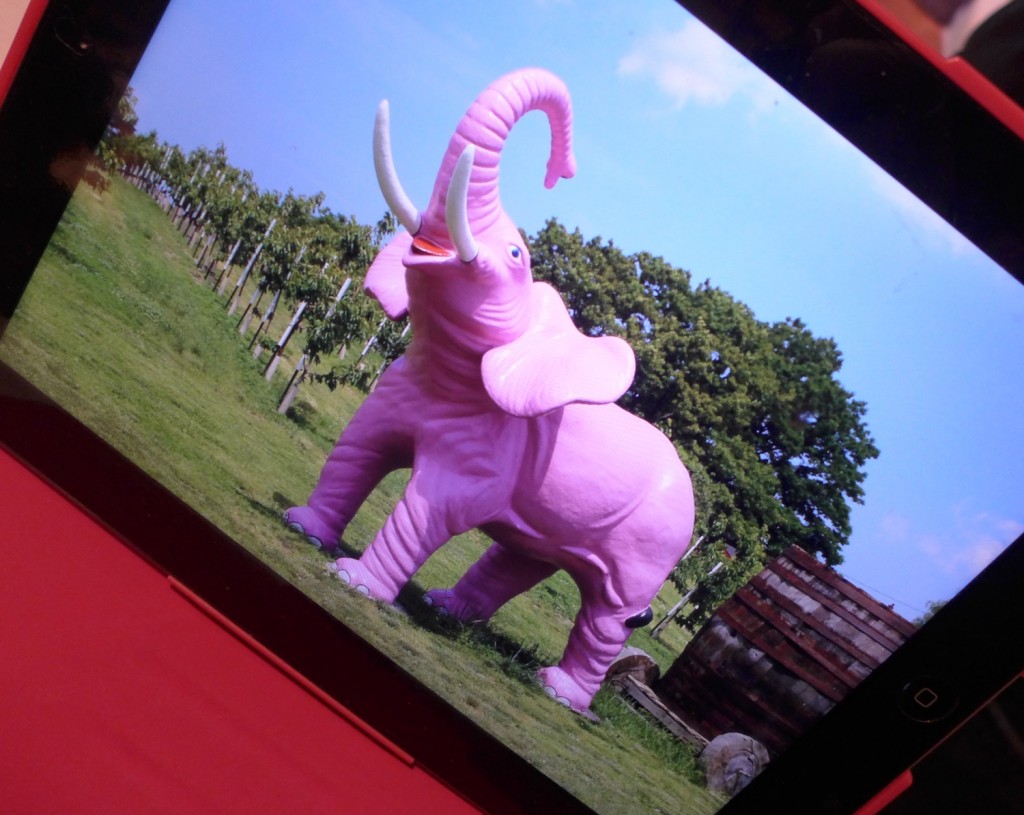 Today I was at the NY DRINKS NY Grand Tasting of New York State wines here in New York Wine City (NYWC) and although I’ve been exploring the state’s wines quite intensively for almost a decade there were still some eye-popping surprises today, not least at the stand of 21 Brix Winery in Portland/New York. Not only does 21 Brix have a life-size pink elephant on the property they also make dry Riesling, of which the 2012 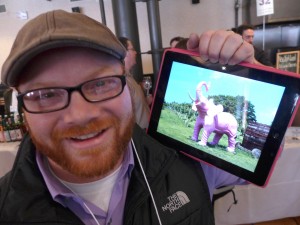 was light with 11% alcohol and crisp in the Finger Lakes mold, but more delicate in flavor. Congratulations to winemaker Kristopher Kane (pictured left) for distinctiveness as much as for quality! He also makes a remarkably deep-colored, powerful red in 2012 from the Noiret grape that I’d never come across before. To be honest, I’d never tasted any wines from the south shore of Lake Erie before!

Although I was feeling pretty weak today as a result of some virus hitting me hard my nose was clear, so I tasted all the dry, medium-dry and sparkling Rieslings I could find at the tasting, which was 34 wines.  The great majority of them were 2012s from the Finger Lakes (FLX) and they underlined just how good – aromatic, juicy and lively, but seldom stridently tart – this vintage is. There were not enough 2013s there for me to form a clear opinion of the latest (mostly 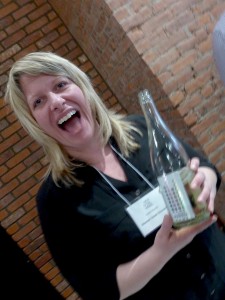 unbolted) vintage, but Kelby Russel the winemaker of Red Newt/FLX had showed me a couple of single-vineyard wines from their cellar the other night which were impressive. Let’s say it certainly tasted better to me than the slightly lean and tart 2011 vintage, some wines form which are aging rather fast. There was one innovative Riesling from 2013, the ‘Bubble’ Secco type sparkling from Atwarer/FLX. They’ve produced this before, but now it has that simple catchy name and they’ve cracked the balance apple and lemon pie aromas, crisp acidity, a touch of sweetness and added bubbles. It is a great Riesling party wine. The packaging is also really cool too. No wonder Katie Marks looks so pleased!

Some of the wines I enjoyed the most were just a shade too sweet to qualify for the designation “dry”, like the confusingly labeled, but delightfully floral and elegant 2012 Dry Riesling from Glenora. The 2012 Riesling from Lakewood Vineyards is a charming wine with quite a long creamy finish, but doesn’t tell you straight up on the label if it’s dry or not. Then there’s the confusing “Semi-Dry” designation which is not legally defined and can mean almost anything. I found just one wine labelled “Medium-Dry”, a designation quite precisely defined by the International Riesling Foundation (IRF, see www.drinkriesling.comfor more info). Congratulations to Leslie Arduser-Brogan of Casa Larga for having the self-confidence and for the chambering wine. The argument that it is an unsexy description that won’t move bottles off shelves doesn’t hold up, because Pacific Rim in Washington State turned their “Sweet” Riesling (theoretically an even more unsexy designation) into a million bottle brand! I think people like knowing where they are and the IRF taste profile mostly tells them quite or very accurately. Please Riesling producers everywhere, drop “Semi-Dry” NOW!

Wagner Vineyards, one of the winemaking giants of the FLX, surprised me with their charming, but also substantial dry 2012 Caywood East Vineyard Riesling, the best wine I’ve ever tasted from them. Their Sparkling Riesling is one of three wines of this type from the Finger Lakes that prove this category has a great future (together with the Célèbre from Dr. Frank and the Riesling Cuvée from Swedish Hill). I wondered why I couldn’t remember tasting the Rieslings from Hazlitt 1852 Vineyards before, because their 2012 Homestead Reserve was one of the best single vineyard wines I tasted today, topped only by the medium-dry 2012 Red Oak Vineyard Riesling from Mark Wagner. 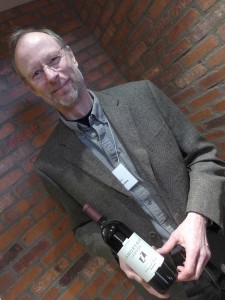 Mark also poured my favorite red wine of the day, his 2010 Caberent Franc (which like his single vineyard Rieslings costs about $20). It was full of floral aromas (including violets, if that isn’t too pretentious), not a whisker of green bell pepper and has great balance of ripeness and freshness; a joyful red wine with lots of character! The 2010 Cabernet Franc form Hazlitt 1852 Vineyards was in a rather similar style, also sporting bright fruit and gentle tannins. Even lighter and less tannic, but with a bright redcurrant note and a hint of pepper was the 2012 Cabernet Franc/Lemberger from Anthony Road. You certainly can’t say the challenging 2010 Lemberger from Fox Run had moderate tannins, but it pumped out the pepper aromas like a factory working overtime: a love it or loathe it wine! I will pass over the seriously interesting red wines and eccentric whites made by Alie Shaper of Brooklyn Oenology Winery based in Williamsburg and wait to write a full report on them later in the year. It was as loud as in a cool NYWC restaurant towards the end of the tasting and I feel beat. Please excuse me so I can crash on the sofa for an hour or two to recover!