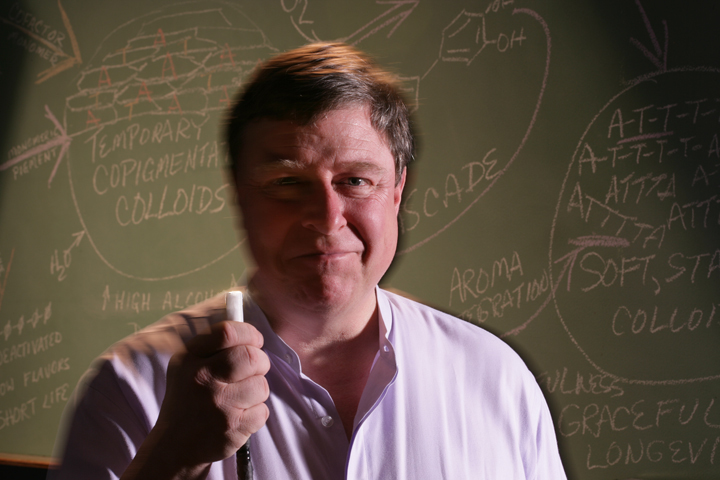 For a moment yesterday afternoon I was lost in the designer basement of the ACE Hotel on West 29th Street. Which of the many black doors was it behind? I decided to start “at the beginning” with the door with a big white A on it, and when I opened it I found Clark Smith and the audience for his tasting of American wines. I’d met the author of the brilliant ‘Postmodern Winemaking’ (University of California Press, 2013) on Saturday evening at Lisa Granik MW’s dinner table in the snowy wilderness of Brooklyn, but that conversation with him barely prepared me for yesterday’s tasting.

He began with some general, yes, sweeping assertions. “The paparazzi of the wine industry have hit us with the accusation of manipulation.” He was talking about my profession, and I cast nervously around the room to see which of my colleagues were there, but apart there were no other wine journalists present, in fact the New York Wine City (NYWC) scene was conspicuous by its absence. “It is my view that all winemaking is extremely manipulative. It’s all about artisanality,”he continued. Of course, artisanal derives from art, which we in the West instinctively contrast with nature. Today “natural” and “authentic” are crucial words for the wine scene and not only in NYWC, but when I hear them I often wonder what my colleagues are really talking about. From the beginning of the tasting we were in deep waters, but I gladly let myself be sucked into Clark’s maelstrom where so much conventional thinking gets turned upside down.

The first two wines were both 2003 Chardonnays from Wine Smith, Clark’s own micro-winery for hi-end bottlings. The first had an alcoholic content of 12.9% and the second of 14.8%, and no wonder we all preferred the first of them! With it’s aromas of lemon oil and lees funk (technical term: sulfides) it was very much in the Chablis mould. Best of all it had a mineral freshness at the finish (it was remarkably fresh for a 10 year old Napa Chardonnay) which was not dependent upon the wine’s (moderate) acidity, just as the mineral note in good Chablis isn’t. In contrast, the second wine was hot and bitter with none of that freshness. Then Clark hit us with the horribly truth: the first wine with it’s “terroir” character was made from the same grapes as the second, but had just shy of 2% alcoholic content removed from it through the use of reverse osmosis (which Clark describes as, “just a really tight filtration). So, the wine which we journalists would regard as manipulated tasted better and had the “terroir” character we’re looking for!!!

Then came the next bombshell in the form of the 2005 ‘Crucible’ from Wine Smith, a Napa Valley Cabernet with medium-body and the kind of dry fine-grained tannins that the NYWC and other wine scenes tend to associate with Bordeaux and find very cool. After we’d all praised it Clark revealed that it has, “lots of Brett”. Brett is short for Brettanomyces, a type of yeast that lives in wine barrels (and sometimes other places). If it becomes too active can give the wine a smell of band-aid or horse stalls. Of course, that’s negative, so how did his wine have so much Brett, but lack those ugly aromas? “By knitting together the wine’s structure with oxygen,” was Clark’s answer. What he means is that if the maturation process goes well (something the winemaker strive for), then the tannins, color, aroma and other substances in red wine “build structure” giving it a “soulful resonance”. Then aromas like Brett, that can stick out like dog balls, become subsumed in the whole and are no longer directly perceptible. More deep stuff for a Sunday afternoon! 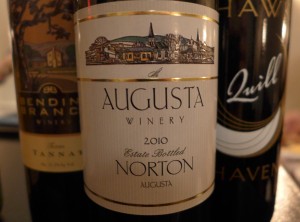 Additional examples of structured reds followed in the form of under-appreciated American wines like the cool, lively 2007 Cabernet Franc from Jamesport Vineyards on Long Island/New York with its nose of raspberry and lemongrass, a graceful wine for this grape with polished tannins and no hint of green bell pepper (a Cabernet aroma I hate). The 2010 Norton from Augusta Winery in Augusta/Missouri just a short drive west of St. Louis was one of the best wines I’ve tasted from this grape (that from Chrysalis Vineyards in Middleburg/Virginia being the other star). I loved its bitter chocolate and blackberry character, and it was a seriously concentrated with generous supple tannins. That’s pretty amazing for $18.93 direct from the winery! More extraordinary still was the 2012 Petit Blue from Hermit Woods in Meredith/New Hampshire, which provoked a lot of discussion when served blind. However, nobody got the reason for the great berry aromas: It had actually been made from wild blueberries. “I heavily manipulated it!” winemaker Ken Hardcastle with an wry smile. However, it did not taste one dimensionally fruity (there were some discrete tannins) and it had great balance. Maybe I’m amazed! 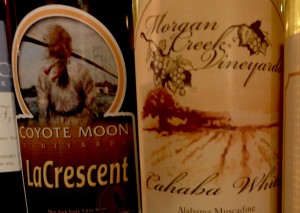 By this point the entire audience was reeling in the best possible way. Then came the whites and amongst them was the single most surprising new wine I’ve tasted in a long time. It too was served blind and from its peach, passion fruit, grapefruit and floral aromas you could have thought that it was a young Riesling from a cool climate region. In spite of the delicious interplay of a juicy grape sweetness with a bright acidity and those aromas I immediately sensed that this couldn’t be a Riesling. But what the hell was it? It turned out to be from the Le Crescent grape, a new hybrid from Minnesota, made by Coyote Moon  Vineyards in Clayton/New York. I’m not talking about Long Island, the Finger Lakes or even the Hudson Valley though, for Clayton lies on the St. Lawrence Seaway! Although it has won a slew of medals including Best of Class at the San Francisco Chronicle’s wine competition, direct from the winery it costs just $14,95! Then came the Cahaba White from Morgan Creek Vineyards in Harpersville/Alabama, a Muscadine with an eye-popping bouquet that reminded me of my rare childhood candy orgies, but was delicious in an entirely adult way and costs just $10.99 direct from the winery.

Because more than 20% of all American vineyards are planted with Chardonnay and the big brands of Chardonnay dominate grocery and supermarket shelves right across America  – something that the handful of big Cabernet Sauvignon, Merlot and Pinot Grigio brands also do – so the majority of wine drinkers here have no idea that such wines exist, never mind how good they taste. The American wine market is one huge optical illusion which creates a no less widespread “taste illusion”! 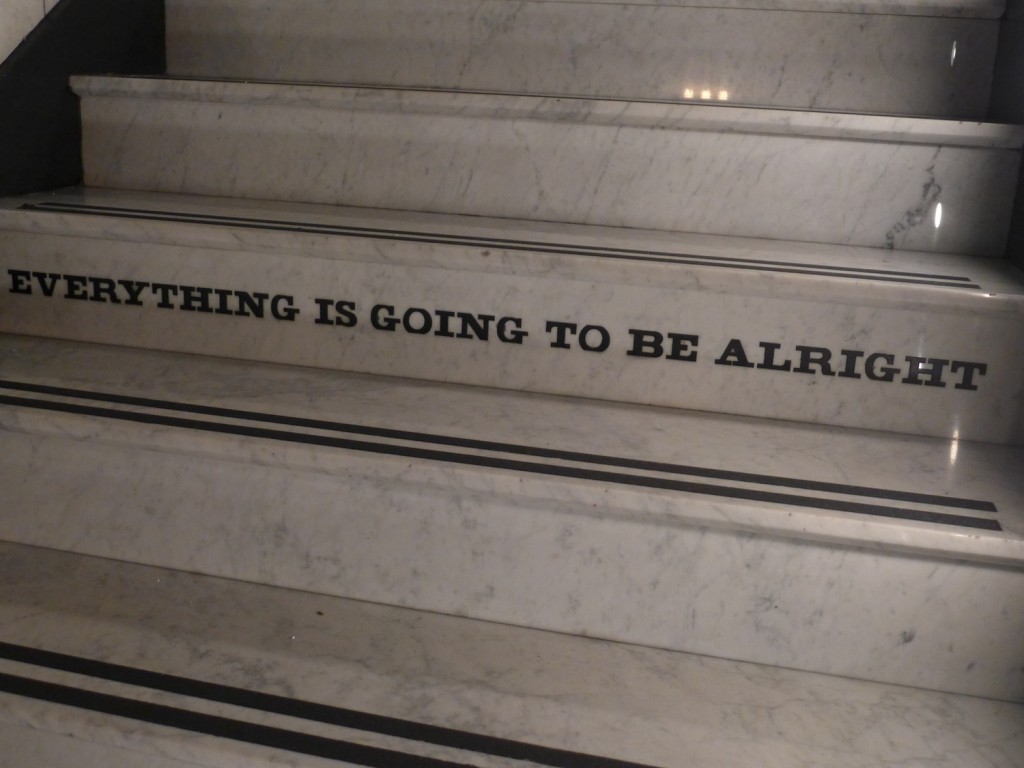 I share Clark’s belief in the enormous potential of the other wine regions of America (i.e. those outside mainstream California) and the other wine grapes (i.e. those that are not Chardonnay, Cabernet Sauvignon, Merlot or Pinot Grigio), and this tasting was a very convincing argument in their favor. What made it one of the most amazing tastings of my life was the way Clark’s thoughts on so many of the key issues for the wine industry and for wine drinkers in the 21st century were interwoven with the actual tasting.

“The revolutions in wine are not the work of scientists,” the scientist and winemaker explained, “but of lunatic heroes who try stuff which orthodox thinking says should never be tried. There’s maybe a 3% success rate, but once in a while something really works.” Yesterday’s tasting had a success rate many times that and I felt that it was also just the beginning of a great journey of discovery to the unknown Wine America.