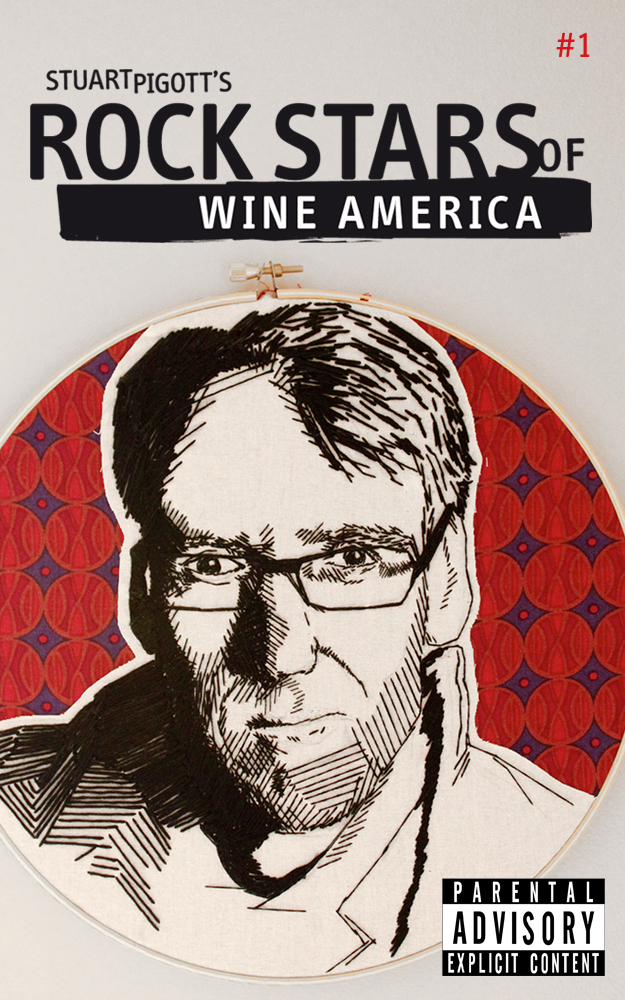 Yes, ROCK STARS OF WINE AMERICA #1 is completely outrageous and coming very soon on Kindle. There was no alternative to applying the Parental Advisory Explicit Content sticker to the cover of my new work, pictured above, because of the no-holds-barred way that the first of this series of stories about wine, America and I is told. Already the first paragraph of the main text (there is a brief introduction before that) pushes the envelope of what you can say in a wine book all the way to the limit, and then some. I promise you that this was not just a willful act of provocation and I’m not only trying to shock and awe. Rather, it is the logical consequence of deciding to tell the story of my first experience of America without hesitation or obfuscation.

This is the backstory to a series of tales about the underground rock star winemakers of America that will follow during the coming months and years, and its purpose is not only to explain how this project started, but also to set the tone for all that will follow. During the last years I often said that wine is a third world region of journalism, meaning that the research was often poor, probing questions were not asked, uncomfortable issues weren’t raised, nor was accepted wisdom was not called into question, much less did the story have even a convincing progression from beginning to middle to end, nor was there anything compelling about the whole that would compensate for these weaknesses. Instead, it more or less did the modest job it was supposed to do, neatly filled the slot allotted to it without particularly upsetting or pleasing anyone, the writer collected the fee (writers generally don’t receive a salary) then didn’t really worry that the readers weren’t so interested in what he or she had written. Don’t get me wrong, I’m not saying that all writing about wine is like this, but all too often this is a fair description of what is written about wine, and of how it is written.

My new work tries to radically break with this, and unashamedly seeks to surprise and entertain to the max, because this is the way to grab readers’ attention. I wouldn’t have written this story first if it hadn’t been for the fact that when I told it people begged me to write it down. I wouldn’t have been able to publish it so quickly and easily were it nor for the possibilities that e-books open. However, you must tell me if I am on the right track, or have maybe even succeeded in my radical goal. By clicking on the link below you can order now for delivery early on the day of publication, Sunday, September 27 of the year of Our Lord 2105. The price is just under $5. Those of you who don’t own a Kindle also have the option of downloading the free Kindle app onto an iPhone or iPad and reading it there.

The cover features a work by the young New Jersey based artist Angelyn Cabrales who will also be responsible for the cover art of the next issues of ROCK STARS OF WINE AMERICA. Please be patient, very shortly, there will be a story here about the making of the work pictured above. Perhaps some of you can guess the medium she uses before that story appears in a couple of days? Using a completely contemporary image for the cover of this story set in Baltimore many years ago is my way of announcing that this is no exercise in nostalgia, rather I have tried to describe those events as if they happened yesterday. This wasn’t difficult because they were so very colorful, packed with sex and love, very bad PR, a declaration of war, alcohol, vomit, corpses and cockroaches. If I’d tried to make up a great story I wouldn’t have come close to this true story. And although the wine content is on the low side compared with the stories that will follow, it was enough to persuade me to return to America and to make NYWC (New York Wine City) my second home.