London Riesling Diary: Day 2 – Vaughn Tan and the View thru the Windshield instead of the Rear-View Mirror 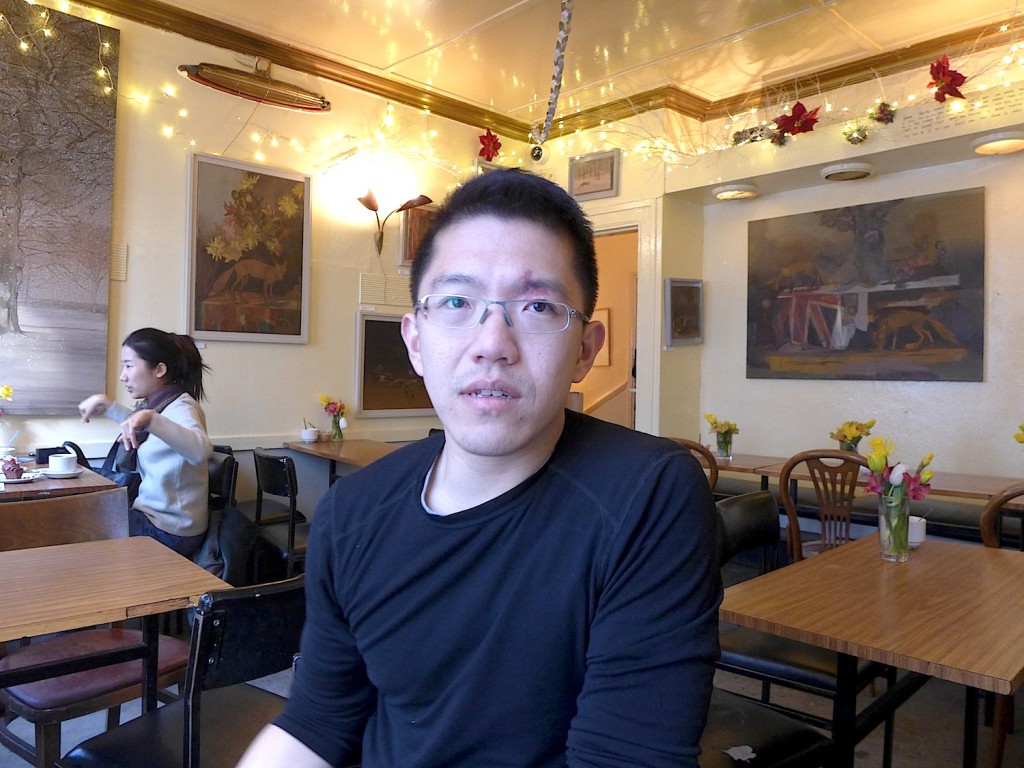 Vaughn Tan is one of the most interesting people I ever met. From the moment he opened his mouth the first time we met in a Cambridge/MA café on a snowy afternoon in early 2012 I could tell that we were what are simplistically called “kindred spirits”. This was and is extraordinary considering that Vaughn is a radically new type of sociologist and I’m trying to be a radically new type of wine guy. He grew up in Singapore and I did so on the edge of London. That first brief conversation opened up multiple new vistas of thought for me, and simultaneously encouraged me that my rejection of the conventional way that wine authors focus on the wine in the glass in favor of seeking out as many connections between it and the rest of the world as possible was the right path for me to follow. This is what my forthcoming book BEST WHITE WINE ON EARTH – The Riesling Story (Stewart, Tabori & Chang from June 2014) does.

So it was probably inevitable that when I met with Vaughn earlier today in Maison Bertaux on Greek Street (my favorite café in the city and so much more than just a café) I should begin by returning to that point. “I think the type of wine journalism which focusses in on the wine in the glass to the exclusion of everything else is a lie. The problem is that it pretends that there aren’t all these connections between the wine and the rest of the world, beginning with how it got in that glass on this table.” Actually only cups of coffee and tumblers of water were on the table in front of us, but that same argument could equally be applied to them.

This set Vaughn talking about how his efforts to find a publisher for a book on “new food” have run into some difficulties, because the editors of publishing houses insist on regarding it as a Food Book, rather than a book about the interconnection between cooking, creativity, agriculture, the economy and the entire social dimension. That’s too big and too new for them, so they scuttle for safety on what they think is the firm ground of conventional food literature and what they call objectivity. For Vaughn (and I) the latter is complete nonsense as there is no objectivity, only continually shifting activity, ideas, sensory impressions and emotions. We feel the most honest thing to do is not only to present things in their context (i.e. how the wine got in that glass on that table and what that means to people in the situation it’s consumed in), but also how we came to the conviction that those things and that context demanded our attention. For us, the why and how of reaching our conclusions are inseparable from the conclusions themselves. We go a step further than Nietzsche when he wrote that, “the context is the facts”.

“How long have you been in Las Vegas?” Vaughn suggested I ask him, which seemed like a strange question considering he recently began three years of teaching at University College, London . I felt a bit silly as I dutifully threw back the question, although everything Vaughn ever suggested I do turned out to be right. “About five weeks,” was the beginning of a long story about the “Anti-Strip” of Vegas, a city I had a short and sharp introduction to last summer. He was referring to Spring Mountain Road, which is composed of a string of strip malls where a food revolution is clearly happening. That took me back to Hunter S. Thompson’s ‘Fear and Loathing in Las Vegas”  and made me start feeling I ought to go back there with Vaughn as a guide. Last summer when I was there briefly for the first time I felt that I completely failed to find a story worth telling about the city.

“Las Vegas is a place which seems to be predicated on chance, but actually it’s not, it’s based on risk.” Obviously out on Spring Mountain Road a bunch of chefs are taking some serious risks that have nothing to do with the huge casino-resorts, but may express some new American Dream. Surely this is a great food story and my guess is that there’s a wine story in there too. However, if you’re thinking in terms of conventional food literature and objectivity, then you won’t see it because your gave will be fixed on the rear-view mirror instead of looking at what’s in front of you thru the windshield.