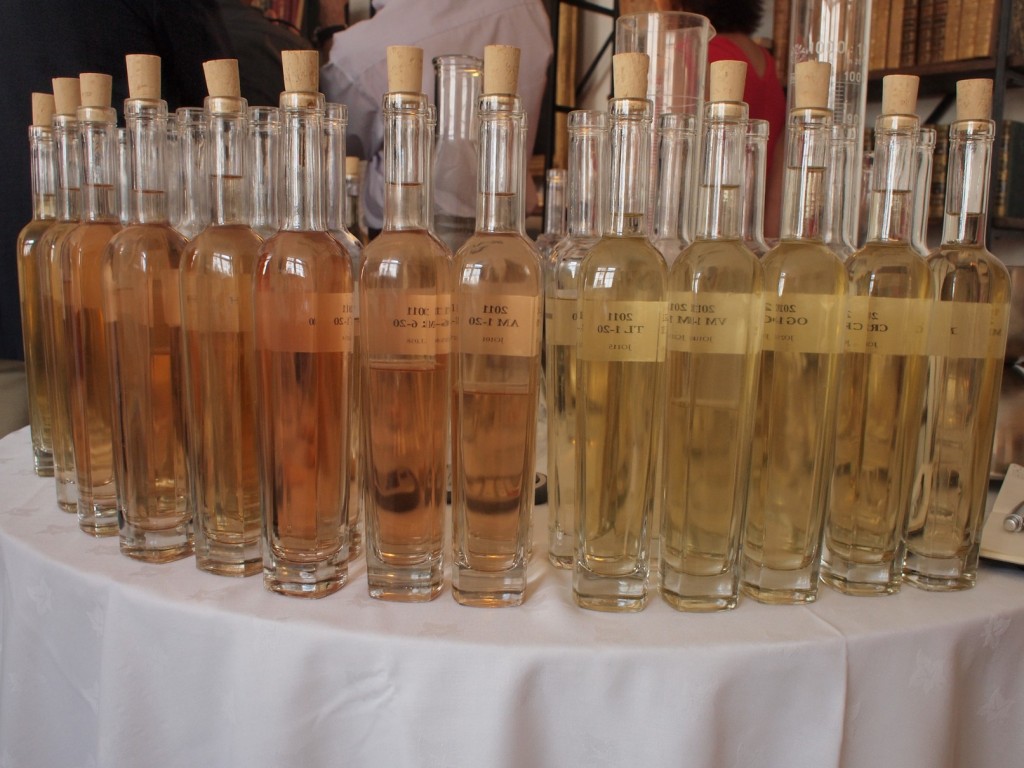 Take the STUART PIGOTT RIESLING GLOBAL Acid Test now to find out the acid truth about wine, the whole world of taste, and to discover your own personal acid limit!

Some people clearly long for an acid-free world even more than they desire wealth, success, fame or hot sex. I sometimes bump into wine drinkers who imagine that if only the acid could be taken out of wines rich in natural grape acidity like Riesling, then the world would be safe for democracy, stocks would enjoy a continuous bull market and Elvis would rise from the dead. Dream on!

The fact is that without enough acid wine – not just Riesling, but all wines, white, red, rosé, dry or sweet – tastes bland and lifeless, instead of fresh and lively. In fact, the same applies to almost everything we eat and drink to some degree. On the other hand too much acidity obviously turns Riesling sour, no less than it does other anything else we eat or drink. The Big Questions for wine drinkers  is where does fresh end and sour begin, and at the other end of the scale where does fresh turn into bland?

Acidity, or occassionally its opposite alkalinity (for example Japanese ramen noodles), is a fundamental aspect of all taste experiences. Those suffering from acid-phobia often seek a simple rule that will enable them to avoid ever putting something sour into their mouths again. However, there’s no such thing, because the threshold between fresh and sour, no less than that between fresh and bland, is highly personal. They depend upon those key taste experiences that etched themselves into your sensual memory (which holds on to memories much more tightly than our intellectual memory does) and our everyday eating and drinking habits.

This is the reason why a particular wine which strikes one person as being too tart is pleasantly refreshing for someone else. Some acid-hounds are obsessed with the analytical acid content of Riesling wines – “wow, this one has 10 grams per liter acidity, that’s 1%!” I know a few who collect these numbers like other people do football results. Sorry guys, but you’re on the wrong track. Those numbers tell you zilch about how the wines actually taste.

The only number which gives a good idea of how tart or soft a wine tastes is the pH. Anything with a pH reading lower than 7 (neutral) is acidic, and the lower the figure the more intensely acid it is. A chemist can take a sub-7 pH reading and calculate the concentration of hydrogen ions, that is naked protons, present. The naked proton – add a single orbiting electron and you get a hydrogen atom – is the active part of all acids. I bring up all this science only to make it clear that I’m not pulling this stuff our of the air just to boost Riesling.

When you pick a wine to drink it’s really helpful to know how much acid you really enjoy. That’s why I developed the STUART PIGOTT RIESLING GLOBAL Acid Test. It’s based on FDA pH data for foods and beverages plus a bunch of figures for various wines which I collected over the years (thank you to all those winemakers who were open with their figures). It enables you to quickly and easily determine what your personal acid limit really is.

Start by looking at the list of drinks, fruits and other foods in category 1 and if you regularly consume one or more of them note that fact, then move onto to the next category and so forth. The highest category in which you find at least one food or beverage you often enjoy consuming is listed is your personal acid limit.

most branded sparkling wines and Champagnes

also most sweet German Rieslings, particularly those from the Mosel, Nahe, Rhine

sweet and dry Rieslings from the Finger Lakes, Michigan, Oregon, Ontario, BC,

Many people who take the Acid Test are seriously shocked to find that they score 9, because they drink soda and/or cola with pleasure. Often they don’t think of themselves as actively seeking acidic flavours and sometimes they describe themselves as either being sensitive to acid or actively avoiding anything tart. Almost everyone makes it to 7, because of orange juice. These beverages are perfect examples of how sweetness alters our perception of acid, making it seem pleasantly fresh rather than painfully sour. If it’s a hot day and you’re thirsty that magnifies this effect, which is a perfect example of how the situation exerts a major influence on our taste preferences.

This may come as a shock to some wine geeks and somms, but when it comes to the interplay of rather intense acidity (i.e. low pH) and sweetness there’s a fundamental similarity between soda/cola or orange juice on the one hand and those “classic” German Rieslings from the Mosel, Nahe and Rhine in category 8 with their crisp acidity and pronounced grape sweetness. None of these beverages taste that sweet to most of us, because their acid partly masks their sweetness. Anyone used to drinking soda or cola should therefore find the acid in those wines or the other sweet Rieslings in category 8 pleasantly refreshing.

In contrast, they might find the dry Rieslings in category 8 too tart. The reason for this is that they have almost no sweetness to clothe their abundant naked proton content. Only the minerals they contain (which taste slightly salty) help moderate their acids, and that’s why those minerals are so important to them. If often you like them then you’re definitely a bona fide acid-hound! But then anyone who scores 9 or 10 is also an acid-hound.

Also in category 8 are high end Champagnes, which also have very little sweetness. Their acids are balanced by the creaminess they gain through years of contact with the lees (dead yeast) in the bottle. As those yeast cells slowly break down they release proteins which create that creamy impression. No less than the the dry Rieslings in the same category, high-end Champagnes have a special taste which you either love or you simply don’t go for.

At the other end of the scale there’s a clear link between less-pronounced acid and the type of wines which my colleague Robert Parker likes, the championing of which made him the world’s most influential wine critic. Clearly, when it comes to full-bodied red wines and heavy-weight whites a large group of consumers are seeking out this lack of acid. Often they refer to this as “ripeness”, but these wines generally also have is a slightly sweet taste, because they contain too little acid to mask the impression of sweetness that comes from their high alcoholic content.

An important last thought. Although the category to which each wine, beverage and food belongs to doesn’t change, people certainly do. Habit and familiarity play a huge role in shaping what we like to eat and drink. As anyone who can remember their first cup of espresso (very bitter) or their first piece of sushi (raw fish) knows it’s possible to change your eating and drinking habits radically.