Berlin Riesling Diary: Day 0 – Anarchy in the UK, the USA, the FRG and Everywhere Else on Planet Riesling 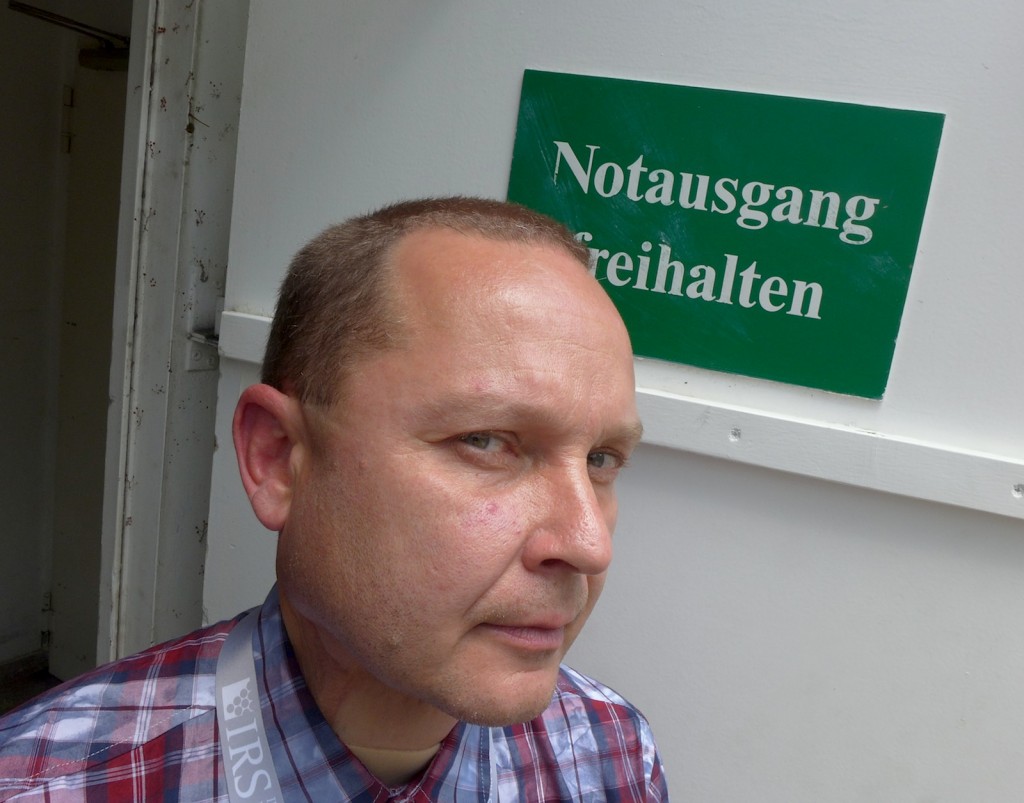 „Riesling is anarchy!“ The words were like an electric shock that was administered not just to me, but to everyone sitting around the long table in Restaurant Marcorbrunn in Hotel Schloss Reinhartshausen (Rheingau/Germany) yesterday during the press lunch of the International Riesling Symposium. “Growing up in England during the late 1970s the concept of anarchy, if not the practice, was very appealing to me,” continued Andrew Hedley (pictured above), the winemaker of Framingham winery in Marlborough/New Zealand since 2003. “I found anarchy in Riesling and it changed my life. If it can happen to me, then it can happen to anybody, and be something positive in the world.” For a moment there was stunned silence, then spontaneous applause from the entire table. I’ve put some bold statements about the Riesling Spirit up on this blog, but Andrew’s words suddenly made all of mine seem horribly hesitant and cautious.

All of this occurred against the backdrop of the excessively restored architecture that makes Schloss Reinhartshausen a kind of Disneyland dedicated to Prussian history (it used to belong to the Prussian royal family). This gave Andrew’s words a piquancy like that which the Sex Pistols hit ‘God Save the Queen’ had when it was released in Queen Elizabeth II’s Silver Jubilee year of 1977. Nobody doubted the rightness of his words at that moment for two reasons, most importantly because the tasting of dry European Rieslings that Cornelius and Fabian Lange had just expertly presented had forcefully reminded us all how Riesling’s enormous diversity cannot be reduced to a simple formula of any kind. Also, in the back of all our minds was how the day before at the end of the tasting of “New World” Rieslings I presented the 2013 Auslese “F” from Framingham had stunned everyone with its enormous racy elegance. It was the revolutionary behind that Riesling masterpiece who said those daring words.

Of course, I could have tweeted all of this straight away in so-called “real time”, but the advantage of this blog over twitter is not only that here I have more space than twitter’s pulp-fiction-haiku format allows, but also that the “time-lag” between the events and my reporting of them is time for reflection. During that time it occurred to me that even though the logo on my masthead was developed by young German designer Alexandra Weiss (Danke, Danke!) in the spring of 2012 it is in a tradition whose roots lie in the punk rock graphics of the late 1970s. I fear that it’s often been the most daring thing about this blog! Allowing more of the life-giving anarchy of the Riesling Spirit to express itself here is something I’ll be working on during the coming weeks as the publication of BEST WHITE WINE ON EARTH – The Riesling Story by Stewart, Tabori & Chang in New York on June 17th approaches. As always I’m open for your ideas, particularly if they turn out to be better than my own. That is in keeping with the fundamental nature of anarchy. It’s striking how in everyday situations where theoretically there’s no room for anarchy it keeps breaking through the grid of rules and regulations with which officialdom seeks to force truth, beauty and all that’s good in this world to submit to the stultifying influence of rigid planning and at least play dead. Dear Riesling fans, is that what any of us want?

One Response to Berlin Riesling Diary: Day 0 – Anarchy in the UK, the USA, the FRG and Everywhere Else on Planet Riesling