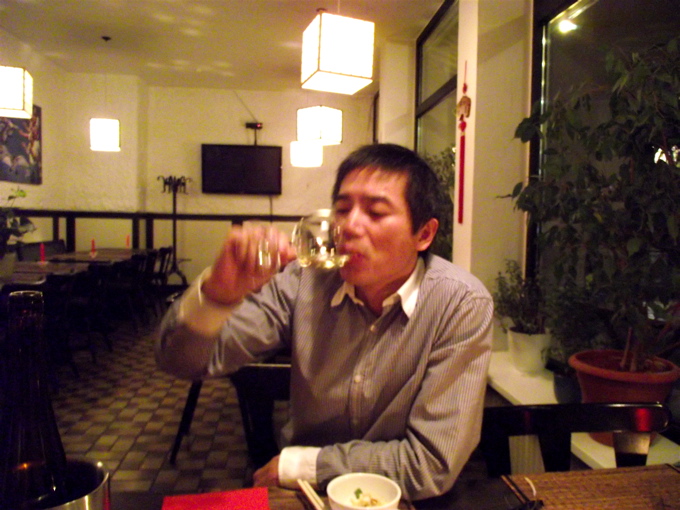 The restaurant Hot Spot on the corner of Kurfürstendamm and Eisenzahnnstrasse is about as unassuming as a restaurant can be. At three in the afternoon, the place is empty except for two suited co-workers sipping soup, and a woman in sweatpants waiting for a take-out order. I am greeted by the owner Jianhua Wu, whose name means build up China, is the recent subject of a top-rated New York Times article, and the man behind the best wine list at a Chinese restaurant in all of Berlin, probably Germany, and possibly the world.

It’s hard to imagine that wine is a major player on the Hot Spot menu, especially when no one seems to be drinking anything but tea and there is only one noisy cooler filled with chilled whites in sight. But scanning through the menu reveals quite another story. First of all, the menu is split roughly in half, the first half contains dishes like Gebratenes Shanghai-Gemüse for 11€. On the wine side of the menu, there’s a bottle of Château Margaux 1er Grand Cru Classé for just shy of 1,200€. I asked Wu how many bottles of this impressive wine he carried, and he said, “Two. I had three but I drank one. It was a very excellent wine. 1990 is an exceptional year.”

I should mention here that Jianhua Wu is a sprightly man who could be anywhere from his late 30’s to his early 50’s. He looks at you with friendly concentration when he speaks and he speaks softly and slowly, taking long pauses that suggest he is no rush for the interview to end. He also speaks in German, which meant that I must speak in German, which is not a language I am used to interviewing people in. I am positive I am making mistakes, abundant and embarrassing mistakes. Jianhua Wu does not let on that he notices. It must take a lot of patience on his part to do this.

Wu moved to Berlin in 1984, an easy year to remember if you’re a George Orwell fan or wine fan, because both associations with that year spelled disaster. Just about everywhere in Europe there was a catastrophic vintage. Despite coming to Berlin at that portentous time, Wu made the best of things. He studied engineering but quickly changed tracks in order to open an MSG friendly Chinese food stall. From behind a small greasy counter, Wu watched as his adopted city went from one extreme to the other in little more than a decade.

It was around the mid 90’s that Wu started to become interested in wine and it was the wine that changed his fate. He set before himself the almost insurmountable task of creating a restaurant that specialized in sophisticated Chinese cuisine and top class German wines.

Wu refers to himself as an autodidact in respect to wine, and is very quick to mention that his enjoyment of wine is simple and straightforward as opposed to the redolent, heady interest of wine critics and connoisseurs. But he has certainly become a discerning connoisseur and his wine list proves it.

I had the honor of eating and drinking with Wu on what happened to be my 30th birthday. I was not expecting anything but 15 minutes of time from a busy and successful restaurateur. What I got, however, was a five dish tasting menu, a full bottle of wine for each course, an alcohol fueled (though undeniably inspiring) interview and. By 6 p.m., I had one of the most searing alcohol induced headaches I have ever experienced.

The Chinese food at Hot Spot is on quite another level from what I’ve experienced in Berlin. Wu employs both a Shanghai and Szechuan province chef and the menu represents a duel between those two culinary traditions. On one end of the menu are Szechuan classics like crispy roast duck, smoked with tea leaves. This duck was flavorful, well executed, tender and delicate—the kind of dish that makes your brain sing out “Meat!!” On the other end, we ate chicken stir-fried with expertly julienned ginger, lemongrass, and chili. Wu asked me if I enjoyed spicy food and I fumbled through some terribly mangled sentence about taco trucks in LA. But he must have understood me enough to bring out something that I have been waiting 4 years in Berlin to taste—spicy Chinese food. It was a miracle. Suddenly my tongue was alive with the heat of chili and the medicinal sting of ginger. Wu recommended I drink a 2009 Jos. Christoffel Jr. Erdener Treppchen/Mosel Riesling Spatlese along with the stir fry. The cool melon sweetness of the wine was the perfect flavor to quench the spice of the food. I noticed that Wu had a lot of wine from the wine-maker at Christoffel and I asked if he knew the man personally. He replied in this order. “Yes. He is 68. No kids. Never been married. Very nice!” If I am making Wu sound like a typical Chinese immigrant, please allow me to remind you that of the two of us, his German was drastically better than mine. His answers were sharp and pointed only because we were speaking to each other in the familiar language of Ausländer, non Germans forced to communicate to each other in a foreign tongue. In these conversations, subtext is everything. What you say with your face and hands counts more than what you actually say. I imagine that for Wu, speaking to me in this way was like being forced back to his early days in Berlin, before his German was fluent.

Watching Wu drink was also a revelation. He took a moderately full glass and downed it in two neat gulps, as if his throat were a gunked up pipe and the wine was pipe cleaner. I struggled to keep up with him, not used to drinking so much in the day and also determined to express my gratitude for his hospitality. The wines he brought out represented a respectable spectrum of the German wine scene. Wu is a big believer in Chinese food and Riesling and the Rieslings he stocks tend to be light and fruity with a tang of sweetness. The Markus Molitor 2003 Wehlener Klosterberg Spätlese, for example, was filled with tropical fruit flavors like pineapple and lychee. He also had a gorgeous 2008 Friedrich Becker Spätburgunder from the Pfalz. We drank it along side the crispy, tea smoked duck and it had the saltwater/raspberry taste that makes drinking young Spätburgunder such a pleasure.

Between the second and third bottle, Wu and I got friendlier. He mentioned the New York Times article, which depicted Wu as a Chinese-German mascot, and didn’t focus enough on his wine enthusiasm. “I love German wines. That’s enough.” Wu said, a bit woozily. “It’s too much to say that I love Germany as well.” Over a plate of sticky-sweet spare ribs, I let it slip that it was my birthday and Wu brought out a 1983 Christoffel Spätlese, the closest bottle he had to my birth year, which is 1980. I was touched by Wu’s generosity and the feeling that I was important enough to be treated to such a rare bottle. I felt like Julia Roberts in Pretty Woman (minus the hooker part). I had truly been wooed by Wu.