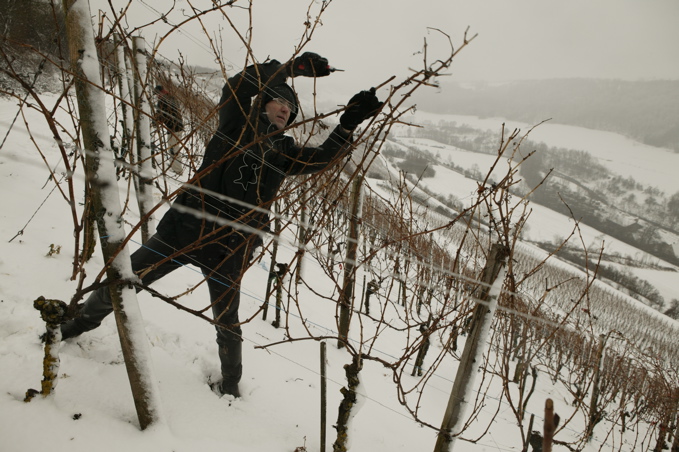 Anyone who watched the fifth episode of my TV series WEINWUNDER DEUTSCHLAND on BR3 at 16:30 Central European Time on Sunday, 2nd January (you can also see it at www.br-online.de) knows that in 2009 I produced my own wine +++ The show was too short to tell the story of that great adventure, but you can find the long version of it in the book of the series from Tre Torri Verlag (see www.tretorri.de) +++ Here there’s only space for the short version starting with the above picture +++ It might look like it was taken yesterday, but it was actually taken by the wine photographer Andreas Durst on Tuesday, 17th February 2009 +++ That was the day I finished pruning the 10 rows each with 40 Müller-Thurgau vines in the Hasennest vineyard site of Tauberzell in the remote Tauber Valley which Christian and Simone Stahl of Winzerhof Stahl in Auernhofen/Franken (see www.winzerhof-stahl.de) leant me for the year +++ Here the combination of the cool climate, limestone soil and SW exposure makes it possible for the Stahls to produce extraordinarily expressive and minerally wines from the humble Müller-Thurgau grape +++ My goal was to produce a powerful and complex dry wine of Grand Cru / Grosses Gewächs format and what I’d learnt in two semesters as a guest student at the famous wine school of Geisenheim/Rheingau convinced me it was possible +++ Within an hour of this photograph being taken my gloves had disintegrated, my ipod was on strike and water was seeping through my „waterproof“ coat +++ 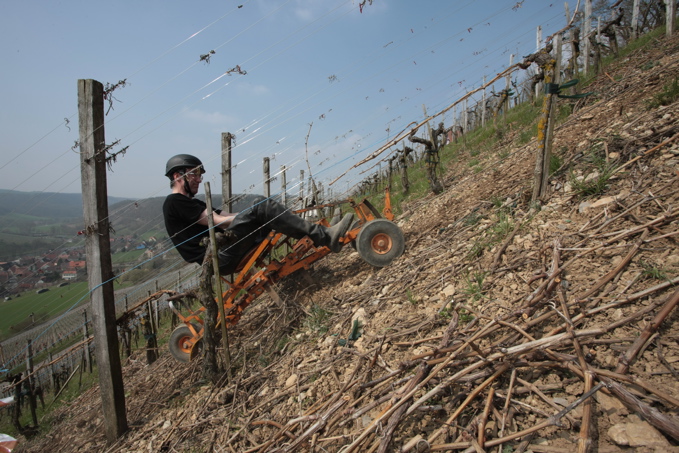 The second picture from Andreas Durst shows my „wine rodeo“ on Saturday, 4th April, that is the ploughing of the vineyard with the Stahl’s winch-pulled plough, and gives a good idea of how steep the Hasennest is (68%) +++ That and my rejection of herbicides for weed control meant that I had to do this with a hoe, which took me eight hours the first time I did it on Wednesday, 13th May; the hardest day’s work of my entire life ! +++ The last work days before the harvest were on Monday, 17th and Tuesday, 18th August when my friend from Geisenheim Helmut Reh helped me to do the „fine-tuning“ that is to make sure every bunch was well exposed to the morning sun and hung freely with optimum air-circulation to minimize the danger of grey rot destroying the grapes before I could pick them +++ Helmut and a bunch of other friends (thank you everyone again !) came to Tauberzell on Wednesday, 30th September 2009 – see Durst photo number three below – to help me pick the grapes and to rigorously separate the clean golden berries from those with noble rot+++ 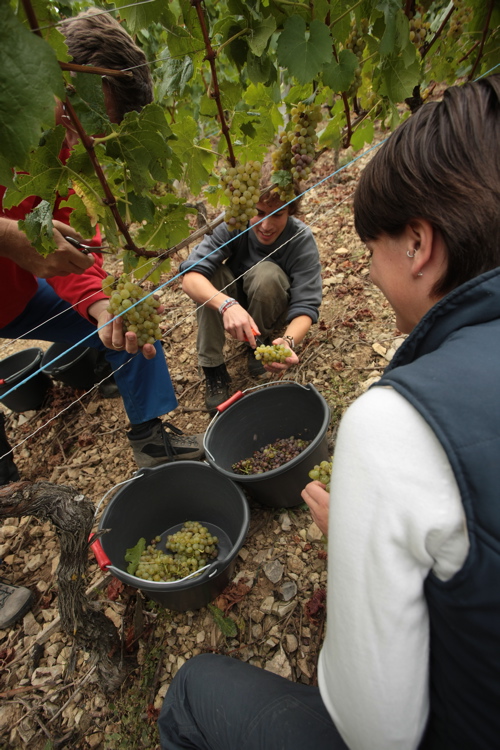 The two lots of grapes were crushed and destemmed separately, but the next day, following 15 hours maceration on the skins, pressing and gravity clarification, the juice from the nobly-rotten berries was so clean I combined it with that from the golden berries +++ Fermentation was with a yeast culture from Weingut Luckert in Sulzfeld/Franken and thanks to the vigour of their „wild yeast“ it only took two weeks +++ Then began the slow process of gently guiding the wine to the best possible harmony despite its 14.1% alcoholic content (all natural) would allow +++ Without Christian Stahl’s advice and help that process certainly wouldn’t have lead to such a good result +++ My wine was bottled on Wednesday, 24th March at which moment I realized just how small the crop had been: 264 bottles or just under 20 hectolitres per hectare! +++ Bottling is a big shock for every wine and mine took months before it started to show well again, so it was good that the official presentation in Berlin didn’t take place until Sunday, 5th September +++ If you want to taste my wine, then come to one of the presentations of the book WEINWUNDER DEUTSCHLAND (thanks to my co-author Manfred Lüer once again !) in the coming spring, but before that you can catch the last episode of the TV series on BR3 at 16:30 Central European Time on Wednesday, 6th January.