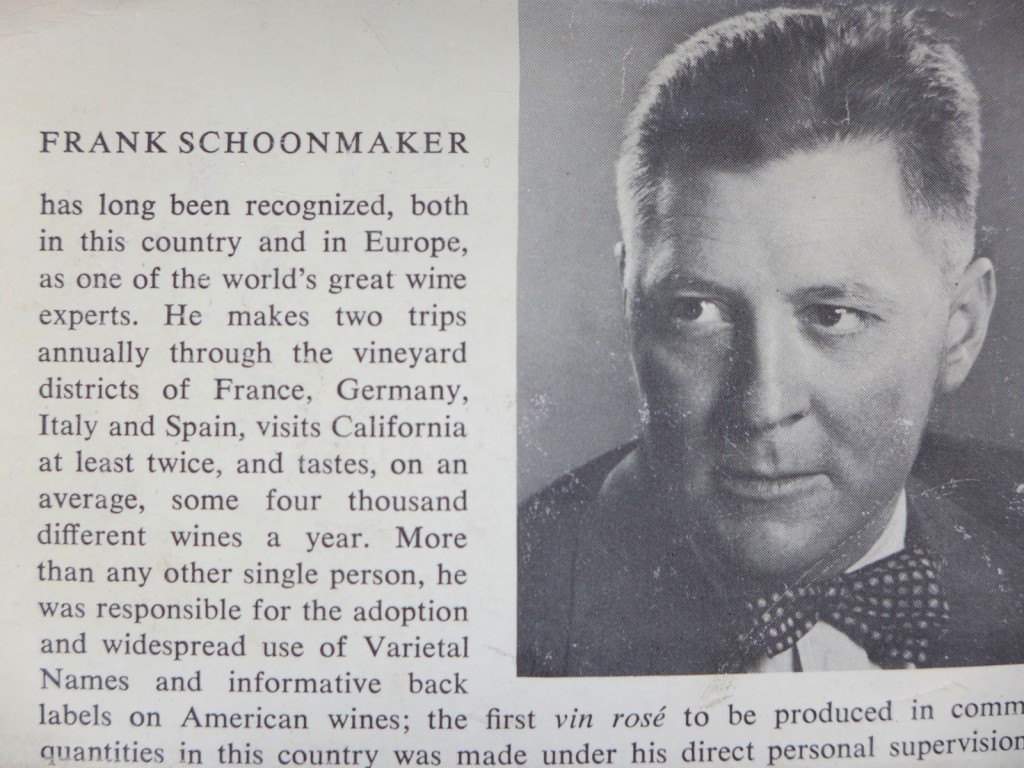 I have to thank the man pictured above, Frank Schoonmaker, for an important piece of forgotten wine truth which I bumped into the other day. I’m something of a living fossil, but even I’m not old enough to have known Schoonmaker in his prime. It seems that after an extremely creative, productive and sometimes adventurous life, in his late sixties he went downhill fast and died aged 71 in 1976. That was the year of my first serious  experiences with Riesling in Germany (more of that story another day).

Schoonmaker was, as the text on the book jacket I photographed indicates, a polymath. Not only did he write about wine, but he was also an important importer of high quality Burgundian and German wines into the US, and a consultant to several large wineries in California. It was the latter which enabled him to add a ten page table of the most important red and white wine grapes in California to his ‘Encyclopedia of Wine’ (1964, Hastings House, New York), which gives a very good picture of the Californian wines of half a century ago. For each grape variety he gives where it is grown in California and Europe (if at all), the area planted with it in California and a personal comment. I almost fell of my chair when I read it!

Schoonmaker gives the area planted with (Johannisberg, i.e. real) Riesling as 450 acres, which does not seem that much compared with the 4,147 acres in 2011 (last available USDA statistics). To put that in perspective, it was almost exactly 1% of the total vineyard area in California, compared with about 0,65% today. However, compare it with the 300+ acres Schoonmaker gives for Pinot Chardonnay (as it was then called) and you see how the world has changed. 50 years ago there was more Riesling in California than Chardonnay! (He gives the North Coast Counties as the centre of production four both, which has also changed considerably). Since then Chardonnay has become the most widely planted wine grape in California with 95,511 acres in 2011. So in 50 years Riesling grew an impressive 820%, but Chardonnay a staggering 27,200%!

Since these two varieties are listed one after the other in the table Schoonmaker’s comments invite comparison. First here are his thoughts on Californian Chardonnay, “Highest quality, very small yield. Its wine is dryer, softer, lower in alcohol than in France, perhaps with less bouquet, but remarkable.” Lower in alcohol than France! That’s certainly not the case today, and there’s no mention of all the new oak thrown at most of these wines now. Now let’s look at Schoonmaker’s description of the California Rieslings of half a century ago. “Highest quality, small yield. In California it’s wines are dryer and yet less tart than the German Rhines and the Alsatians; less assertive and with less bouquet, yet of exceptional balance and class.” Clearly, the Californian Rieslings of this period were properly dry wines with the moderate acidity that one would expect from a climate warmer than that of the German Rhine or Alsace. Obviously, they impressed him at least as much as the best Chardonnays and they were amongst the most subtle Californian white wines of the period. I MUST TASTE THOSE WINES, BUT WHO STILL HAS BOTTLES IN THEIR CELLAR?

It’s also interesting to look further into Schoonmaker’s table. Today, the second most widely planted wine grape in California is Cabernet Sauvignon with 79,290 acres (in 2011) compared with just 800+ acres half a century ago, which means 9,800% growth during the intervening years. Schoonmaker gives Carignan and Zinfandel as the most widely planted wine grapes half a century ago both with 25,000 acres. While Carignan has declined to a mere 3,297 acres, that is by 85%, Zinfandel has grown to 48,354 acres, or just over 93% growth. This looks like a rather conventional figure in this extreme context! The fourth most important wine grape in contemporary California with 45,589 acres is Merlot, but half a century ago Schoonmaker gave the vineyard area as a mere 50+ acres. That means 91,000% growth, which is an average of 1,820% per year! I can’t remember the last time I saw winegrowing statistics which looked anything like that, and I think you’d have to look at the growth of new technologies to find any economic statistics which resemble these. My guess is that during the last 50 years the number of computers in California might have grown in a similar way, thanks to Apple, Intel and Silicon Valley. I never thought that California’s wine industry was as dynamic as it’s IT industry though, but clearly it is and Riesling’s recent growth is part of this.

Thank you Frank Schoonmaker for opening my eyes, and thank you Hajo and Maria Becker of Weingut J.B. Becker in Walluf/Rheingau for leading me that book and others! A longer story on Schoonmaker is in preparation. If any readers can help me with further information about this remarkable man, then please get in touch. I will be in Frank’s home city of New York several times the next months and could meet there (or in California in Early June or Mid July).