Berlin Riesling Diary: Day 13 The World According to Tesch 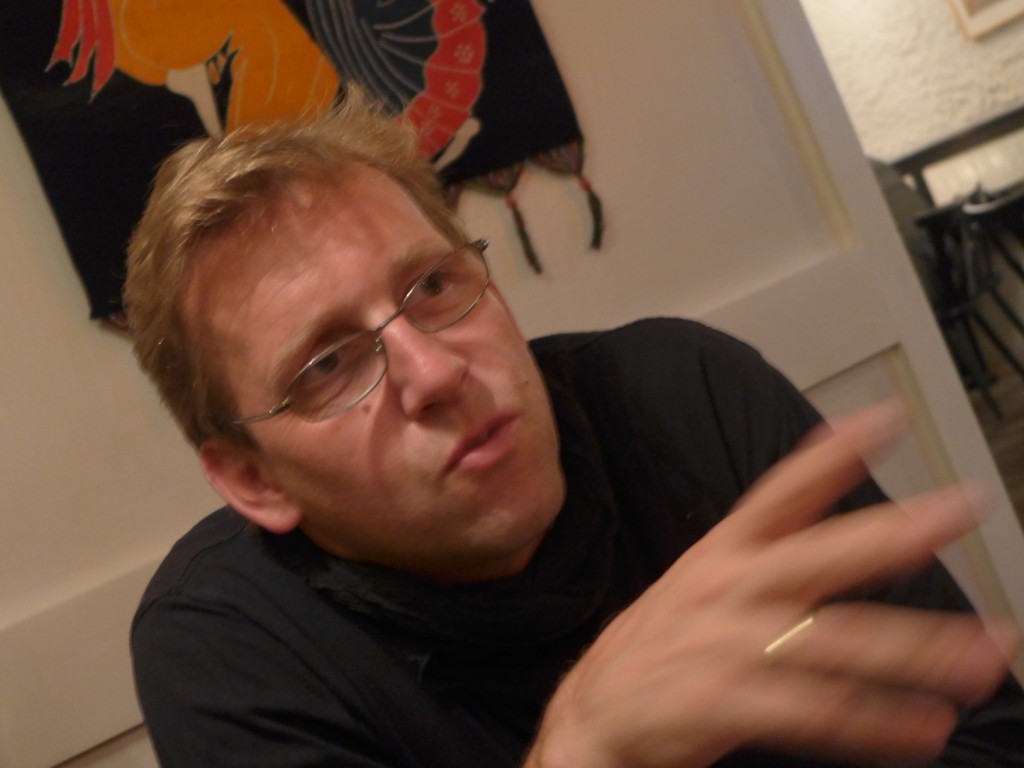 After my dinner last night at the Chinese restaurant Hot Spot in Berlin-Wilmersdorf with Martin Tesch of the Tesch winery in Langenlonsheim/Nahe I can tell you that the world according to Tesch is seriously interesting. Martin’s started by telling me about his event the previous evening at the Weinstein wine bar in Berlin-Prenzlauer Berg where he’d shown a vertical of his dry Riesling from the Krone vineyard site going from the just released 2012 vintage back to the 2002. “It was a Clash of Civilizations!!!” he said, explaining that for part of the audience this all made perfect sense, but another part almost a dozen vintages of the same wine was just too much. You see the Tesch dry Rieslings (which is almost the only kind of wine he produces) appeal to many different groups of consumers, and the wine freaks/nerds are not the most important to him.

“Wine is a beverage,” is the first base of his philosophy which follows that through to the observation that it must be marketed in competition to other beverages. The unique taste of his wines is also their USP and communicating that is a vital part of his work. However, there’s no doubt that – even if he wanted to do it differently – his attitude is part of what he’s communicating with the taste of the wine. To call this personality marketing is to miss the point that his personality would be mere froth, were it not wedded to his ideas and the manner in which puts them over. Luckily for him his let’s-call-things-by-their-actual-names approach to everything perfectly fits the bone-dry straight-down-the-line style of his wines.

Why have many of you you never heard of him before? Well, the Tesch style of dry Riesling and everything which comes with it are not to the taste of all markets. Some people are immediately turned off or irritated by these wines usually because they don’t line up with their expectations of German Riesling – as if the wines from over 50,000 acres of vineyards could all neatly fit in one pigeonhole! Where this reaction is more common than people who are immediately turned on by the wines Tesch necessarily becomes underground, although this is not a role he ever actively seeks.

Here in crazy Berlin – I say crazy, because the wine market here is a bit crazy – the Tesch wines rather easily find an eager audience, though this isn’t quite big or coherent enough to call them mainstream (in contrast I’d say that Jungwinzer Markus Schneider of Ellerstadt/Pfalz has become mainstream, along with established stars like Robert Weil of Kiedrich/Rheingau). Here people like the way the Tesch wines taste and the boldness with which they present themselves to the world. It fits Berlin, where people on downtown street do very much the same thing. 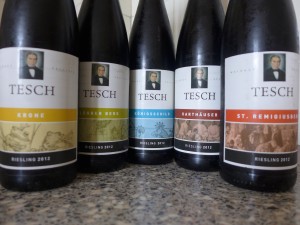 The interesting thing about the Tesch range is that numerically it is dominated by his five single-vineyard dry Rieslings, which are color coded with daring non-wine colors that etch themselves into your nervous system. Sap green stands for Löhrer Berg (empty hill), lemon yellow for Krone (crown), turquoise blue for Königsschild (king’s shield), brick red for Karthäuser (Carthusians) and orange for St. Remigiusberg (St. Remi’s hill). These wines share the cleanness and clarity of his basic Riesling, ‘Unplugged’, but each has its own distinctive notes that recur vintage after vintage, yes, its own personality.

Fundamentally, that is the same idea as for the single vineyard ‘Grosses Gewächse’ (GG) wines which the VDP, Germany’s association of top producers, has been promoting for a good decade. The rules for the GGs changed recently (again) and the VDP has been explaining the new rules with the same enthusiasm that they explained the old rules. It often seems to me that the wines taste like only gets a mention if there is enough time left after the rules have been explained. And the conclusion I have to draw from this is that Germans like making up rules and explaining them, perhaps because it shows them to be upright citizens. There’s also frequently an “anything the French can do we can co too” aspect to this, particularly when the GG wines are referred to as “Grand Cru”. The problem is that it doesn’t help anyone understand the way the wines taste, and because wine is a beverage that’s what it’s all about! That, by the way, is entirely my opinion.

Martin and I discussed the whole GG thing at some length. He makes no bones about the fact that his single-vineyard wines wouldn’t qualify – even if he were interested to market them as GG’s, which he isn’t – because his yields are too high (around 70 hectoliters per hectare in 2012). That is deliberate, and helps prevent the alcoholic content shooting over 13% with the result that the wines start tasting thick and chewy, or even massive.  Tesch’s goal is to avoid these things at all cost, “because then the wines all start to taste the same”. His 2012 single-vineyard wines are anything but homogenous, are at once ripe and refreshing. They are perhaps his best wines to date and a totally convincing expression of the five vineyard sites he’s bottled separately in this way since 2002, which also means that they realize the theoretical goal of the GGs (even if they don’t follow all the rules). 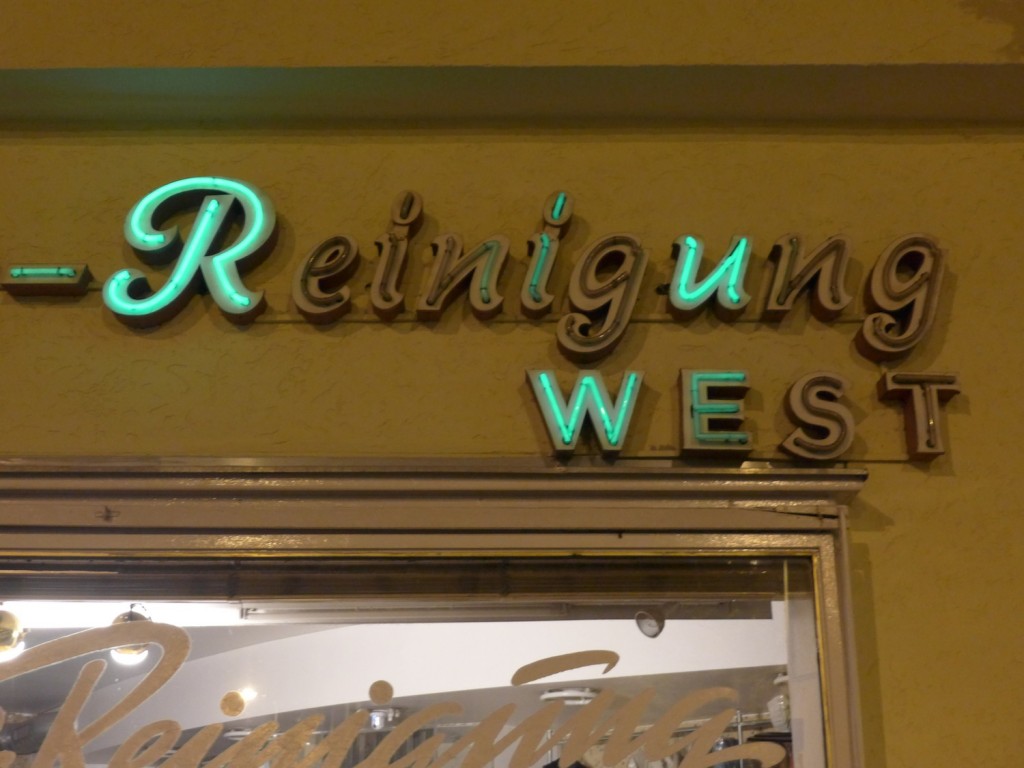 Of course, there is another Clash of Civilizations between Martin and certain members of the VDP who would like to remove what they consider a stain from their organization by throwing him out of the association. However, this Reinigung, or dry cleaning,  doesn’t seem to function properly, and Tesch stubbornly remains a member. He and his wines keep on  pointing out uncomfortable truths and making a big noise, at least in some markets.

PS please don’t imagine that because this posting went up just 15 hours after the last one that I can do this all the time. The rest of today, and most or all of every day this week has to be devoted to my book manuscript.