On the Riesling Road: Day 5 – UPDATED Dry Fear and Loathing on the Rhine for Theise & Co.? NOW including quotes form Jochen Dreissigacker 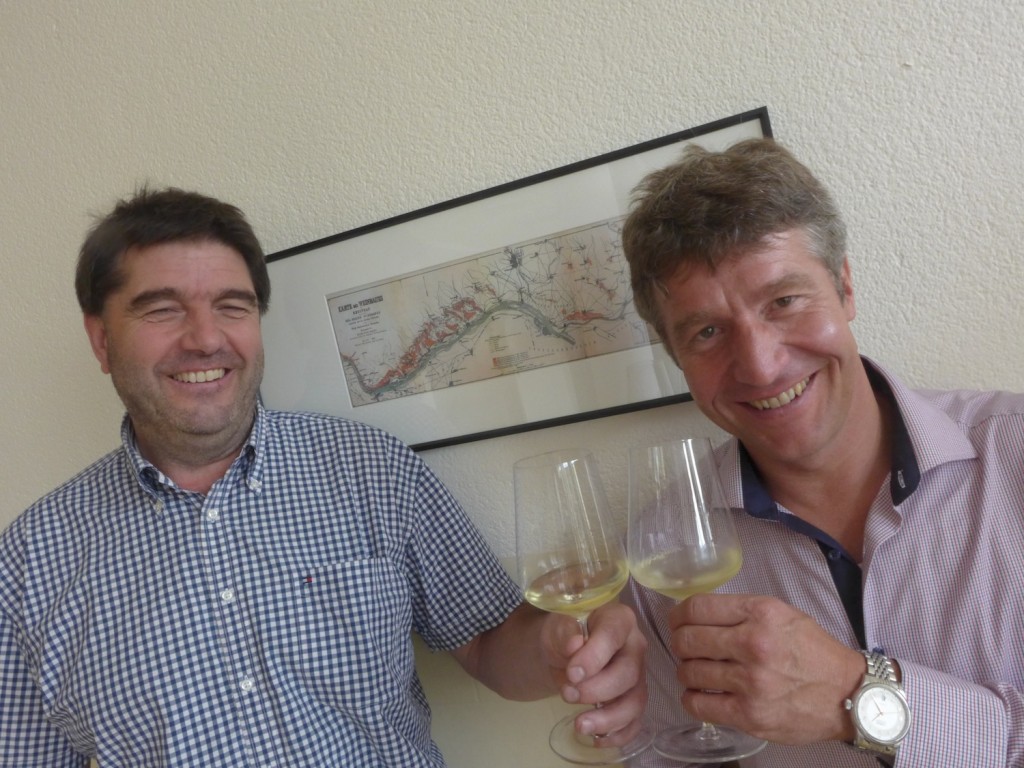 The last couple of days I was tasting, tasting, tasting like all the other journalists, experts, somms and geeks gathered on the Rhine to attend the various presentations the high-end dry wines of the 2012, a large portion of which go on sale in just four days (September 1st). The day before yesterday I bumped into Chris Miller of Spago Beverly Hills (see my coverage of the Riesling Road Trip below) came all the way from LA to attend the VDP producers associations “premiere” of the 2012 ‘Grosse Gewächse” (GGs) in Wiesbaden and he clearly felt that this effort was worthwhile. So did everyone who had a shorter drive, plane or train ride. But while we were all tasting, tasting, tasting and I, like everyone else, was trying to figure out which were the best wines and what the overall standard was (more on that in a moment) a storm burst over me as a result of the two posts below. Much of the thunder and lightning took the form of emails, some of which I was asked not to publicize, but there’s no way I can just let this whole thing go. Extreme as this might seem what is at stake is not only the international perception of German wines, but also the Germans themselves.

It all reminds me of a situation at a tasting of German wines in London where an older colleague of mine suddenly and loudly exclaimed, “Oh my God, they’ve all been trockenized!”  Everybody heard it and turned around to see what had happened. What she meant was that all the German wines she loved, which in her mind had been sweet at least since time of Noah (because that’s the way she remembered them) had suddenly been turned “trocken”, the German word for dry. Some of the wines were indeed a bit lean and sour, so some criticism was called for. However, for her there was no doubt that certain people – the German winegrowers standing on the other side of the table – had committed an odious crime and should be held responsible for it. Call the United Nations right now!

That was almost exactly 25 years ago and since then a lot has changed. However, Terry Theise, one of the leading importers of German wines to America was quoted in the New York Times of August 22nd 2013 as saying, “the omnipresence of dry wines within Germany is a dubious example of this country’s temptation to do things in large, implacable blocks.” That makes it sound as though German wines – particularly those which the Germans drink – are stuck in some terrible dry rut that was a mistake from the beginning, but has only become deeper the further they drove into it. This implies stupidity, blindness or a combination of both. Worse still, Terry Theise suggests that this is part of some fatal flaw in the German’s national character, of which this is merely the latest in a long series of examples. Only the most superficial knowledge of modern history is necessary to spot one such large, implacable block in German history, even though it was only 12 years long.

During all the email correspondence a bunch of other stuff came up which suggested this view of German wines and the Germans isn’t limited to Terry Theise, which makes it all the more important to offer an alternative view. Yesterday I visited a handful of specialists for dry Riesling in this part of the Rhine Valley: Carl Erhard and Gunther Künstler (pictured above) of the Franz Künstler winery in Hochhein/Rheingau, Jochen Dreissiacker (pictured below) of the Dreissigacker winery in Bechtheim, Klaus Peter Keller of the Keller winery in Flörsheim-Dalsheim and Philipp Wittmann of the Wittmann winery in Westhofen. Although Künstler is longer-established (he first made a splash 25 years ago), all are extremely ambitious and dynamic producers and the wines I tasted ranged from very good to mind-blowing. More importantly, each of these producers has his own distinctive style and the wines of each vineyard site had their own personalities. In short it was an exhausting, but inspiring day of tasting which gave me a wealth of material for columns and stories. However, I mention all of this only because it all stands in stark contrast to the tone of Theise & Co.

The problem for me with their attitude is that they talk and write as if “dry” German wines were some kind of large, implacable block, have always been that way and will ever remain so. I feel no hint of appreciation for the diversity of this micro-cosmos of wine that has been developing longer than I’ve been following it (about 30 years), becoming ever richer in color and tone as it did so. Such has been the improvement in quality that the best dry German wines now unquestionably amongst the world’s finest. However,  Theise & Co. insist on presenting “dry” as a stark alternative to “sweet”, even if they are at pains to make clear that their championing of the “sweet” underdog (as they see it) doesn’t mean that they believe the sweeter the wines are the better. That is really the only hint of nuance I get in their argument. I have the strong impression that they aren’t really interested in the achievements of winegrowers like those I visited yesterday, or at best grudgingly so. Instead, they project a dull and monolithic quality on this richness. For them the Rhine seems to be a place that inspires fear and loathing. 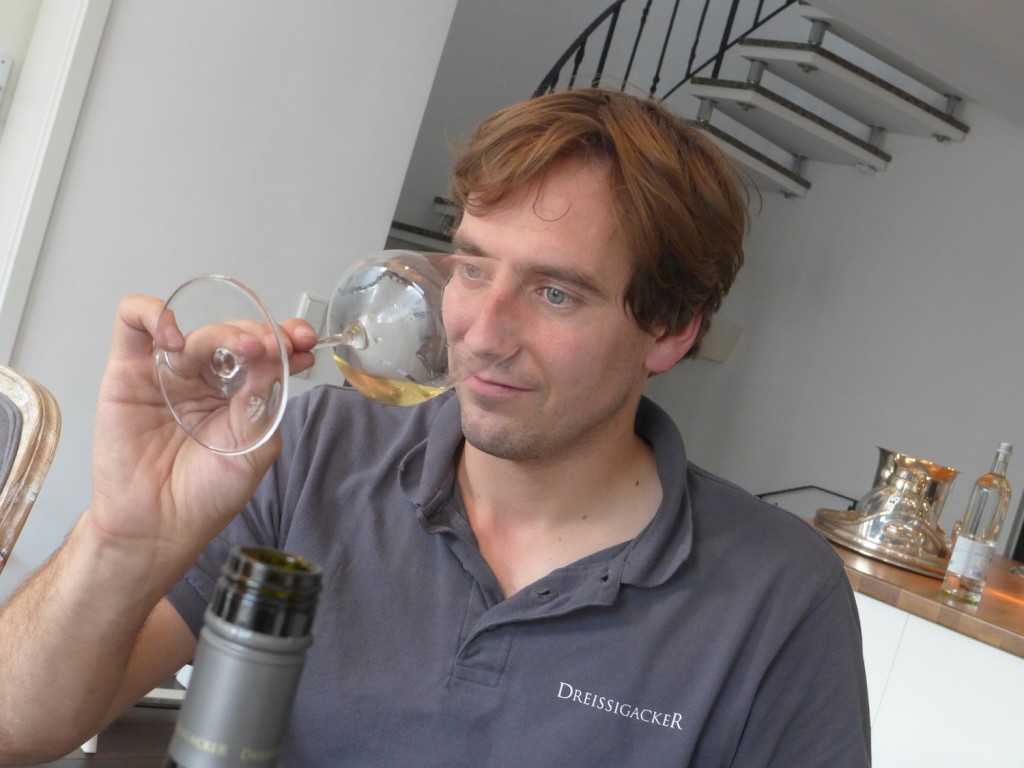 That is all in stark contrast to the attitude behind my work, which is all about embracing the enormous diversity of Riesling, German wine and wine in general. As I made clear in my posting on August 23rd the Germany I experience to day is far more open-minded and far less inclined to behave in large, implacable blocks than it was ten or twenty years ago. I enjoy the company of the “Flexi-Germans”, as Roger Cohen of the New York Times christened young Germany back in 2006 during the soccer World Cup, and it is a pleasure for me to drink the wines made by some of them. Many of them are dry, and wonderfully so. There are of course better and least good examples, just as there are everywhere that wine is made. That’s the reality I encounter here.

Jochen Dreissigacker had some important thoughts on this subject, which got lost in my hurry to post this story very early in the morning while on the road. When he asked him how he saw the situation he said, “they slammed the door that was open in from of them, then put a lock on it!” His tone and the past tense made it plain that he thought this had happened many years ago and that Theise & Co. have no intention of unlocking and reopening it. Personally, I’m all in favor of unlocking all the doors of perception  (to quote Aldous Huxley), regardless whether they were closed by someone else or I stupidly closed them myself). And about his own generation, the “Flexi-Germans”, also known as Generation Riesling, he said, “for us there’s only one question: does the wine tastes good or not!”

2 Responses to On the Riesling Road: Day 5 – UPDATED Dry Fear and Loathing on the Rhine for Theise & Co.? NOW including quotes form Jochen Dreissigacker