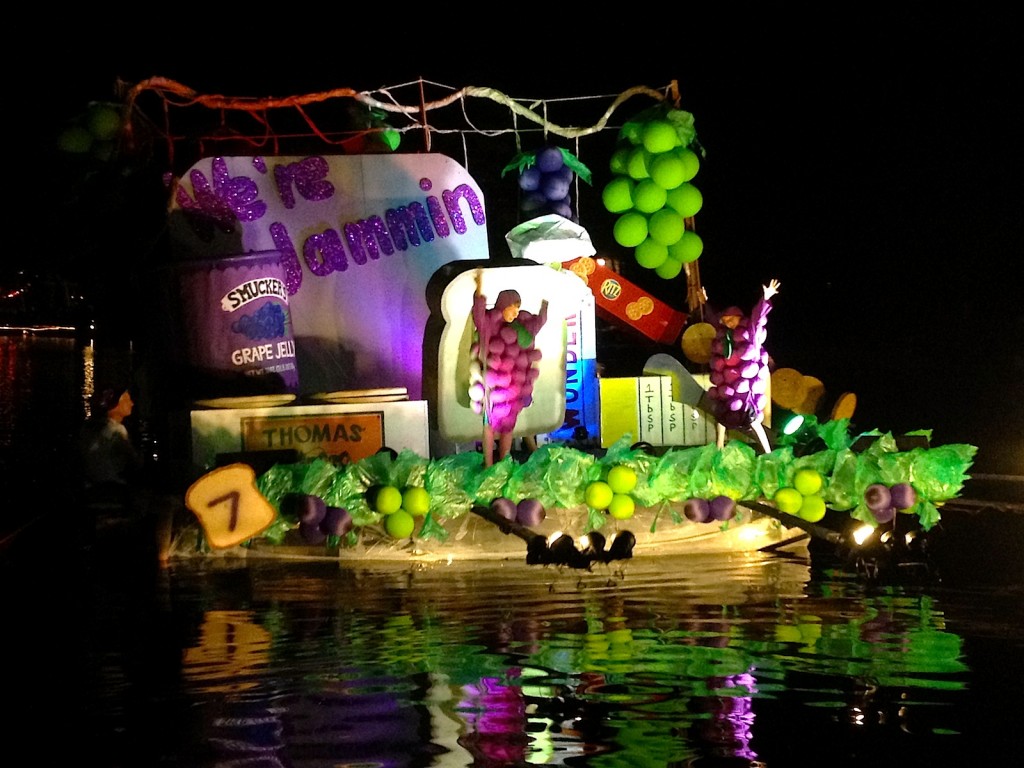 How could my New York Riesling Diary suddenly have gone from Day 1 back to Day 0 since the last posting? However  bizarre it might seem the above photo provides the complete explanation. It shows what I saw around 9:30pm yesterday evening when Float 7, entitled “We’re Jammin’ “, at the Medford Lakes Canoe Carnival passed the piece of lakeshore where I was sitting. I promise you that my jaw dropped a very long way!

This joyfully in-your-face piece of Americana was the most eye-popping of the 16 floats that made up the 83rd Anniversary of this mind-blowing event that’s as old as Walt Disney’s cartoons. “We’re Jammin’ ” float clearly draws part of its inspiration from Disney, but advertising imagery was obviously another bounteous source. However, it also documents America’s special relationship with the grape, which has as much to do with grape jelly (the best thing you can do with the Concord grape, in my opinion) as it does with wine. This is not the place to dig deep into the historical roots of that, rather to celebrate the fearless (of ridicule) yes-we-can feel-good spirit of Nutt n’ Butt Paddles who conceived and executed this oh so American piece of divine madness.

From this that you can tell that just a few days after my feet hit the New York Wine City (NYWC) sidewalk after the City of Riesling event in Traverse City my thirst for discovering America and uncovering its wine mysteries had driven me back on the road again. This time it was an invitation from Jackie and Barry Nobel who live just a couple of miles from Medford Lakes that provided the excuse for adventure. Many thanks to them for persuading me not only for being so hospitable, but also for persuading me to go along to the Canoe Carnival and not minding that I lovingly refer to their part of South New Jersey as Hokeyville. 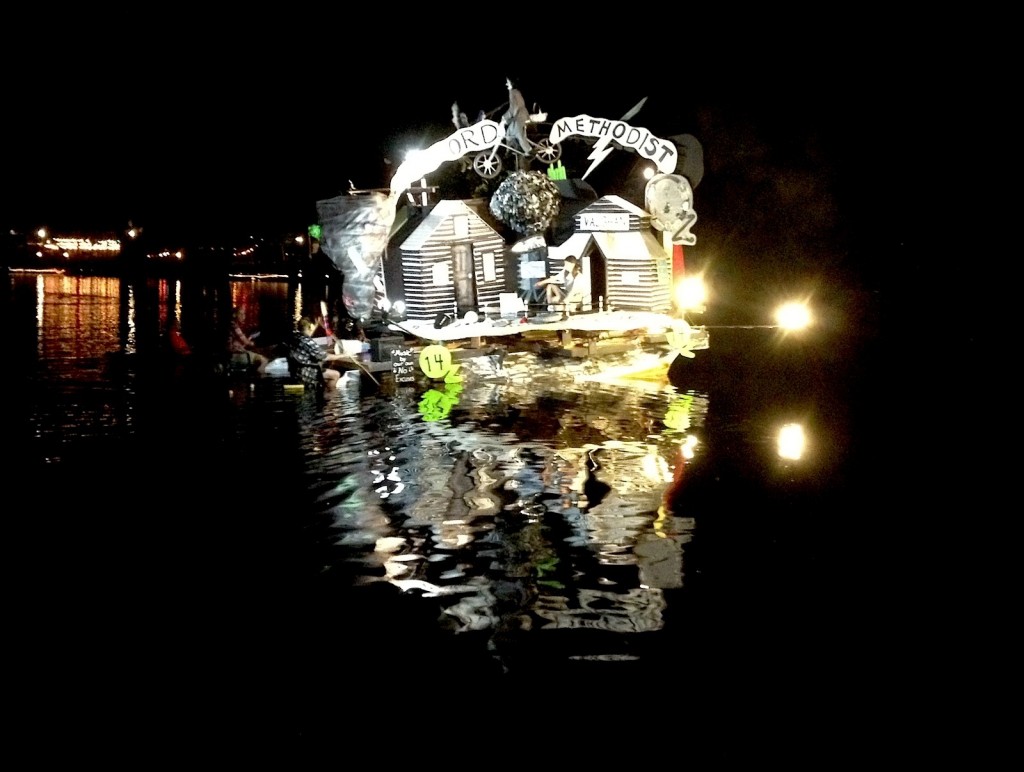 There’s no way that you can get a proper idea of the extraordinary spectacle of the Medford Lakes Canoe Carnival without seeing several more of the floats. For me the most amazing creation of the evening was Float 14, entitled “Oz – we’re not in Medford Lakes anymore” and presented by the Medford United Methodist Church (who else?). It told the entire story of Dorothy from the Wizard of Oz  as she is swept up by a tornado, then follows the yellow brick road over the rainbow on a two-sided revolving stage (!) 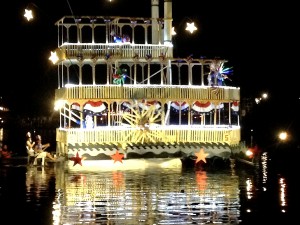 with a local girl – congrats on the excellent performance! – playing the role of Dorothy. I must point out that the revolving stage with lighting was all balanced on just two canoes, like the other spectacular floats pictured here. The technical ingenuity of all this – there was an SUV mounted on one float! – was just as impressive as the artistic creativity, and given the tiny budgets these people had compared to Hollywood’s millions all the more amazing. Just look at this riverboat, it’s three stories high! 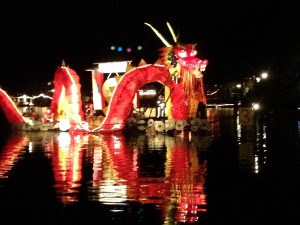 This utterly unselfconscious outpouring of high spirits was a complete contrast to the colorful and many-sided city of Philadelphia where I spent yesterday with Jackie and Barry. We managed to cram an awful lot of history, ancient and modern into the day and my thanks for that. I found all the very fascinating, even if I only saw the Liberty Bell only in passing through the car window. Plenty of people talk Philly down when they say that it’s “nice”,  “cute”, “little”, etc. The fact is that it has a stack of civic buildings, most notably the Museum of Art with those gigantic steps out the front which Rocky ran up in the movie, that are monumental. Then there’s the wealth of historical buildings, ranging from small (some pre-revolutionary) private houses up to the Liberty Hall, where the American Constitution was drawn up  and Congress met until the capital was moved to DC in 1800. All this make some high-profile European cities like Berlin (my official place of residence) look weak on history.

Many Americans have a serious chip on their shoulders about their country’s lack of history, and they frequently project a thousand years plus of history onto everything European as a matter of course. This inferiority complex just doesn’t line up with cities like Boston-Cambridge/MA, Charleston/SC, Savannah/GR, New Orleans/LO or Philly. And, of course, before white Europeans starting settling what is today the USA there was 20,000 plus years of Native American culture. If you think that this was all  “primitive”, then remember that the Native Americans weren’t interested in buying canoes or rowing boats from the Europeans, because their own canoes were technically superior (to give just one example). Sorry, I promise you that I haven’t developed a canoe obsession! 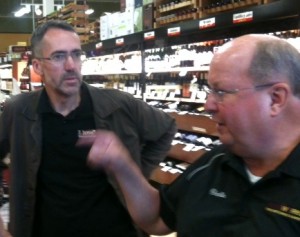 Of course, I was also on the look out for wine and in this part of New Jersey the place to go is definitely Wine Works in Marlton/NJ. Charlie Beatty (on the right) runs one of the best wine stores – it’s actually a wine warehouse with store-type shelves – in the whole of America. The range he stocks there is so awesome (I’m not throwing that word around in the typical American fashion) that  stringent self-control was needed in order not to run up a huge tab. The reason that I limited myself to a couple of bottles is that all the recent travel to promote my book BEST WHITE WINE ON EARTH – The Riesling Story has lead to a couple of gigantic credit card bills. By the way, Wine Works doesn’t sell it, and won’t do so, because they made the decision that with Barnes & Noble just across the road they weren’t going to do books, which is fine by me. 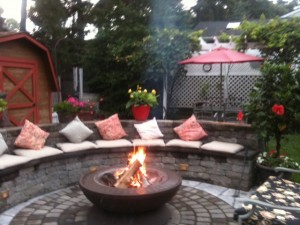 I have to admit that as adventurous as I am there was one thing in New Jersey that I didn’t try, which is a “S’More”. For those of you who – like me when I arrived in NJ – are still in the dark on this very American “delicacy” it consists of a Grahm cracker topped with marshmallows roasted in front of an open fire like Tracey’s pictured above, then topped with melted chocolate. I claim dispensation from the rigors of journalistic service on the grounds of an already over-full stomach and an aversion to sweet stuff late at night. Thanks for the offer and all the hospitality though!