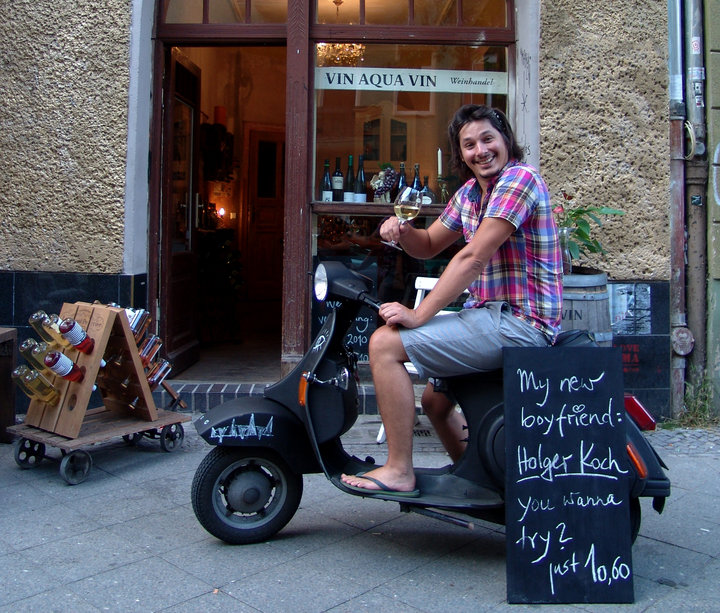 Jan Kreuzinger may only be 31, but he possesses just the right mix of arrogance and drinker’s belly to survive in the Berlin weinladen market. I stopped into his recently opened Neukölln shop, Vin Aqua Vin, on a warm Saturday this August, lured by the giant rough-hewn wood table that can be seen from the street, laden with wine and glasses, as if it were suggesting to potential customers the casual and rustic qualities of wine itself.

Kreuzinger truly believes that wine is no big deal and a very big deal at the same time. Born in Cologne and raised by a solidly middle-class family that encouraged their children to really enjoy food and wine, Jan moved to Berlin 7 years ago with stars in his eyes and very expensive knives in his knife-fold. He worked as a chef and consultant at Kirk Royal, taught cooking classes at Goldhahn und Sampson, and continues to organize small dinners at the Private Roof Club in Mitte. But, as many would-be Berlin chefs quickly come to realize, the potential for creating a culinary atmosphere that embodies the elegance of fine-dining with a price tag that suits most of Berlin’s residents, is actually really hard. Restaurants are usually owned by uptight assholes that want to preserve very old notions of class, and young chefs, like Kreuzinger, are constantly being told to adhere to the status quo.

So Kreuzinger changed tracks and began working full-time at die Weinerei, Berlin’s famous ‘honor-system’ wine-bar, where really good bottles are drunk thoughtlessly by Australian tourists itching to get as drunk as possible for as little as possible. It was there that Kreuzinger learned some very valuable lessons about wine and how to sell it to a younger demographic. Kreuzinger sees the distinction between what to invest in and what people will understand as an essential element of his trade. “You don’t want to convince people to drink something. You want to begin in agreement with them and allow them to experiment on their own.”

Kreuzinger understands that for most Berliners, especially young ones, the switch from beer to wine is experiment enough. But he purposefully stocks his shop with wines made by the next wave of German winemakers who are using grape varieties like Silvaner, Muscatel, and hybrids like Pinot-Riesling, pushing them toward weird and wonderful places hitherto unknown.

Kreuzinger understands that the labels themselves play a big role in helping younger clientele envision themselves as regular wine drinkers. In this respect, Fritz Müller‘s light and fruity sekt-like Muller Thurgau’s makes a lot of sense.  The bottles are screw capped, under 6 €, and sport bold jail-striped labels.

For bottles that don’t announce themselves in quite the same way, Kreuzinger offers hyperbolic endorsements–as the photo above suggests. Calling a winemaker like Holger Koch your boyfriend when you are clearly a young heterosexual man, is exactly the sort of antic to get people interested and in the door. Once they’re in, the wine speaks for itself.