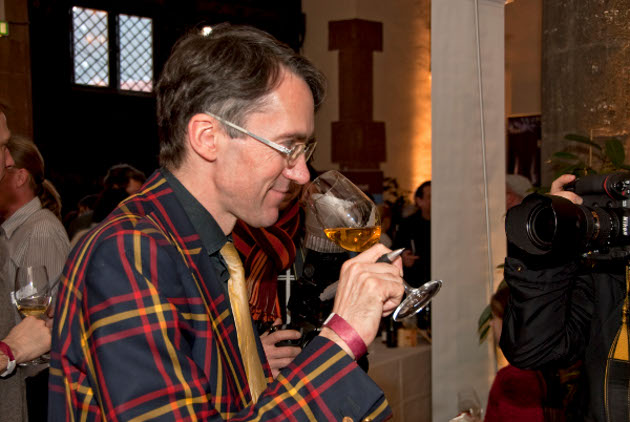 Some of you are no doubt wondering if I’m taking this funky new website seriously, or if the paucity of new texts is the result of an intensification of my anti-blogging instinct: NO TWITTER, NO FACEBOOK, NO BULLSHIT ! +++ The fact is I’ve been incredibly busy with a major project that I’ve been keeping under wraps, but now now word has spread in the wine scene and so many employees of German Railways (DB) know there’s no point in waitting until all the contracts are signed before revealing everything +++ Since late last year I’ve been planning a TV series for Bavarian Broadcasting (BR) called WEINWUNDER DEUTSCHLAND, or Wine Wonder Germany +++ The idea came from Prof. Dr. Thomas Gruber, Director General of the Station, who seems to have been inspired by a text on wine and the media I put on this site in spring 2009 +++ My argument was so unconventional I didn’t expect anybody to follow me, but Prof. Gruber immediately grasped my observation that the German tendency to absolutism has condemned wine on TV to either being the exposure of a scandal or rosy-glow-Tuscany +++ He put me in touch with producer Ernst Geyer with whom I hit it off with straight away, though we’re totally different personalities with widely diverging backgrounds, and our discussions established the basis for a completely different approach to wine in German TV +++ Then Geyer introduced me to director Alexander Saran with whom I wrote the first scripts in Late March and shot the first material on the 13. April here in Berlin +++ That was at the „Secret Gig“ of Nahe Riesling-Rocker Dr. Martin Tesch and Hanan Rubinstein (whose CD „The Year I Lived“ is just out, for more info see www.hananonline.com) at Gibson Guitars’ German HQ +++ We were moving at warp-speed, but on our first full day of shooting in Geisenheim/Rheingau we almost crash landed +++ After less than an hour our sound man was rushed to hosiptal with catastrophic backpain and a replacement called for +++ Then one man short we had to shoot some of the most complex shots of the entire series, but somehow it all worked out +++ Since sound man Peter Wuchterl arrived from Berlin the next morning he, cameraman Sorin Dragoi, assistant „Flo“ Bschorr, Saran and I have been a pretty solid team +++ Except during our last shooting tour when a strudel of problems made me feel I was turning into Klaus Kinski and Saran began looking like Werner Herzog to me, but we pulled ourselves together and got our ship back on course +++ Flo recently put his finger on the other problem I’ve had on the road: the persistent feeling that we’re only filming the B-version of what would be possible +++ then the other day we sat down in a room of Hotel Mitte in Rheinbach near Bonn and saw rough-cut versions of three shows and all agreed they were A-versions +++ A book to the series from Tre Torri Verlag will appear in the stores several weeks before the first show goes out at 16:30 on Saturday, 25. December in BR3 +++ Merry winey Christmas!