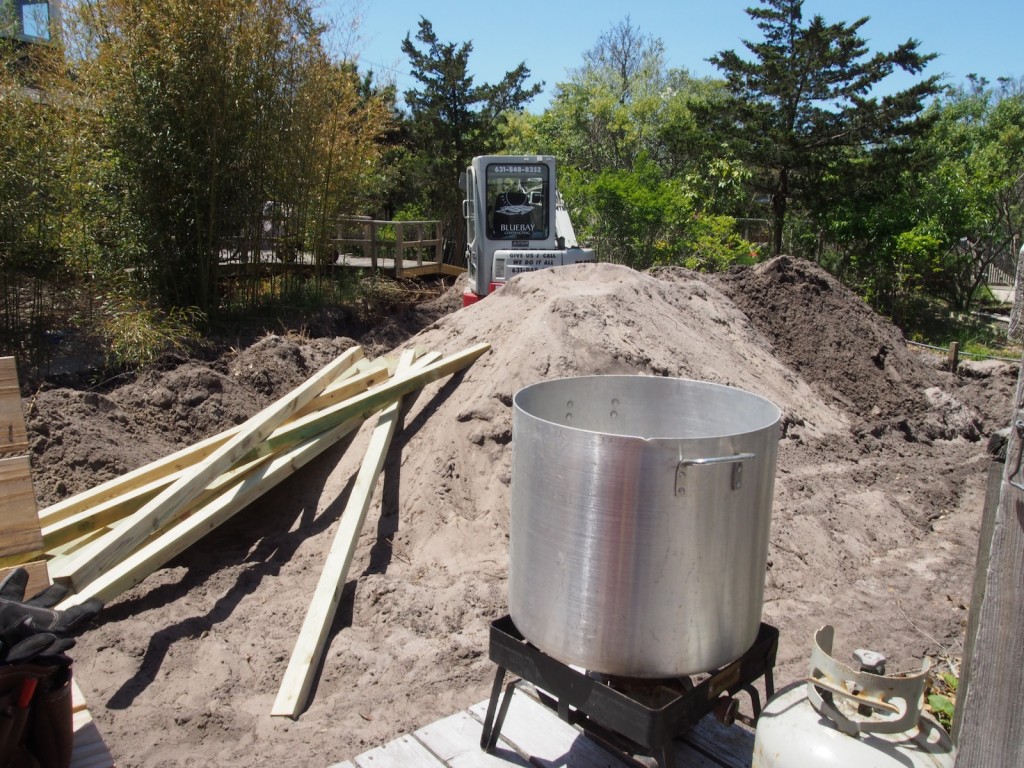 I spent an oddly wonderful weekend on the construction site on Fire Island, New York pictured above. I’d not only never been to Fire Island, a long sandbar off the southern coast of Long Island before, in fact, I didn’t know where to look for it on the map, much less did I realize what a “special” place this is. Although it’s so close to the Hamptons where the lawns are wide and consumption is expansively conspicuous, Fire Island is packed tight with (mostly wooden) cottages and consumption is discretely inconspicuous. This is a delightfully leafy retreat with some of the most beautiful gardens I’ve seen in the US, and some of the highest grocery and wine prices too.

Maybe that sounds a bit griping, but I promise you I felt very much at home in what struck me as the Carmel of New York State. I just wish I could have done more to help my friends Jenn and Don’s with their construction project, but it was very heavy work to which my upper body musculature is not well suited. Instead, I helped cook, washed up dishes, cleaned floors, went to the store for missing ingredients and helped manage the trash. I also had a good look around the island on foot and bicycle. When I mentally blotted out the row of immediately beachside houses on wooden stilts (out of frame, below picture right), then the beach reminded me very much of Margaret River in Western Australia. There too a strip of sand that looks as straight as a laser beam extends as far as the eye can see in both directions and in front of it is water as far as the eye can see; in Margaret River it’s the Indian Ocean, on Fire Island it’s the Atlantic. 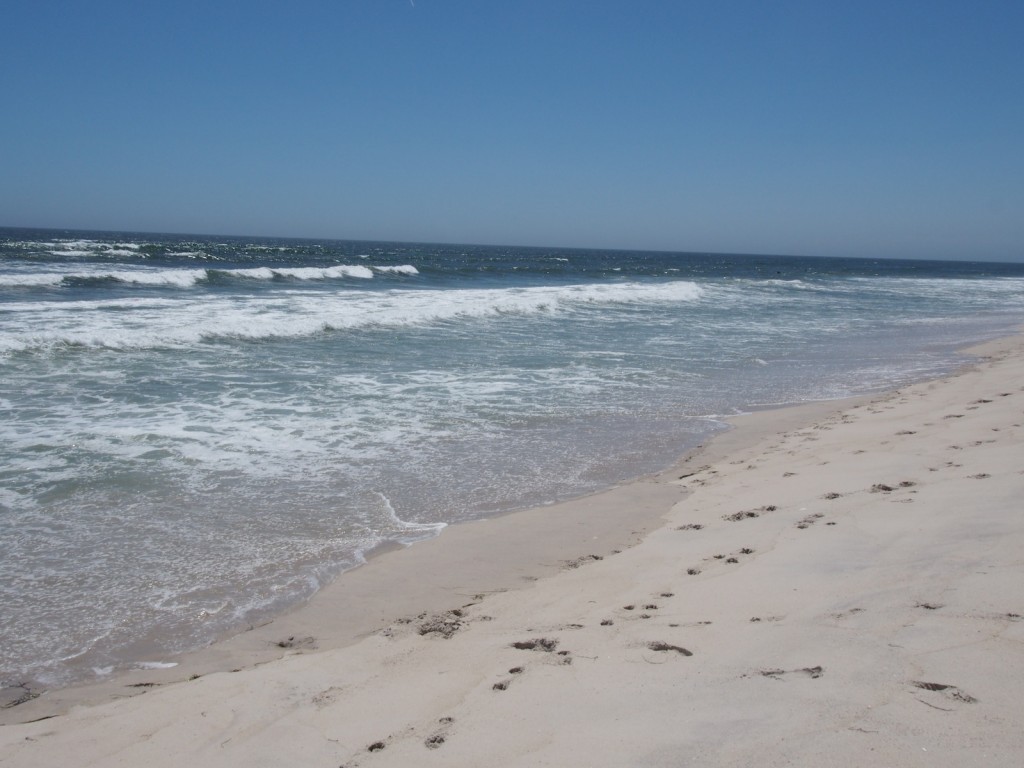 Of course, nothing in this world is as straight or as logical as it seems at first glance. During the last week I had tweeted a bunch of stuff about journalistic integrity, and while I was doing all those chores for Jenn and Don, and they were doing all that heavy lifting, I got to doing some long slow thinking about all those things and the stuff I’d written about them. The first thing that struck me is how there’s a fine line between having positive journalistic principals and becoming obsessively moralistic about those same things. Where does the point lie where the courageous adherence to journalistic independence, honesty about your methods and results, and the strict avoidance of undeclared agendas  tip over into rigidly demanding the adherence to rules instead of cultivating inner strength and a self-righteous sense of one’s own integrity that starts denigrating others who work well in a different way to yourself? There certainly is a place where one ends and the other begins, and I may have have stepped over it at some point. 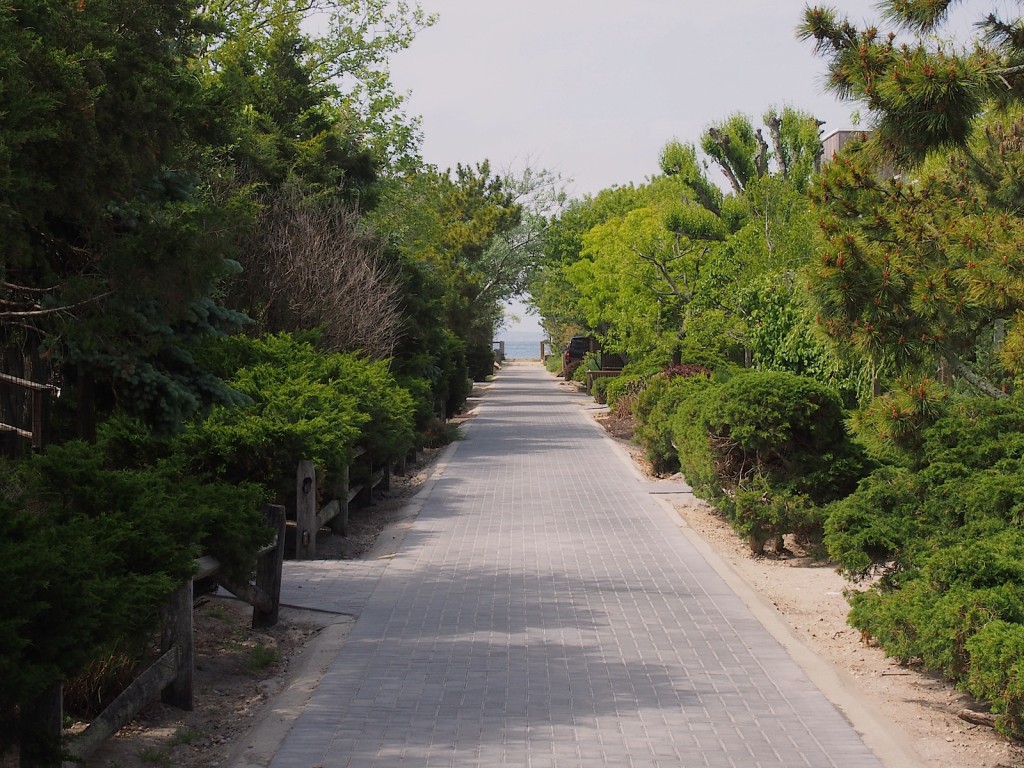 Was it the calm of the car-less (except for police and fire dept.) island, that is as far removed from the hustle of NYC as you can imagine that lead my mind ever onward into this mental territory, or was it just the simple nature of the tasks that I was doing that gave my mind the space to wander? Maybe it was both, but regardless of the explanation, I feel the results are worth sharing, because this is talked about so little about. Firstly, I always admired the commitment of certain American publications to journalistic independence – the New York Times immediately comes to mind, but my practical introduction to it was at the Wine Spectator for which I was a freelancer from ’86 thru ’96 – and this is still an ideal for me. However, since 9/11 not one newspaper, magazine or website that employed me with any regularity was committed to covering the expenses of my research. They all expected me to solve that problem by myself, and it wasn’t very long until that situation was something also I took for granted. In Germany, where the majority of my journalistic work is still published, this was situation was and is considered normal. Very few freelance colleagues enjoy real support from their employers with the burden of their legitimate expenses, and this influences the way they work, can afford to work.

With rare exceptions, for 15 years I paid them myself as far as I could, and those costs were often substantial. For example, a month in Japan back in 2007 cost me around $10,000. In fall 2014 I was in Israel for two weeks, a trip that cost me about $5,000. In both instances, I accepted no kind of financial assistance from any wine producer or any regional/national promotion board. The modest amount of hospitality I accepted from wine producers never extended to a room for the night or a lavish meal. (To be frank about my methods, although I rarely go on all-expenses paid press trips, I sometimes accepted hospitality from producers on the basis that I would return this when they come to one of my home cities). The vital difference between these two examples, is that back in 2007 I had a publisher who paid generous advances for books packed with daring reporting. Since the financial crash advances of that kind for this kind of material have all but disappeared, so the Israel trip was much more difficult for me to afford than that to Japan although only half the cost in absolute terms.

I write all this not to win your sympathy, but to point out the realities of much contemporary journalism. I am lucky to often be better paid than many of my colleagues, and if some of them accept more assistance from wine producers or promotional bodies, than I ever consider acceptable, this often has something to do with them having a lower income than I do. I am not handing out some kind of blanket excuse for freeloading to all wine journalists, much less all journalists, I’m  just saying that this job is rarely well paid, and when it is badly paid this inevitably exerts serious pressure on those affected. 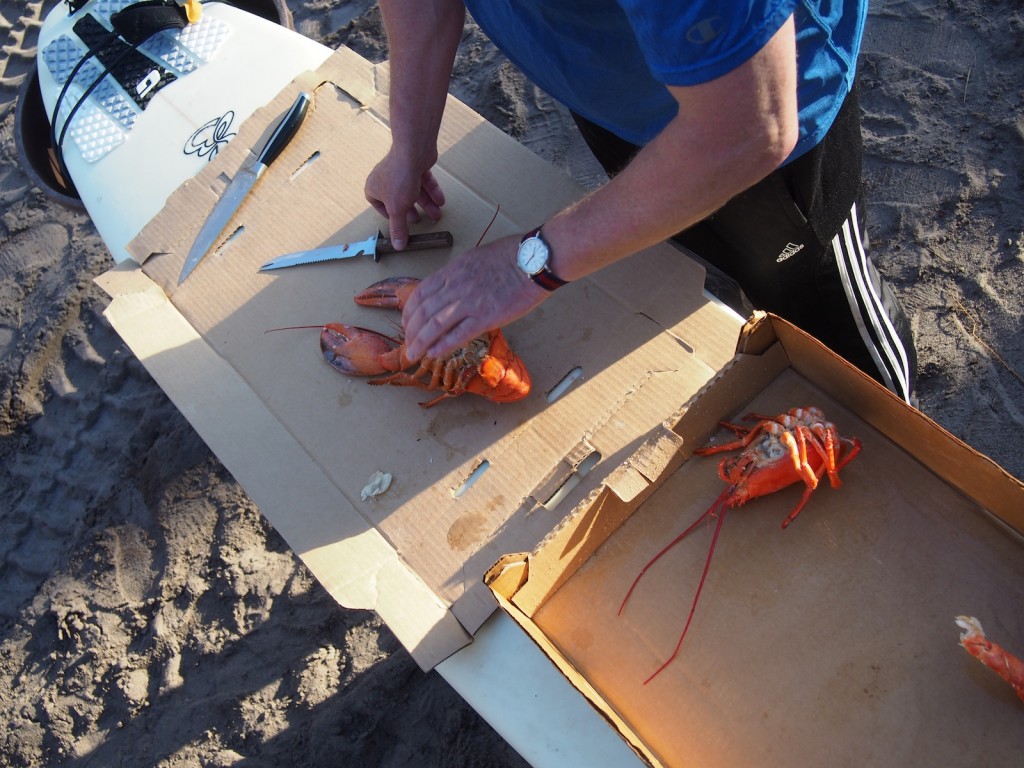 Now, it’s time for full disclosure: on Fire Island, I accepted a bed for the night from a wonderful little old (sorry, I mean this in the nicest possible way!) lady from Brooklyn called Oona who spends most of the summer out there and knows the place better than anyone else I encountered. It was a great pleasure listening to her stories told with a broad Irish accent. All of this had a lot to do with the high spirits at the lobster fest Jenn and Don served us on Saturday night. As you can see in the above picture, Don cut up the lobsters on his surf board at the edge of the deck where we ate. Oona drank an impressive amount of whisky and was in top form; I was on wine of  non-fancy kinds and forgot a lot of the minor troubles I too often let bother me.

During the night in one of Oona’s guest rooms I woke and lay there listening to the waves of the Atlantic on the nearby beach. All of the stuff I’d been thinking about during the day went through my mind again, and I came to the conclusion that journalists who were lucky enough to spend their entire working lives employed by publications that pick up their expenses must have a hard job understanding what the life of the freelancer employed without expenses (the juggling act between avoiding bankruptcy and maintaining some kind of journalistic independence), just as those freelancers must find it tough comprehending what journalism is like with the safety net of paid expenses and the strict codes of conduct that comes with that. The hard fact of this journalistic age, is that the latter situation is fast becoming an island of old-style professionalism in a sea of badly-paid advertorial and internet (dis)-information. That is something readers and journalists alike need to face up to, before the endangered species called the “free press” becomes extinct. We get the journalism we are willing to pay for and deserve, also the wine journalism we are willing to pay for and deserve.

The train I wanted to take back to NYC Sunday afternoon wasn’t running because of some technical problems, so I was forced to take a shuttle bus, which got caught in the massive thunderstorm that afternoon and evening, and the resulting gridlock on the Upper East Side. I don’t believe in omens, but it was difficult and slow – plenty of “down time” – getting back to my desk, my deadlines and the expenses I shoulder myself.

PS Many thanks Jenn, Don and Oona for your hospitality!