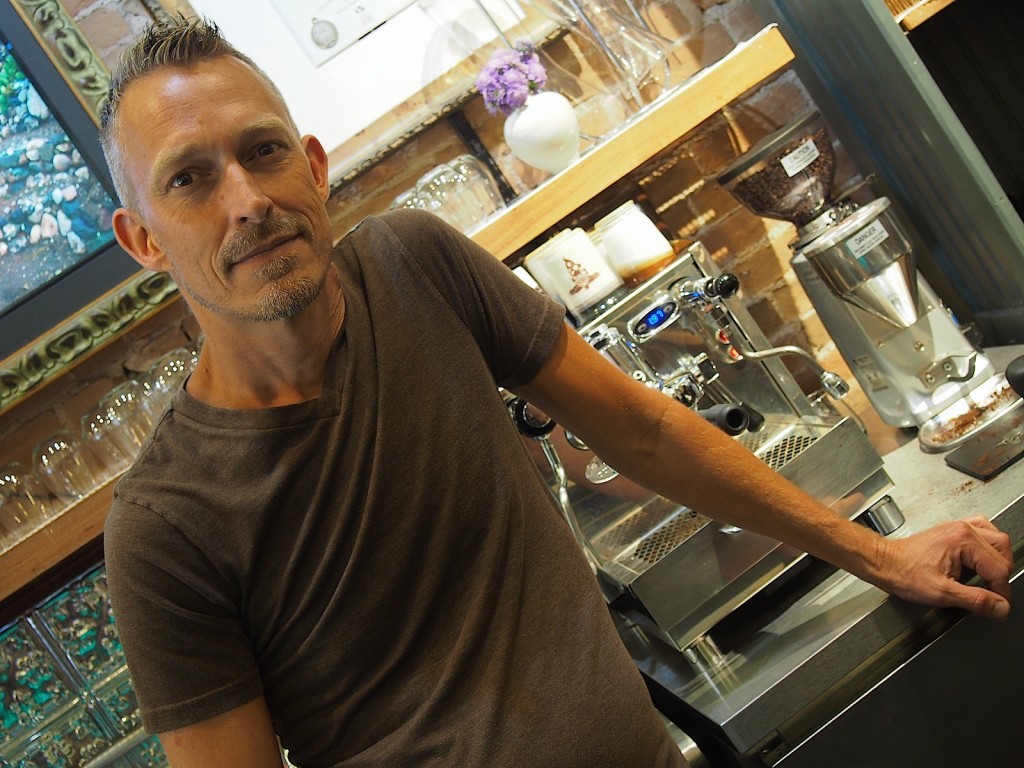 Yes, I know, this is supposed to be a story about the Singer-Winemaker Maynard James Keenan, the wines he’s making in Arizona and the work he’s doing to move that state’s embryonic wine industry forward, and, of course the above photograph is of someone completely different. However, this isn’t just any old coffee guy, it’s Alan Bur Johnson, “Barista and Wine Slinger” in the tasting room of Caduceus Cellars in Jerome, Arizona the public address and retail outlet of Keenan’s wine operation. He demands and commands this space by virtue of the amazing coffee he prepared for me and my companions yesterday afternoon after our arrival. I promise you that I am not the wine critic for whom every bottle is either “awesome” or “disgusting”. At least on a good day, I am Mr. Nuance, and on top form I am Prof. Analyze. So, I mean it when I say that this really was the most delicious cup of coffee I’ve had in a long time, and as evidence to support my case that the Caduceus Tasting Room at 158 Main Street, Jerome is one of the best cafés in America I present this tantalizing photograph. 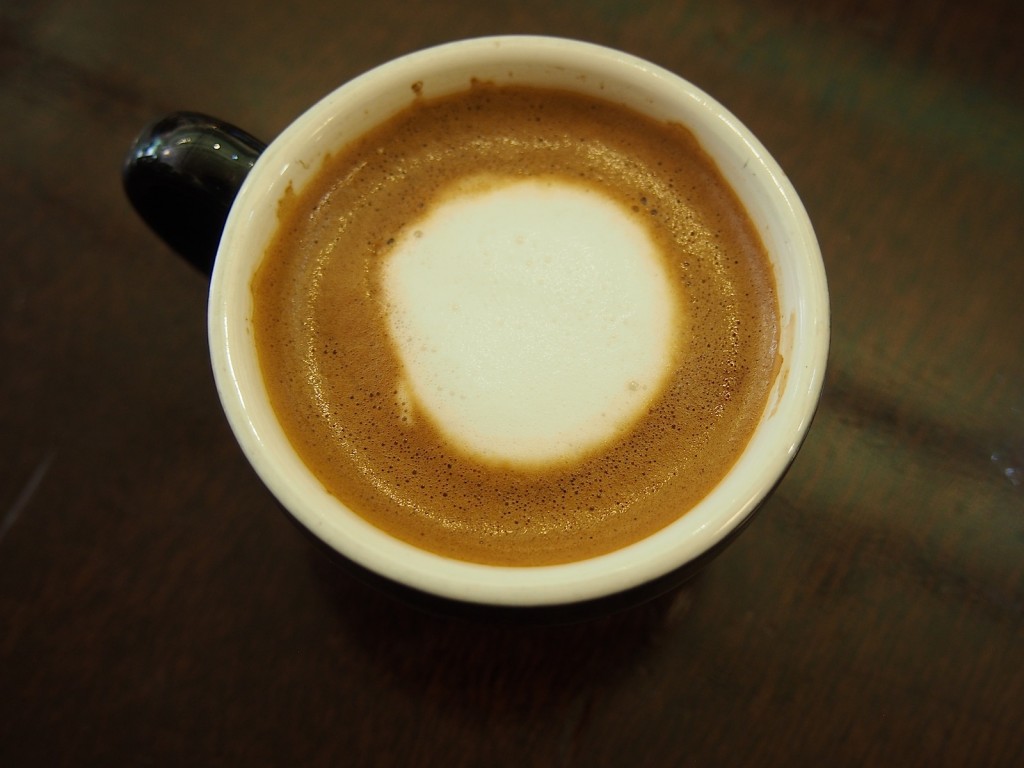 Have, I lost the thread of the story? No, I don’t think so, because while I was drinking that coffee Brian Sullivan, the Tasting Room Manager told me that he well remembers the first time in the early 1990s when Keenan came into the café he than ran in Jerome. He said that the availability of really good coffee might have been a major factor in the Singer-Winemaker’s decision to move here in (I think) 1995, rather than somewhere else in the Southwest. And I promise you that this was not a joke Brian was making, because Keenan is as fanatical about coffee as he is about wine!

Yesterday Kennan was on the road back to Jerome from a distant city where he had important business, so we were “on our own”, which actually means in the hands of the Caduceus Cellars vineyard manager Chris Thurner. I’m saving his story for when I write about the vineyards he tends as if they were gardens. I mention him them now, because I am staying in one of those vineyards during my time here in the north of Arizona, and exactly where I’m sleeping leads me to the trivial topic that has elbowed it’s way to the front of the queue in a rude manner. Please bear with me just a moment! 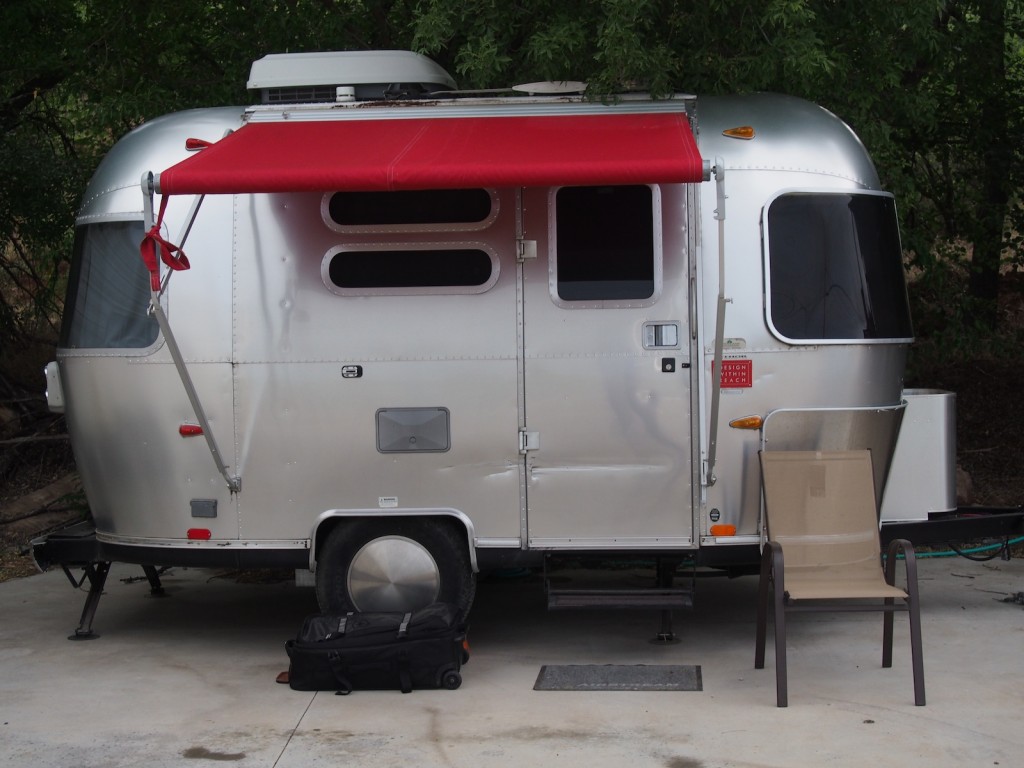 I’m talking about the airstream trailer pictured above in which I spent my first night here in the Verde Valley. Ever since I first saw ads for the airstream in American magazines (I think it was National Geographic) from the early 1960s I wanted to sleep in one of these things that I associate so much with the Space Race, John F. Kennedy’s glowing optimism and Marilyn Monroe’s voluptuous curves. All of this came back to me when I saw a small airstream in one of the Puscifer music videos staring Keenan, and when I first visited Jerome in November 2014 I was delighted to see it parked outside his house; “it’s real!” I’m now pleased to report that I slept extremely well in it, and that’s where I’m writing this blog posting. The door is open, the heavy electrical rainstorm of yesterday evening has passed, the early morning sun is streaming in, I can hear the water in the stream that runs through the property, the birds are singing and I’m drinking a cup of tea. More importantly, I feel confident that this will be an exciting day with Keenan, during which I will learn more about my host and his Great Arizona wine quest. Watch this space and while you are doing so listen to Puscifer’s Breathe, a song about needs and expectations: