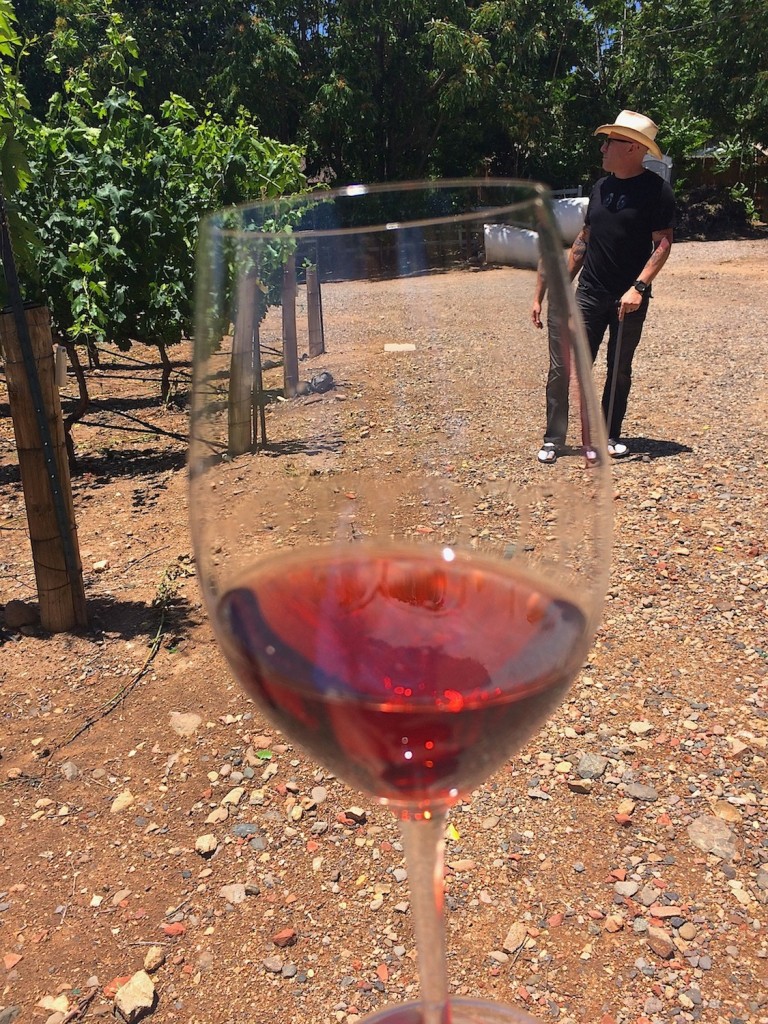 By 10:30am yesterday, the only hints of the huge electrical storm of the previous evening were a few wisps of white and grey cloud slowly dissolving into the azure above the Verde Valley.  That’s when the Maynard James Keenan and his vineyard manager Chris Thurner picked me up for a tour of the vineyards owned by Singer-Winermaker in Northern Arizona began. It ended up filling almost the entire day and wiped me out. What made the day so demanding was the thoroughness with which Keenan and Thurner presented the five vineyard sites, and how we tasted wines wines harvested in each during that tour.

The only problem with this situation, is that it makes me feel like a photographer challenged to capture a panoramic landscape of the kind that Arizona is so rich in into a conventional 3:4 format photograph. The only way to get close to that is to pull the zoom lens all the way out, so that it take in the widest possible field of view, then to select a section of the panorama that gives the best idea of the whole. How can I cram into a regular length blog posting all that I experienced and was said without dumbing it down? You see, over-simplification to the point of falsification is the commonest and worst mistakes of wine journalists, it isn’t an option for me. So I’m pulling my storytelling zoom lens out as far as it will go, and selecting moments that I hope give you a feeling for the whole ball of wax.

Let me start by pointing out that the photo above shows Keenan in his Merkin East vineyard site where the Caduceus Cellars Marzo red wine and rosé grow. It takes just one glance for it to demolish one of the commonest misnomers about wine growing in Arizona. This vast state is not a uniformly barren desert dotted with cacti, where the wine grape is destined to struggle hopelessly and ultimately to fail. Although barren reddish cliffs tower over the vines at Marzo if you look at the vines of the Tuscan Sangiovese grape variety (pictured below) instead of those rock faces, then you can immediately see why the Spanish christened this the Verde, or Green Valley. 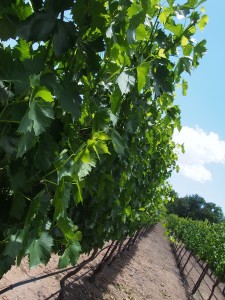 Now we need to backtrack an hour to the more rocky and arid looking Elephante vineyard on a hilltop with gentle slopes overlooking the valley, which was first stop on the tour. In a few years will be the major source of grapes for Keenan’s Caduceus Cellars and Merkin Vineyards here in the north of the state, so it deserved particular attention. As we arrived at Elephante Keenan listed the major obstacles to success with wine growing in Arizona in order of importance beginning with the paradoxical Problem Numero Uno, “Frost kill in winter and frost damage to the young vine shoots in spring…we also get monsoons, strong winds and dust devils.”

Then he passed the baton to Thurner (pictured below) for an explanation of how they’re trying to deal with this slew of problems, and before he did so Thurner added a couple more to that list, for example, too much potassium in the soil, which can result in flabby wines lacking in freshness. However, Thurner has a calm confidence in his power of creative deduction, and with good reason. In just a couple of years he’s figured out a bunch of strategies for tending the Elephante vines that look like  partial or complete solutions to those problems. The proof of this is that except where frost killed them in winter, the young vines at Elephante looked like they’d made a good start in life. I can’t wait to taste the wines made from these grapes. 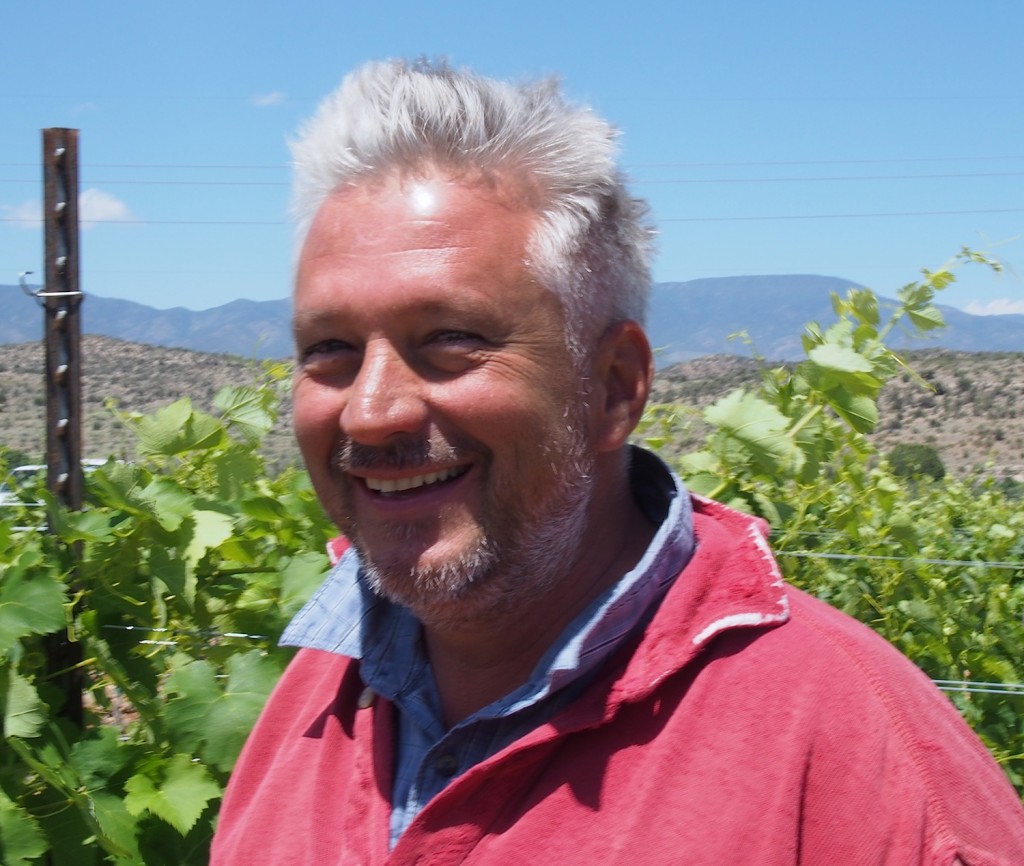 Although he professes to have little idea about vineyards, Keenan’s also had a couple of good ideas. “He’s so smart!” said Thurner, “He came up with the idea of funneling the rocks on the surface of the soil under the rows of vines where they can work as reservoirs for daytime heat during the cold nights.” “I’m so smart I can’t stand next to myself!” Keenan retorted ironically, hopping awkwardly aside and adding, “I only came up with that idea after spending a lot of money removing rocks from this vineyard!”

Wine growing maybe a science, but it isn’t rocket science, and you can never be sure that you’ve found the right solution to a problem, particularly in a situation like that in Arizona where there isn’t the experience of earlier generations of winegrowers to draw upon. Prohibition killed off the Arizona wine industry on January 1st 1915 when it was introduced in the young state (founded 1912).

Keenan hopped awkwardly, because he had major hip surgery on Monday, is currently walking with a stick (he will continue to do so for several more weeks), and has to wear support socks that give his feet a seriously odd appearance (see the photo below, and note the rocky soil of the Elephante Vineyard under his feet!) The day must have been far more of a challenge for him than it was for me, but he didn’t complain even when, quite late in the evening, he had to retreat to bed. That’s just the kind of determination I’ve come to expect from him. 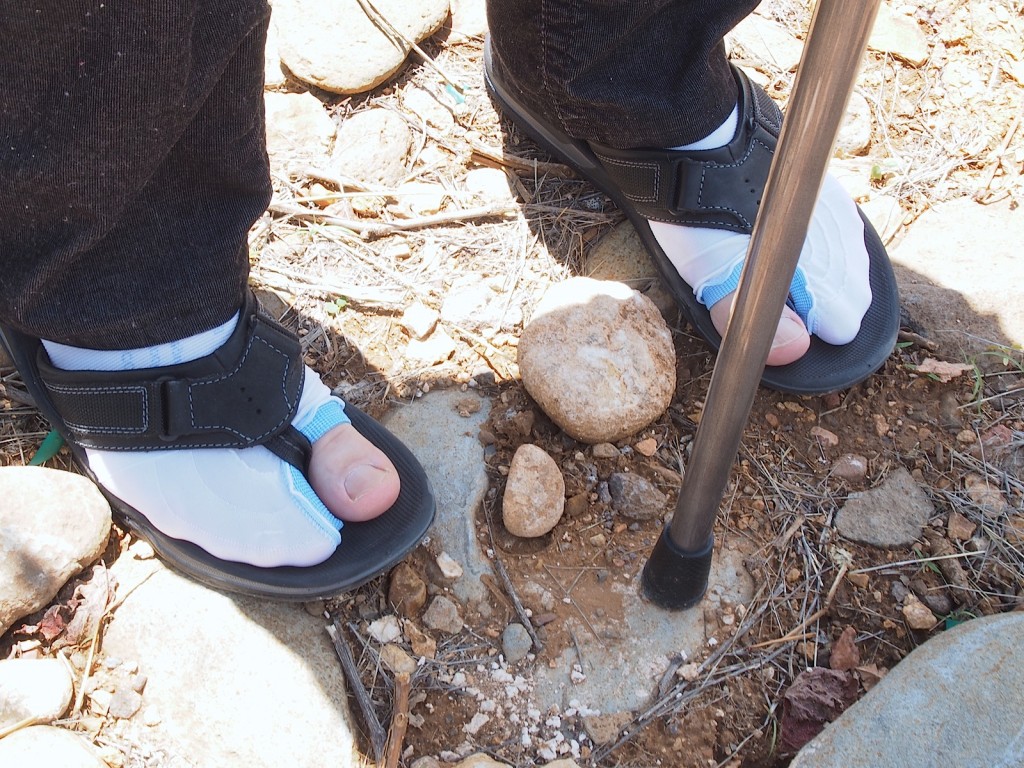 The problem with the monsoon in Arizona – I’ve already experienced how rain here can be on a biblical scale, but that wasn’t the actual monsoon – is that this landscape, including the vineyards, can then flip over almost instantaneously from desert to jungle. As Keenan observed, “Every seed in this soil has evolved so that when a few drops of rain hit the soil it shoots up…like six feet!” Those are the kind of killer weeds no crop shakes off a confrontation with, but that applies particularly to the sensitive grape vine. And at the 30 acre Elephante vineyard Thurner cultivates 15 different grape varieties, each of which reacts differently to every change in conditions, therefore requiring individual care. That’s the demanding everyday task for this Master Gardener of the Wine Grape.

Last stop on the vineyard tour was the small Judith vineyard below the Bunker, as Keenan calls the complex that is both his home and houses the winemaking facility for Caduceus Cellars. The first time I saw this extreme terraced vineyard (pictured below), perching on a precipitous hillside on the edge of Jerome in November 2014 I thought, if this location doesn’t give great wines at some point, then I’m a complete idiot. However, turning the potential of a special vineyard like this into wines that blow people’s minds is a very major challenge.

As impressive as some of the first wines from the Judith vineyard were (the first vintage was 2007), they left wide open the question whether Keenan, Thurner and team could really crack that challenge. The fact that during the last few years all the vines growing on Judith’s terraces had to be pulled out and the vineyard planted a second time, because the original vines were attacked by the deadly Pierce’s disease, inevitably cast even greater doubt over the feasibility of this undertaking, making it seem way more daring, risky, and yes, downright crazy. I therefor expected it to take another 5-10 years to get a conclusive answer to that question. 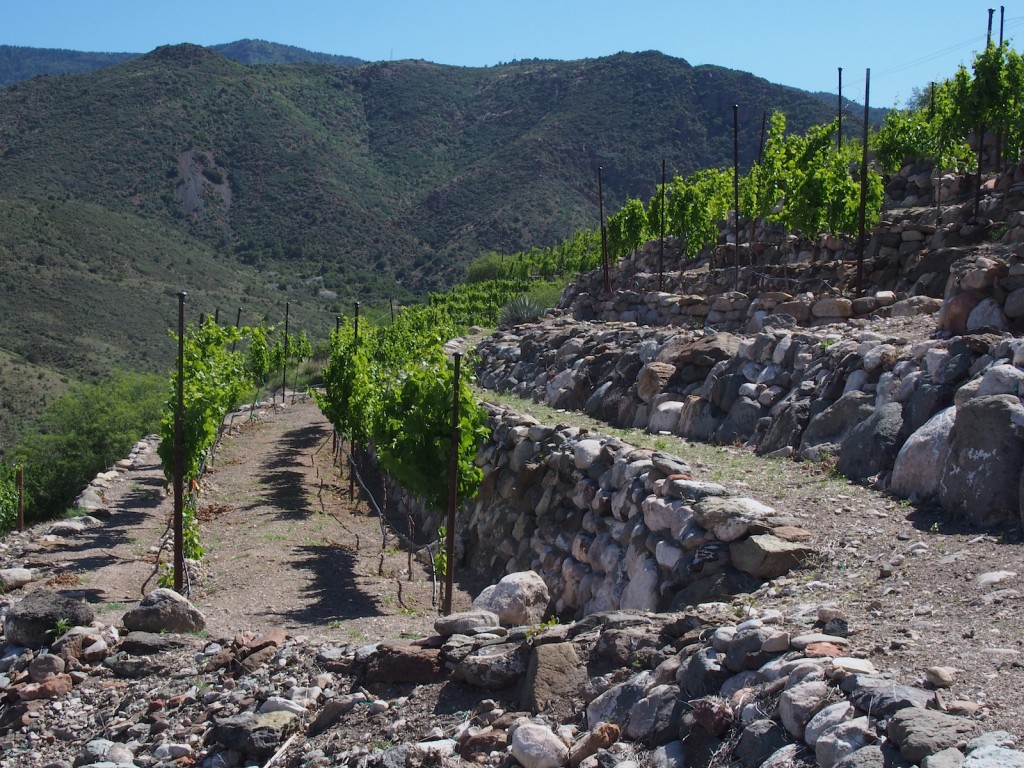 Then, suddenly and completely unexpectedly, at the end of yesterday evening after a simple but delicious pasta dinner in the octagonal living room of Keenan’s house that answer gently flowed into my wine glass. From the moment that I first sniffed the 2013 Judith red made exclusively from the Tempranillo grape the delightful chill of discovery that crept over my whole body told me, that the Singer-Winemaker and his team had made a unique wine and it had me in its erotic grip. It combined the darkness of black olives with the intense perfume of the wild herbs on the hillsides around Jerome, and the freshness of the early morning air below Mingus Mountain. Delicious already, I feel sure that it has decades of life ahead of it, and I hope to report on it to you again many times. This all has a soundtrack and it is Puscifer’s gentle anthem to the power of teamwork, The Humbling River:

Thanks to Erika Smatana for the opening photograph.