Or are the rumors that they’ve gone clear over the edge true? 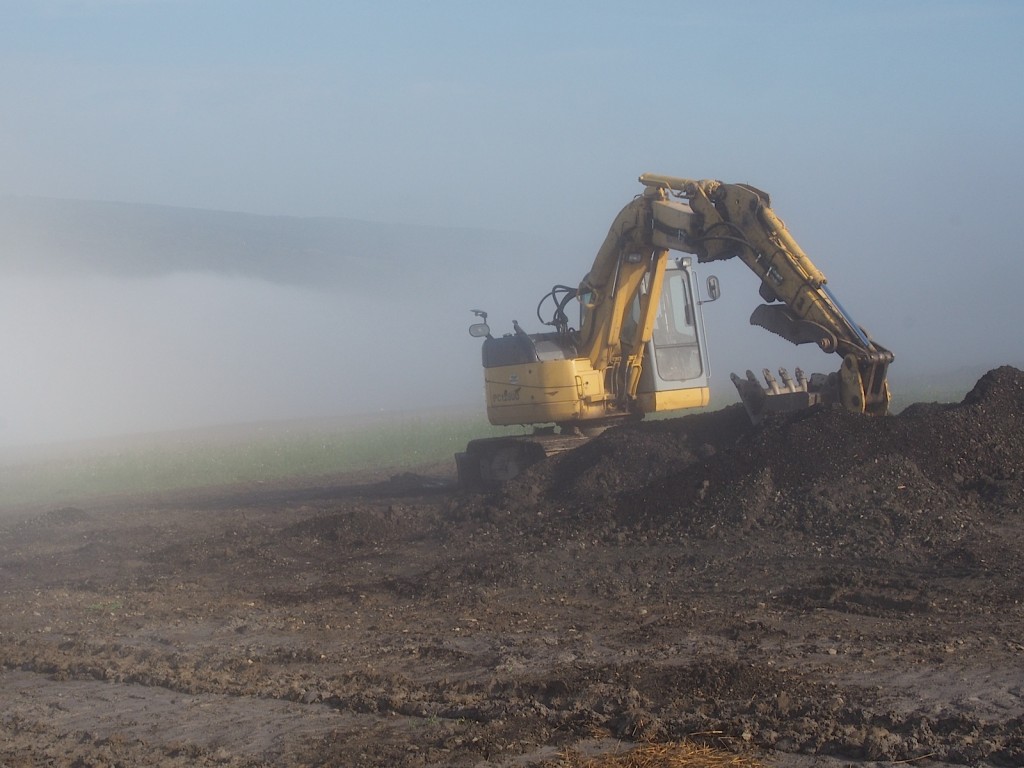 This is the sight that greeted me at 8am this morning at the beginning of my tour of the new vineyard that California-based flying winemaker Paul Hobbs and Mosel winemaker Johannes Selbach of Selbach-Oster are in the painful process of establishing close to Watkins Glen on the east bank of Seneca Lake in the FLX. The lake was hidden behind a bank of fog and that’s just one of the pack of mechanical diggers that the team has been used to clear this hillside, dig an extensive drainage system and prepare the ground for the planting of tens of thousands of Riesling vines. The first reason this process has been painful is the massive recent rainfalls here – again last night as I made my way to the site – that repeatedly interrupted planting. That means it’s now a major challenge for the team headed by Paul Hobb’s brother David, the project manager (left in the picture below), to get all the Riesling vines into the ground early enough that by fall they will be hardy enough to survive the first frosts. Johannes Selbach (right in the picture below) has done all he can, but because of his commitments in Germany and elsewhere around the world he con only be here for relatively short periods, one of which ended this morning. 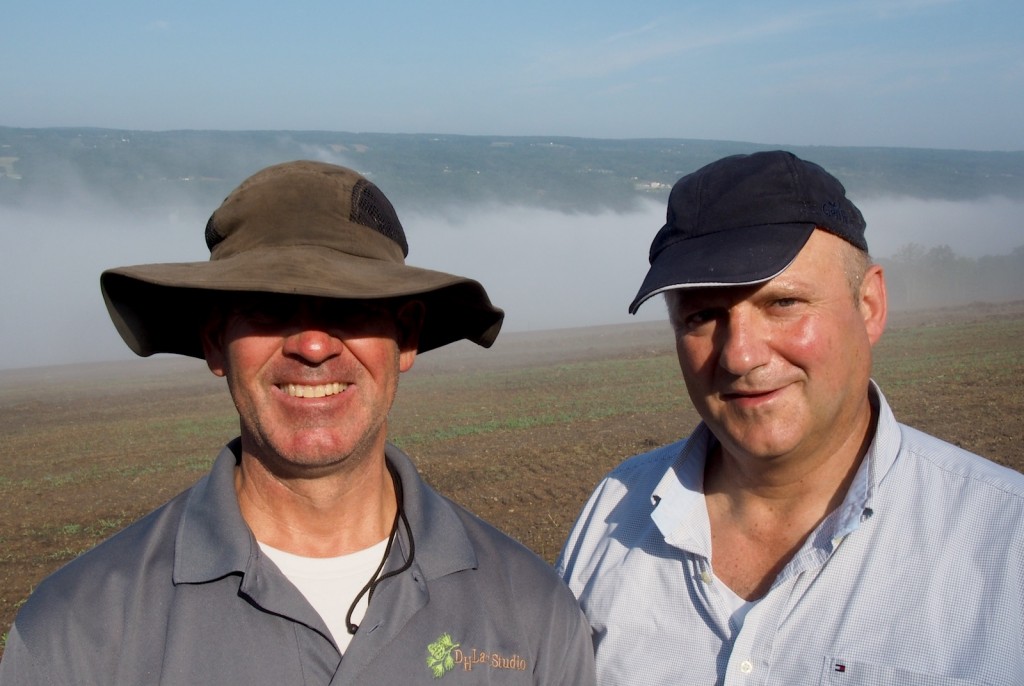 The other reason that the process has been painful is the serious steepness of many parts of the site. It was that very thing and the stony slate soil here that attracted Hobbs and Selbach to this project, this combination reminding both of them of the Mosel Valley; Paul Hobbs loves the Mosel and the off-dry Riesling wines of the region. Slate isn’t rare in the FLX of Upstate New York, but the team’s determination to plant on slate with this kind of grade and to plant the vines in rows going straight down the hillside (i.e. perpendicular to the contour lines) pushes FLX vine growing practices right to the edge. Or, in the view of some local winemakers, that pushes it clear over the edge, because of the danger of topsoil erosion it creates. Of course, the only way you can figure out where the edge really lies, rather than is reputed to lie, is by getting up real close to it, but not tipping over it (in which case you couldn’t come back to tell the tale). And that’s what this unusual team is in the process of doing right now. After the biblical deluge on June 14th large amounts of topsoil had to be picked up by mechanical diggers, then transported back up to the top of the section of the slope they’d just prepared to plant, i.e. back to square one. Understandably, for Johannes, “this is my last project. After this I’ll be ripe for a desert island. Every week we have to reckon that the weather will prevent any work for at least two days! However, I’m sure that we can make world-class Riesling here.” 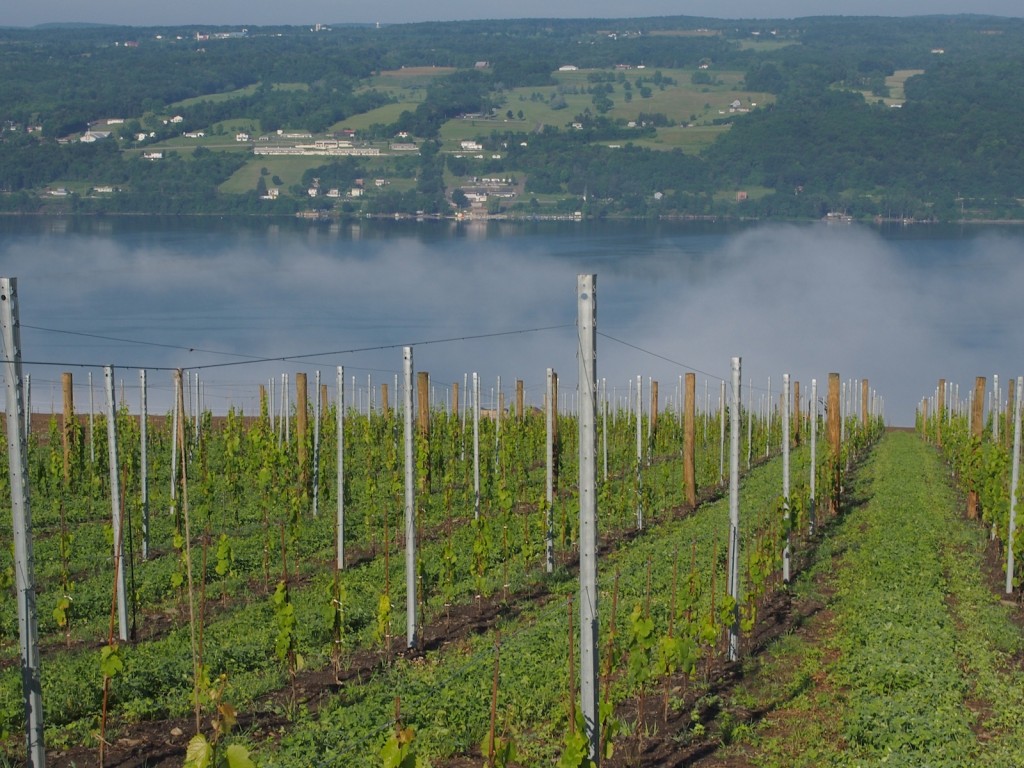 The above picture shows the 2.5 acre initial planting established last year, and gives a good idea of how the finished vineyard will look, however please bear in mind that this is the upper section of the site where it is least steep. This scene also remind me of the Mosel, but there are some crucial differences between the two, the FLX having a shorter and more intense vegetation period, followed by a longer and much harder winter than the Mosel ever experiences. Johannes was here in February, (just a few weeks before I was last here in early March), so experienced the worst cold of the worst winter here in a long time. As he said to me, “if I learnt anything it’s that the time window for doing everything in the vineyard here is narrower than back home, and we have no choice but to use that narrow window.” David has been thinking up some radical ideas to optimize the shortest of harvesting windows, but before these have been tested in the vineyard I can’t reveal them. However, even if this kind of innovation works out making exciting Riesling wines here will still be a high-risk venture that will make the hearts of those involved race during the crucial hours of the harvest. 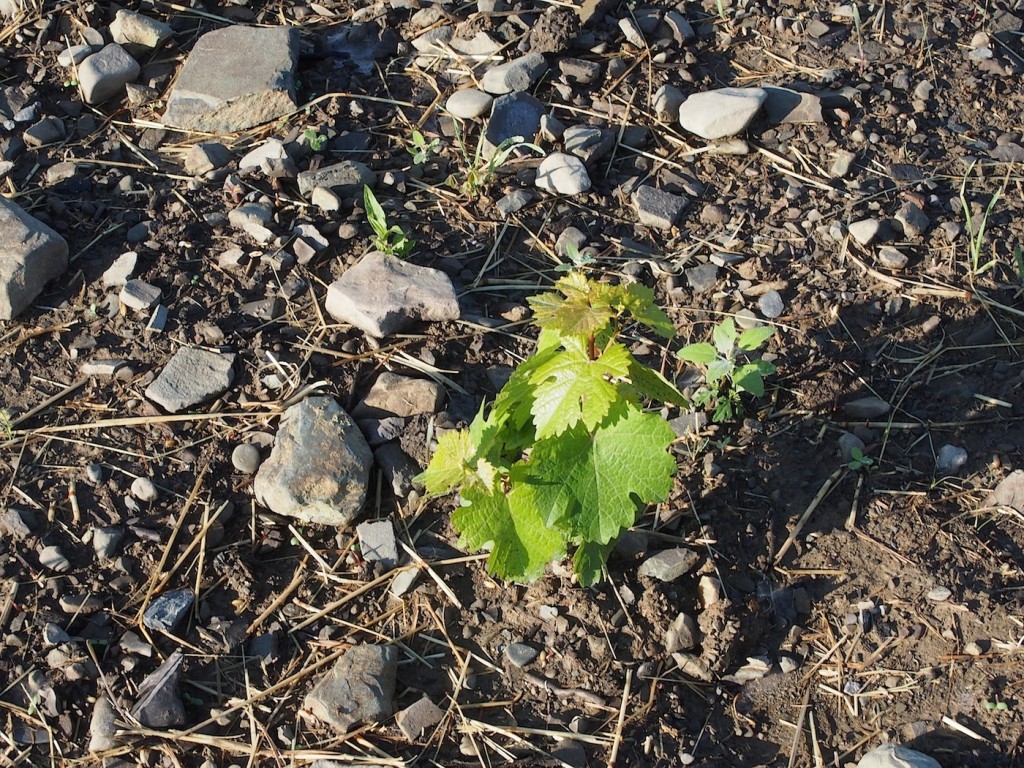 However, the pressing thing now is the task of getting thousands of just planted Riesling vines like the one pictured above to grow in a soil that is anything but rich and fertile. The only advantage of the recent weather is that watering of the young vines will be unnecessary for some time, in spite of stoniness and shallowness of the soil (which means it has a low water-holding capacity). The downside of the rains and the relatively warm temperatures is that this is optimal for the growth of all kinds of fungi, including that which is most destructive to the vine, downy mildew (which destroys the foliage and if the vines are of fruit-bearing age also the grapes themselves). Every daring and innovative wine growing project went through a stage like this when the challenges seemed to only multiply and if anyone can make this project that pushes FLX Riesling to the edge work, then it is a team like Paul and David Hobbs working together with someone with decades of specialized Riesling experience like Johannes Selbach. As he told me. “I wouldn’t have managed this alone, in fact I wouldn’t have started it alone!” 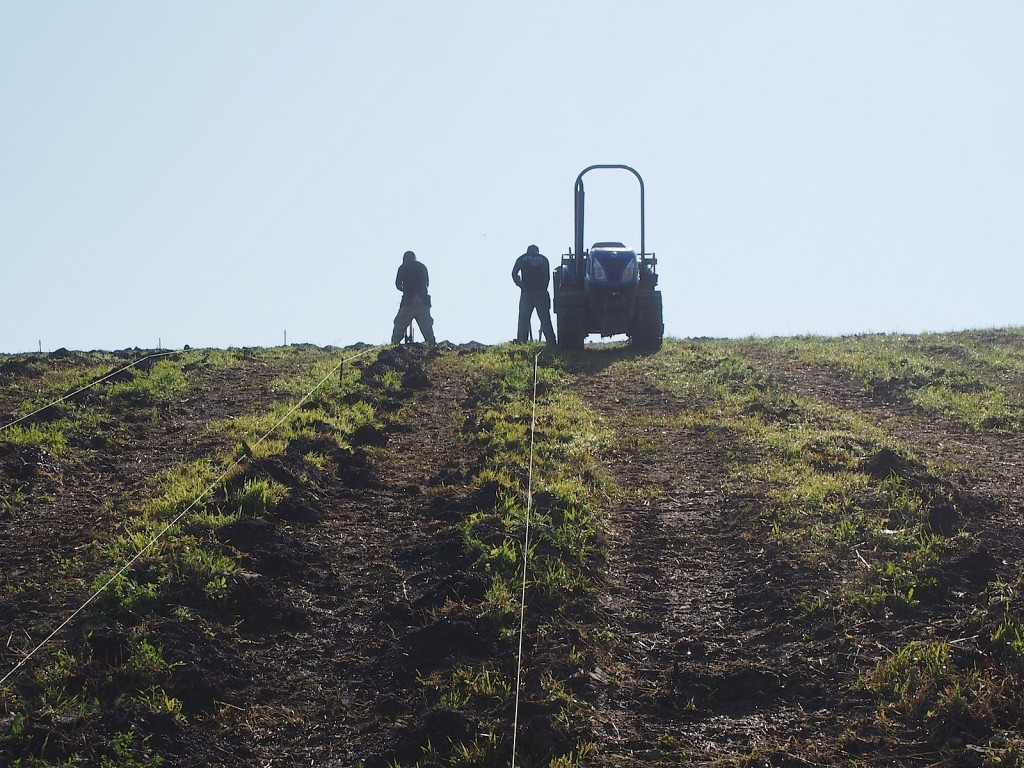 Because this is a story that is unfolding as I write these lines further episodes will follow. They will stretch over several years, because according to the current plan only the northern end of the site will be almost fully planted this year, but the southern end will have to wait until 2017 before it can be planted. Then there will be a total area of 50 acres, entirely devoted to Riesling. Anyone doubting the arduousness of this endeavor is recommended to study the above picture, showing the manual planting of vines in the steepest section of the site. I’ve done this work myself (back in May 2013 close to Berlin), but that was on a much more gentle slope and I was shattered at the end of the day. GOVERNMENT HEALTH WARNING: DON’T ATTEMPT THIS PROCEDURE IN YOUR BACK GARDEN!