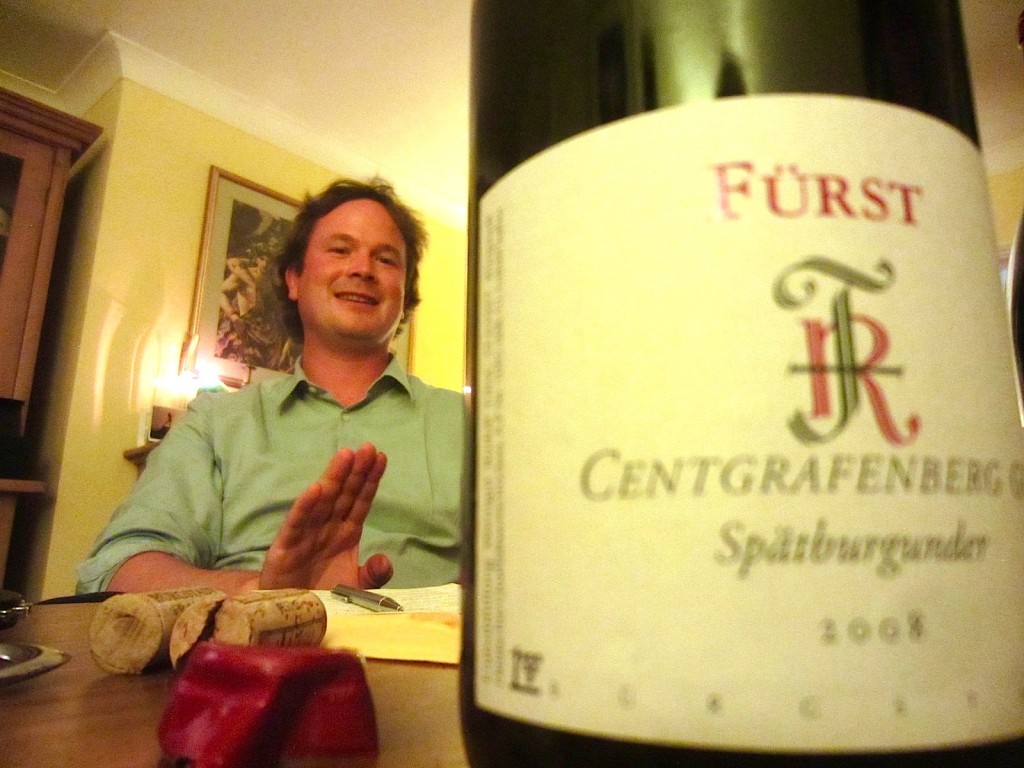 Sophisticated German red wine? Really? Internationally, there’s still a lot of resistance to the idea that red wines from Germany can be better than moderately good and even this would be an exception to the rule. Amongst experts and Somms around the world the standard view is still of Germany as the prototypic cool climate wine producing nation, that therefore the white wines will always work better than reds, and even these will tend to be light in body and high in acidity. Many of those experts and somms are convinced that German red wines are hopelessly over-oaked, if necessary in defiance of evidence to the contrary. The truth is that a combination of climate change and greatly increased ambition in red winemaking already began altering this significantly during the early 1990s. However, the problem with this statement is that proving it requires opening bottles spanning that period and not many German red wine producers have such bottles.

That’s what made yesterday evening’s tasting at the home of Anne Krebiehl MW in Leytonstone, London so special. We tasted 10 vintages of the Spätburgunder / Pinot Noir from the Fürst estate of Bürgstadt in Franken ranging from 2103 back to the 1990 vintage. All were from the same vineyard site, the Centgrafenberg and had been made either by Paul Fürst, the estate’s winemaker since 1979 and/or by his son Sebastian, pictured above. It was a very convincing piece of proof that at least some German reds have been worth taking seriously for a long time, that there has been a very positive development in the winemaking skills for these wines, and, at least amongst the leading makers of red wines in Germany, also in their feeling for harmony, elegance and delicacy in these wines. 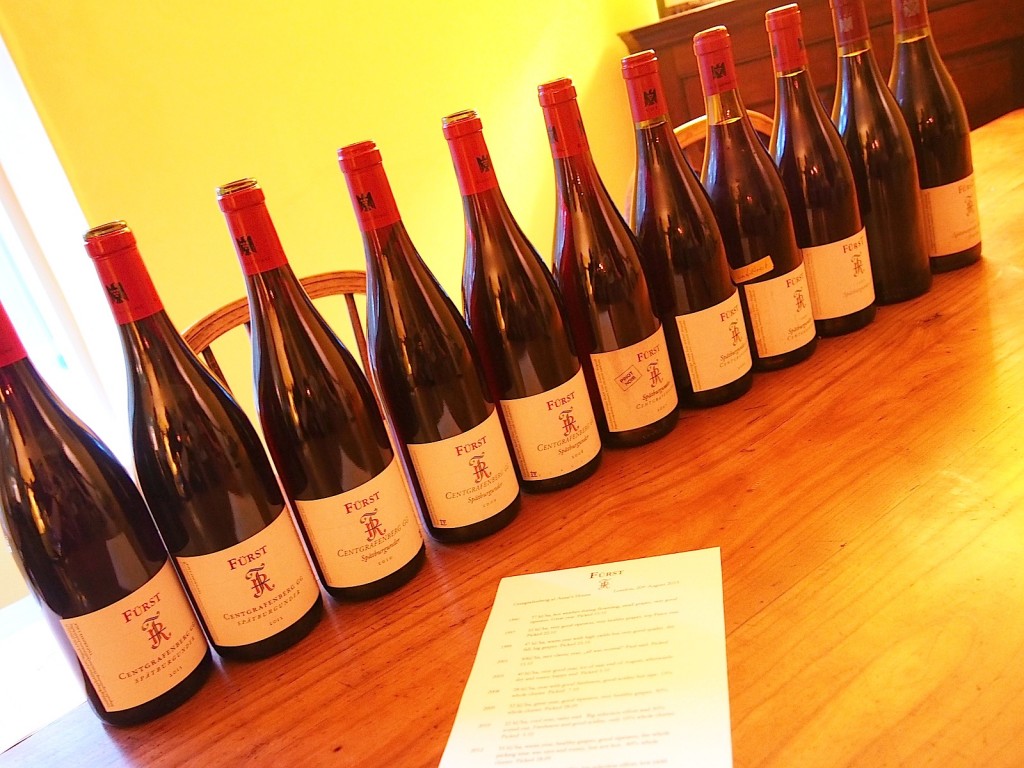 On one level, the vitality of the 1990 Centgrafenberg Spätburgunder  – the first wine I ever tasted from the Fürsts back in spring 1993 – was the most important piece of news, because that’s something few wines from the Pinot Noir grape manage to retain at this age. The smoky note in this wine was very distinctive, and Sebastian Fürst explained that this is rather typical for the Spätburgunder clones from the vine breeding station in Freiburg, Baden (in the far SW of Germany). There was also an elderberry aroma that grew considerably in intensity as the wine aerated in the opened bottle. However, on another level, the consistency in quality of the entire row was really more impressive that that singular success, since consistently high quality is something famously difficult to achieve with “fickle” Pinot Noir anywhere in the world, including its homeland of Burgundy, France. It’s fickle, because it presents the winemaker with a complex and interlocking set of challenges, and focusing too much on one obvious issues like the tendency to pale color, can lead to other problems. Let’s be frank, I’m glad I don’t have to make red wines from this grape!

In spite of the consistency of quality there was an important stylistic shift through the row of wines. Often this is portrayed in the wine and gastronomic media as a direct product of the generational change, but this cannot be so. The super-elegent and now beautifully mature 2001 Centrafenberg Spätburgunder from Fürst, had a freshness and bright red fruit aromas that the more robust wines of  1990, ’97 and ’99 vintages didn’t have. This wine was made 6 years before Sebastian began to be involved in the winemaking, so it can only have resulted from a shift in his father’s thinking. However, this was certainly the path that Sebastian also followed when he began working in the vineyards and cellar, as the 2009, ’10, ’12 and ’13 vintages (vintages labelled as “GG” or Großes Gewächs, the VDP producers’ associations equivalent of the French Grand Cru). The 2012 was the perfect example of this, already super-silky in spite of its considerable  power, very subtle and delicate in aroma in spite of the ripeness (which can make red wines lean in a sweetish and one-sidedly rich direction). Lastly, the enthusiasm of the other tasters for the “lesser” vintages of 2008, ’10 and ’13 with their crisp acidity must be passed on. This was not an occasion when concentration or scale was sought above all else, in fact there was more excitement about the wines “freshness, life,” their, “leafy hints,” and their, “poetic,” and “sexy” qualities.

Maybe that says something about the tasters too? Certainly, Nigel Greening – the owner of Felton Road in Central Otago, New Zealand – produces Pinot Noirs – that share these qualities and stand out in their national context for that. David Motion (thanks for the photograph at the top) of The Winery in London is also a seeker after character and elegance, rather than brute force or opulence. Amazingly, it wasn’t only for us the first time that we’d tasted 10 vintages of these wines in one go, but also for Sebastian Fürst. So the effort that all the participants made was well worth while. I’m only sorry that Anne Krebiehl’s table couldn’t seat more, because the message of yesterday evening deserves to be spread!