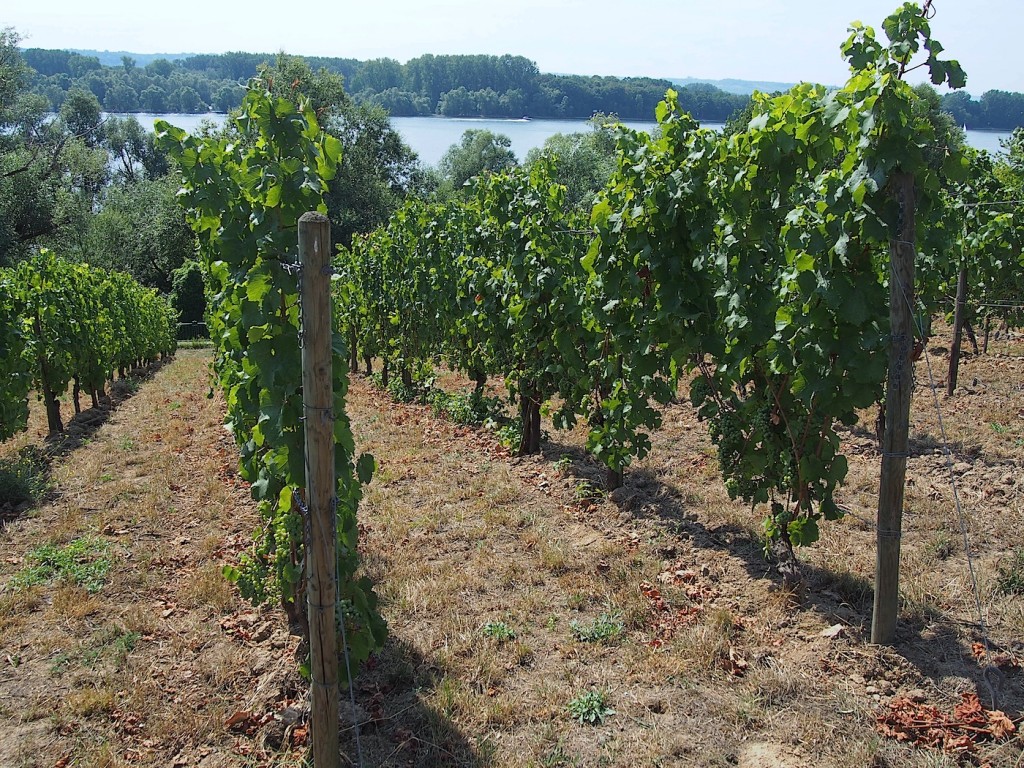 After the hottest summer in Western Europe since 2003 & 2006 and the driest summer in Western Europe since 1961 how do the grapes look? I have to admit the combination of hot and dry made me worry that a lot of the vineyards in Germany and elsewhere would look yellowed, maybe wilted, or even sometimes close to collapse. However, I just got back from an intensive tour of the vineyards in the eastern end of the Rheingau with Hajo Becker of J.B. Becker in Walluf, Rheingau and was very pleasantly surprised by what I saw. By no means is 2015 doomed to be a problem vintage, in fact the great majority of vineyards that were well cared for looked very good.

The photograph above shows the plot in the Eltviller Rheinberg site from which J.B. Becker regularly makes a dry Riesling and harvests the base wine for the sparkling Riesling Sekt. As you can see, it lies right on the bank of the Rhein and that makes it a warm location. The soil is very sandy, which means it can hold little water. This together with the heat and drought has resulted in the grass between the rows completely browning (something it rarely does in the generally moist climate of Germany), yet the vines are obviously in excellent health. Only in one small corner of the vineyard did I see any drought stress, and I saw absolutely no sign whatever of fungal disease. I also found the first berries that were beginning to soften (technical word: verasion), a sure sign that  the final ripening process is beginning. 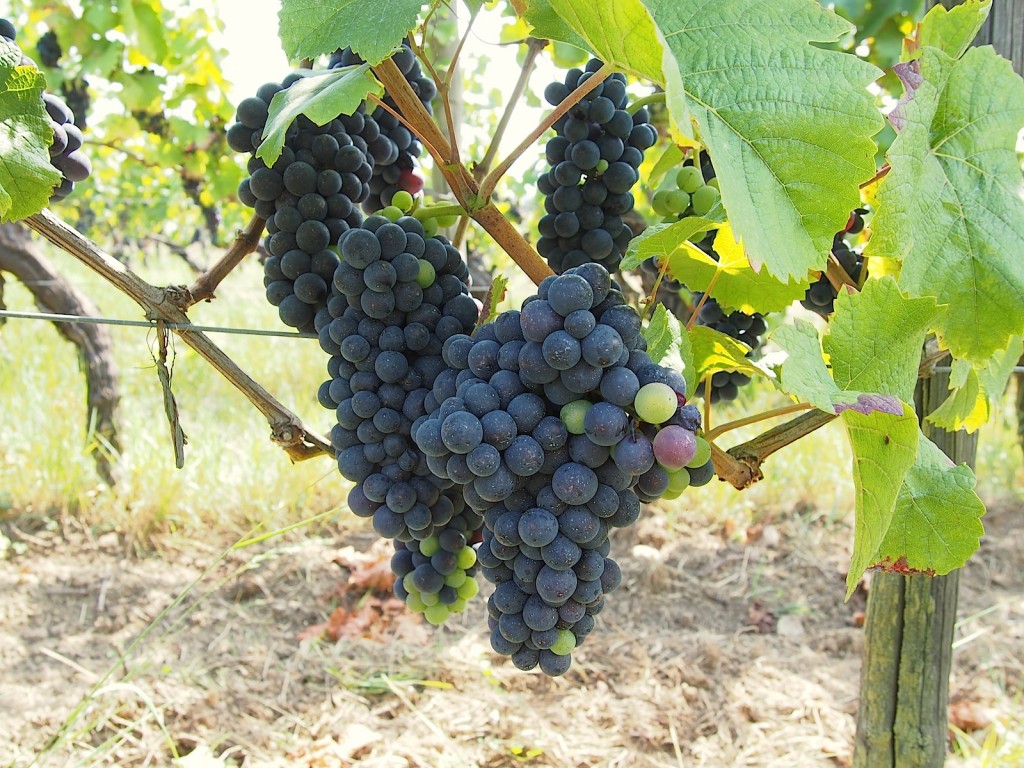 This softening is accompanied by a change appearance of the grapes. White wine grapes become translucent, but this is very difficult to photograph (my Olympus EP-5 is great, but I don’t usually have a tripod with me or all the time in the world). Red wine grapes turn color at verasion, and this is much easier to photograph. The picture above shows grapes on Hajo Becker’s oldest Spätburgunder / Pinot Noir vines in the Wallufer Walkenberg site that were planted in 1959. As you can see, the change of color is almost completed, and they look extremely healthy. This is the ideal state for red wine grapes at this point in the year year, and it suggests that as long as theres on heavy rainfall between now and the harvest this could be an excellent red wine vintage for Germany. Don’t forget, Germany has the third largest area planted with Pinot Noir in the world!

Riesling dominates in the Rheingau where it accounts for about 70% of all the vineyards (only the tiny Mittelrhein region has a higher percentage of Riesling in Germany, or indeed the world). From what I saw here yesterday and today there is clearly variation between the vineyards of one commune to the next, because summer storms brought rain in some places and not in others. In a few places, like the Rüdesheimer Berg vineyards, the intensity of the storm (more than two and a half inches of rain in about half an hour!) was so great that it actually reduced the size of the crop. These factors, and differences in cultivation methods, have lead to widely varying crop levels. That and the longer time until the late-ripening Riesling grapes are ready to pick, makes it yet more difficult to predict the result. However, the general good health of the vines and the fact that serious drought stress has only occurred in a few corners, suggests that a positive result can be expected as long as the pre-harvest period and the harvest itself aren’t plagued with heavy rains. 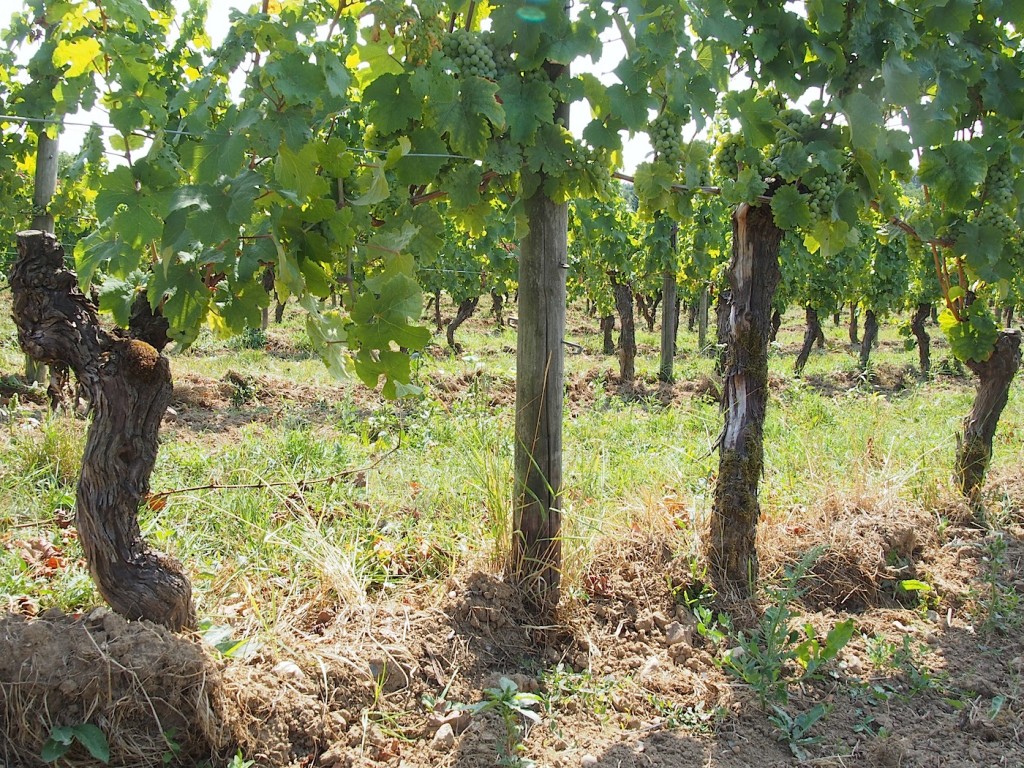 Famously, those who predicted the end of the world fell became a laughing stock, and it’s the same with those who dared to predict to a great vintage many weeks or even months before the first grapes were picked. On the West Coast of America some wine producers have foolishly been playing that game this year, basing their prediction on the exceptional advanced development of the grapes. Excuse me, but this is complete BS! My experience says that vineyards like the plot of old Riesling vines in Hajo Becker’s holdings section of the Wallufer Walkenberg site, pictured above, give very good to exceptional wines year in, year out. There are many, many examples of this in Germany, Western Europe and the world of wine as a whole. The excitement about the new vintage each year is a good thing, but even good things can be carried too far! A good wine in your glass is the main thing!