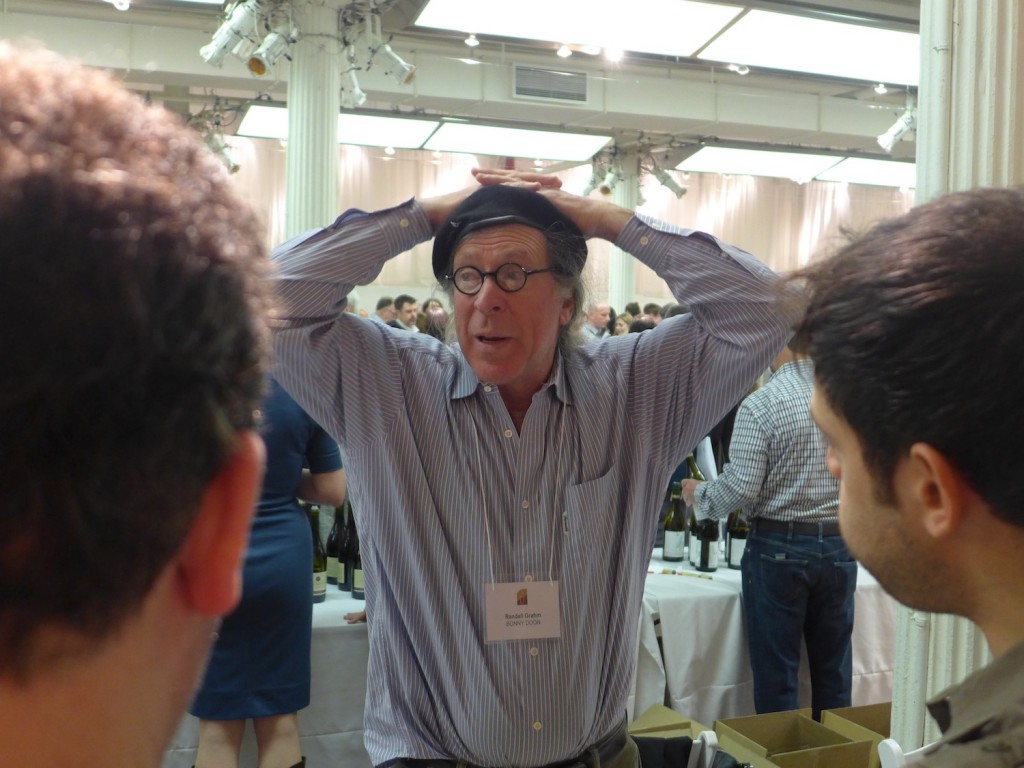 This is how most of the wine scene and the wine-drinking public see Randall Grahm, but who is the “court jester” of Californian wine really? And are his wines as “sunny” and “fun” as they are made out to be, or do they taste very different from what most people imagine? Answering those questions requires me to tell quite a story!

Let me straight be with you, for me Randall Grahm (vintage 1953) of Bonny Doon Vineyard in Santa Cruz, California was the first American rock star winemaker, and for that reason alone I always get a thrill when someone pours me a glass of his Le Cigare Volant red, a blend of grape varieties that originated in the French section of the Rhône Valley. The label is based on an old engraving of a French château surrounded by vineyards to which the graphic designer added a cigar-shaped UFO floating in the sky that’s firing a dangerous looking red ray into the vines. There’s quite story behind this about the town of Chateauneuf du Pape in the Rhône banning UFOs from landing, but it was Randall’s genius that turned this story into this unique label (scull down to eyeball it). It was quite a shock to see it the first time in 1986 in a San Francisco wine bar. “This is something really new from California!” the server said to me as he poured me a big glass of 1984 Le Cigare Volant, the first vintage. It tasted nothing like the heavy, oaky “Reserve” Cabernet Sauvignon reds then so fashionable and I immediately knew this was something different, special. That wine, and the thoughts of its maker get a whole blog posting today (it will be followed shortly by one about Randall’s dry whites and rosé).

One of the high points of Randall’s career came in 1989 when Wine Spectator Magazine put him on the cover dressed as the Lone Ranger. That was a joke about him having been nicknamed a Rhône Ranger because of his fascination with making wines like Le Cigare Volant, and it was the beginning of his “court jester” image. Finally, on March 2nd, 1992 I stood face to face with the wild-haired, wild-eyed, wildly funny and dangerously creative young Randall in the tasting room of his winery.  He described the kind of wines he was making as, “red wines, sunshine wines, fun wines!” so this is where that perception of the Bonny Doon wines has its root: he said it a thousand times! Then he poured the first vintage of his game-changing Pacific Rim a dry white Riesling, which tasted nothing like that at all.  When I asked him what made California a special place to make wine he told me, “1) lack of history, 2) flexibility, 3) cheap land, 4) sunshine.” I found him totally fascinating. Some the wines he poured for me tasted great, the rest were very solid, which was good enough for me. His was clearly a freewheeling creative enterprise and the wines that he was making were all a work-in-progress.

I’ve kept in touch with Randall ever since, and the periods when contact was more sporadic never eroded the openness of the relationship. I remained interested, because he continues to develop exciting new wines, and the latest vintages of his old favorites are often stunning. He’s the Neil Young of winemaking, each of his new creations surprising me just like Neil’s new songs, and the radical reinterpretations of his old numbers he frequently does. That’s why a couple of years back I was excited to receive an invitation to an audience with the Randall at The Breslin Restaurant in the ACE Hotel just off Broadway, New York City on November 18th, 2013. I’d last seen Randall 18 months before in San Francisco, not long after he’d sold the Pacific Rim brand and winery in the Columbia Valley, Washington State after cranking production up to over two million bottles of Riesling per year. He told winebusiness.com, “This gives us some wherewithal to develop our 280 acre San Juan Batista property, 85 of which will comprise our new estate vineyard, at a quicker pace… We’re also retiring a significant amount of debt with this sale and I might go out for dinner tonight with some of the proceeds.” At our San Francisco meeting in the spring of 2011 he’d told me he was planting some of those vineyards from seed, which is definitely not the normal way of doing things, so this is clearly a very daring project. If anything it became even more daring since then! 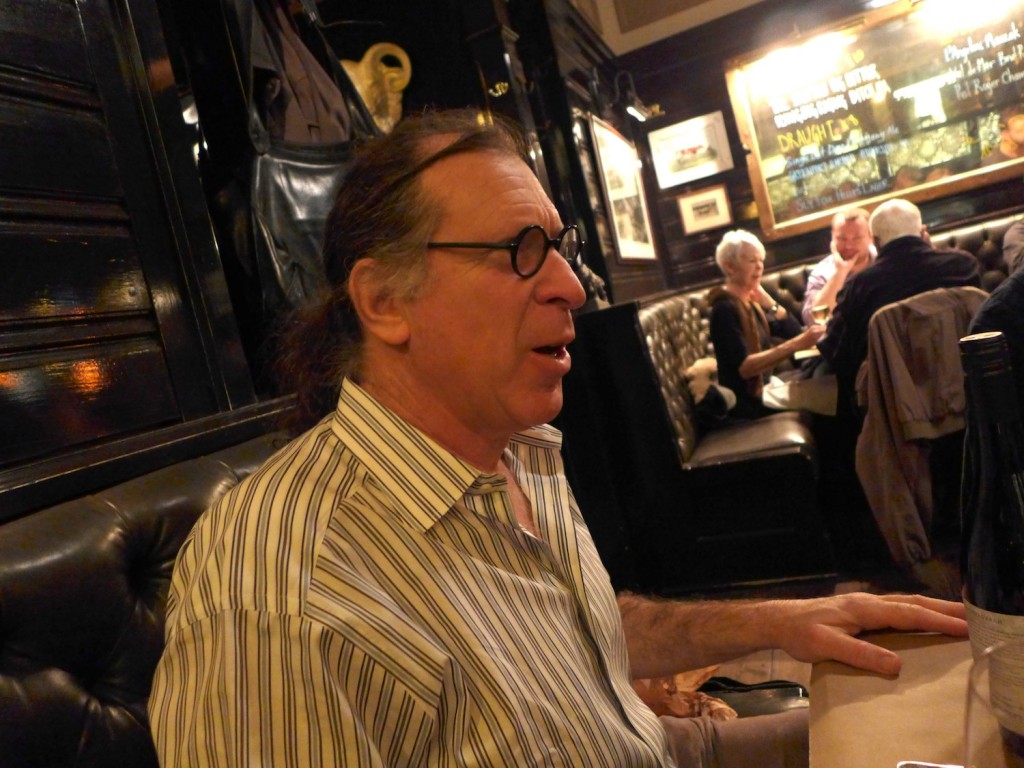 I got to the Breslin exactly on time, which meant that I had some time to talk to Randall before the other journalists and somms who were invited turned up. I may be an Englishman in New York, but I’d already learnt how to hustle and get ahead of the game Big Apple style. After pouring me a couple of his latest wines Randall suddenly turned pensive and within moments his usual expansive tone had vanished, and that’s when I took the above photograph.

“Nobody’s written about the sea change in the wine industry. 20 years ago it was much more idealistic. People in the wine industry wanted meaning and now they want money. OK, I’m interested in both. Now there’s a cynicism and self-consciousness, and a sense of randomness…” His words instantly reminded me of the scene in Cameron Crowe’s autobiographical movie Almost Famous in which the aspiring young music journalist William Miller, the central figure of this great rock movie, is told something very similar about the music industry by Lester Bangs, then one of the senior rock journalists of America. In retrospect, that moment in The Breslin was the conception of my series ROCK STARS OF WINE AMERICA, although it took me almost two years to realize which that e-books for Kindle was the right medium was right for my subject, because that required me to overcome the stupid idea that I needed to print them.

“20 years ago your job as a winemaker was to make a really great wine. If you did that and the price was OK, then you sold it. The weird thing is now you don’t know if you can sell it however good it is! Then you’ve got all the new shock labels. Is that how you sell wine now?” I couldn’t help thinking of some wines Randall himself had created with new shock labels. Then he sheepishly admitted setting that ball rolling was partly his fault, but this didn’t make what he said any less disturbing. What did it mean for him and his own wines? Sadly, we never got the chance to talk this through in any detail face to face, nor have I been able to taste recent Bonny Doon wines in a more thoughtful situation. For this reason I ordered samples and he happily provided them. 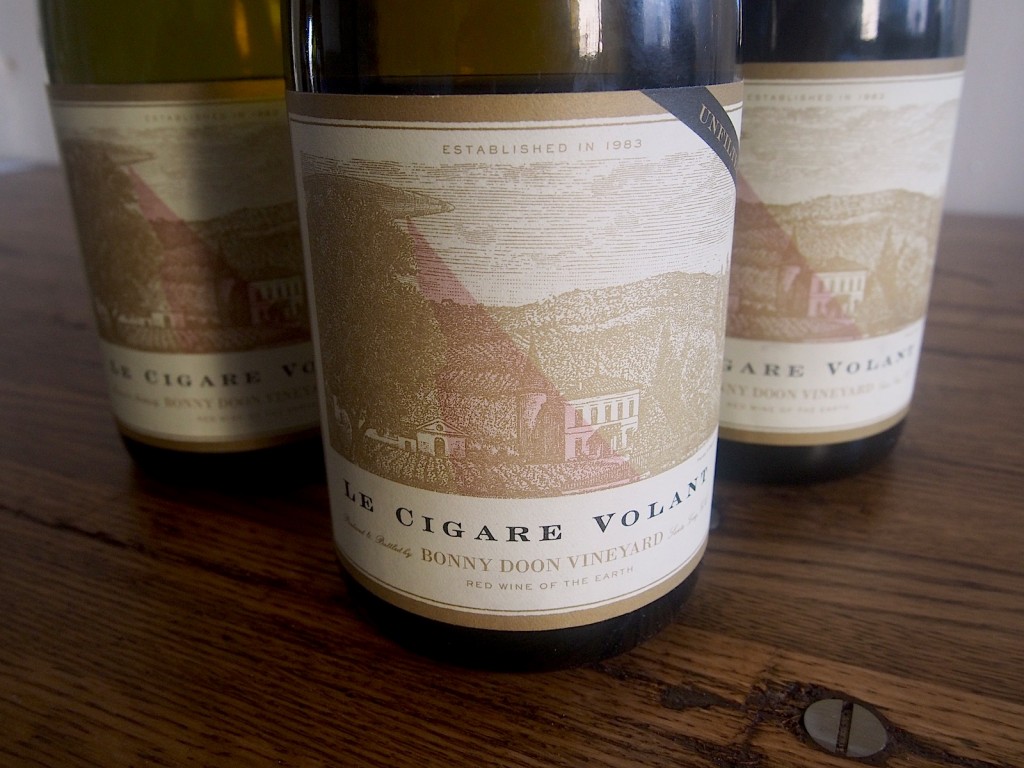 These bottles, more than any others he sent made me, convince me that Randall is a winemaker who has been radically misunderstood, because too many somms and journalists who tasted the wines couldn’t get that court jester image off him out of their minds. In a blind tasting I would have confidently identified all three of them as European wines of elegance and sophistication. The 2011 Le Cigare Volant immediately reminded my very much of the first time I tasted the Chateauneuf du Pape Vieux Telegraphe back in the Mid-1980s. On more careful reflection those wines were a bit more dryly tannic and a shade less fruity than the 2011 Le Cigare Volant. So this wine does have a certain Californian aspect to its personality, but in the CA context it is seriously dry, mellow and  mysterious; I get the mystery most in the cool herbal freshness at the finish. I would never have guessed that it has 14.23% alcohol, because the wine is seamless, but you could say very much the same about the best reds from the Southern Rhône.

The 2010 Le Cigare Volant (I had the unfiltered bottling) is a more meaty wine with an edgy side to it that is unlike the 2011, and either you will love it or not depending upon your palate. I really went for that edgy side, perhaps because it matched the more savory flavors of this wine really well. Possibly that edge is due to the inclusion of a big slug of wine from the Carignan grape in the blend, which under hot dry conditions tends to retain more fruit than the other Rhône grapes, but never gives subtle wines. However, there was no doubt in my mind that the 2009 Le Cigare Volant (also the unfiltered bottling) was the star of the trio, perhaps because it has moved out of the youthful, fruity phase of it’s life, but still retains so much energy and freshness. I love that combination in wines of all kinds. As one of the friends who tasted with me said, “it’s got all the earthiness and the mushrooms, it’s dusty too…but there also this raspberry note.” I couldn’t have described better myself, so I’m not going to do so. Seeking this many-sidedness, that means embracing the non-fruity character without rejecting the fruit, is the at the heart of Randall Grahm’s art, and he is now a master of it. Somehow Randall has found a way to negotiate that sea change in the wine industry and the stormy waters they brought, or perhaps his own stylistic development maneuvered him out of the harms way without him consciously seeking a safe harbor? In the end it doesn’t matter which of those it is, it’s the results that count.

After tasting these wines I also drank some of them and felt elated. That is something only a great winemaker can do with three consecutive vintages of one wine!