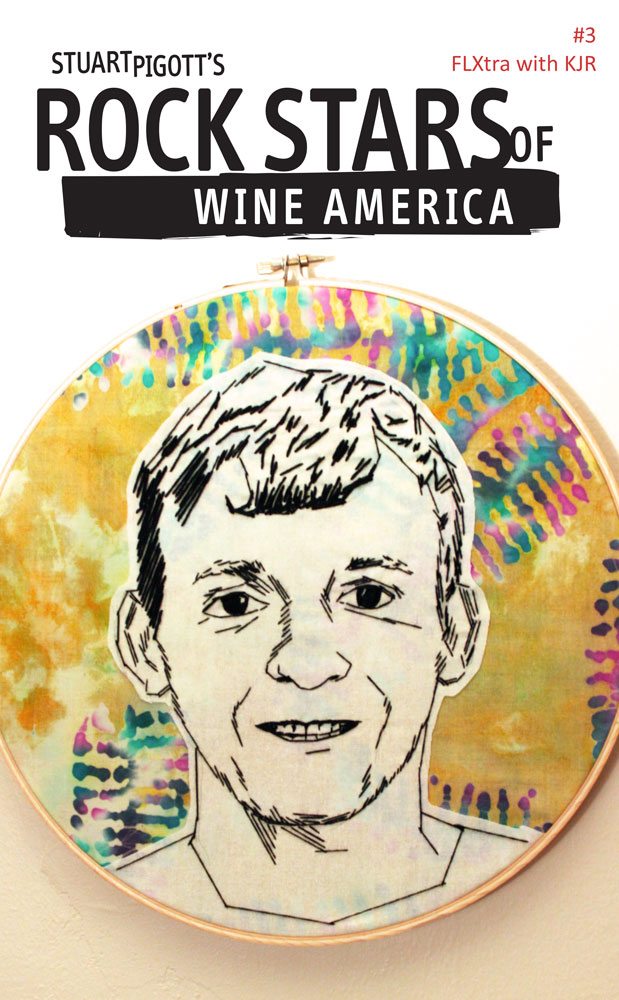 There has been some criticism of “ROCK STARS OF WINE AMERICA #3: FLXtra with KJR – This is a Love Song” because of things that are missing from my latest e-book, and not without some justification. The problem is that it had already ballooned from the planned 100 manuscript pages to 125 pages. I decided to stop it there before it resembled a 19th century Russian novel more than a piece of 21st century close-to-the-ground / gonzo journalism! There are already a couple of dozen major characters and the range of subjects that is at least touched upon is vast. I wanted to avoid massive overkill and the widespread yawning I feared that this would lead to.

One of the things that definitely gets too little space is the snow and ice of winter. I only hinted at that by comparing the mild conditions of March 2016 with the arctic ones of March 2015. The impressive thing about the FLX community is how resilient it is in the face of major snow and ice, nearly all the roads remaining clear. The price of that it is high banks of snow at the sides of major highways and a miniature version of the Himalayas along the sides of smaller streets in places like Geneva (something I did mention in passing).  Life and business continue, even if the life of some wines stops dead in its tracks during the Big Freeze. 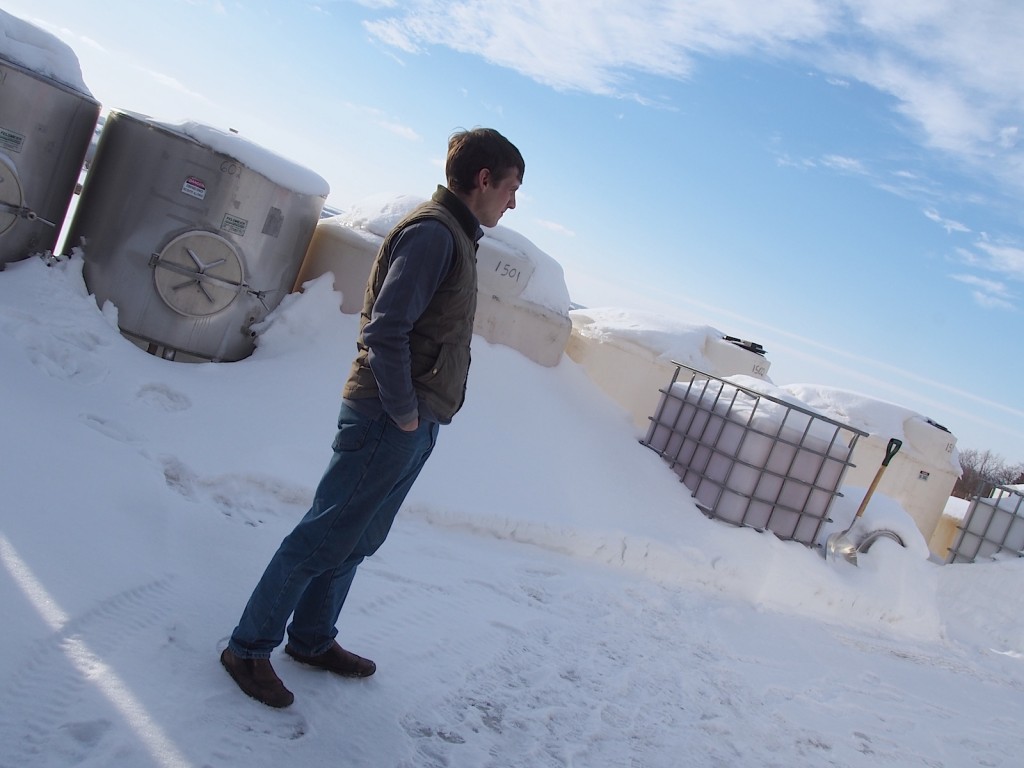 The picture above of KJR (Kelby James Russell) was taken in March of last year and shows him with the outdoor tanks at Red Newt Cellars where he has been winemaker since December 2012. The wine in those tanks was partially frozen for many weeks, which is pretty unusual on Planet Wine and would have deserved some serious examination. Basically, much of the water in the wine becomes a thick layer of ice directly behind the stainless steel skin of the tank, with highly concentrated liquid wine in the center of the tank. (No, I don’t know what that stuff tastes like, but I will find out at the next opportunity). This is then diluted back to its state before freezing when spring comes and the ice in the tank melts. That’s a dangerous process, because around freezing point wine is most susceptible to oxidation. I know that all sounds a brutal attack on the fragile thing we imagine wine to be, but some of my favorite FLX Rieslings went through all that!

Another criticism made was that I didn’t spend enough time eulogizing the beauty of the region, which is considerable. In this case my preferred method was understatement, and I think that in an understated way there’s plenty of  graphic description of the region’s landscape, most of it positive. Of course, poverty isn’t pretty, there’s some of that in the FLX, and I didn’t pretend there wasn’t. However, there’s no doubt about the fact that I avoided writing pages of luscious description of my favorite ravine and/or lakeshore, since I figured this stuff is widely available on the Internet and on those most old-fashioned of things, postcards. I’ve never been out on one of the lakes on a boat so I would have had to set that up to describe it, and every serious gonzo journalist avoids set-ups like that on the grounds that they are predictable and boring. 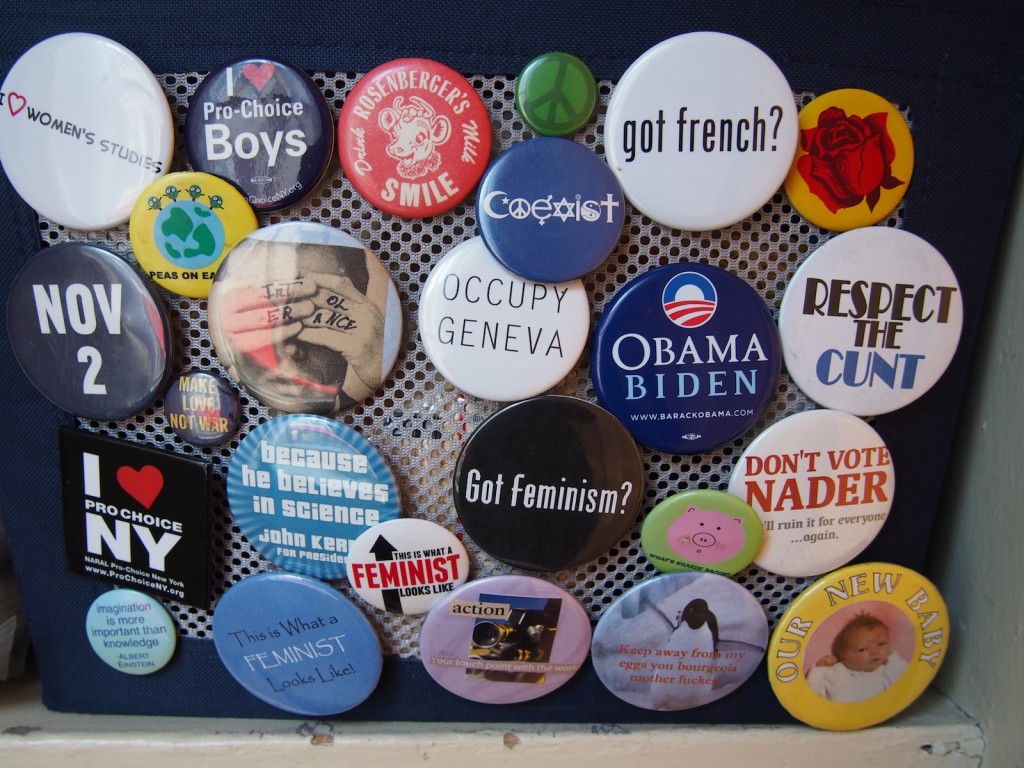 What I do think is missing without good reason is some more detailed description of the domestic worlds of my main figures. For example, the above is the political button collection of Julia Hoyle and, of course, this says something important about her. Here too space was the first problem, and in this case there was also the desire to avoid repeating  things I reported Julia saying to me. I did mention that her and KJR’s cat Cannonball likes to sit inside their fridge, and there were requests for me to show what that looks like, so for once this very serious gonzo journalist has caved in and is posting a cute furry animal photo. But, remember, I’m not doing this trying to ratchet up the number of hits on this website or of my Facebook “friends”! 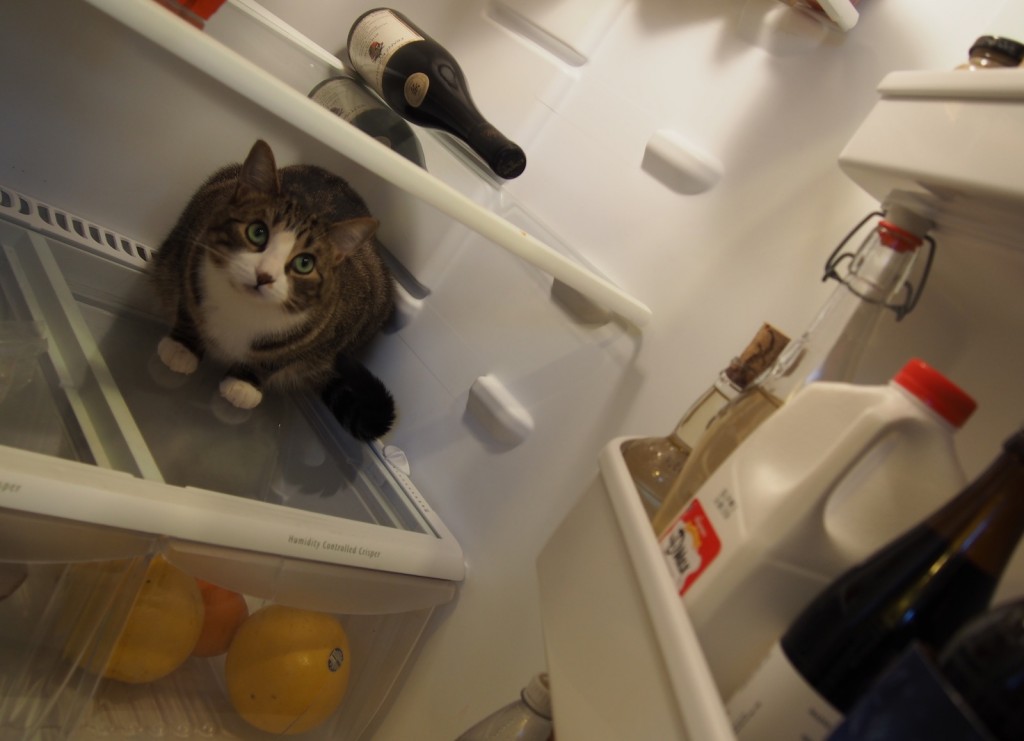 There is much else to say about the FLX that I couldn’t fit in my e-book, and there will be more about that shortly on this page. May the FLX Force be with you!