Berlin Wine Diary: Day 1 – WATCH YOUR BACK the Riesling Movie (Part One) 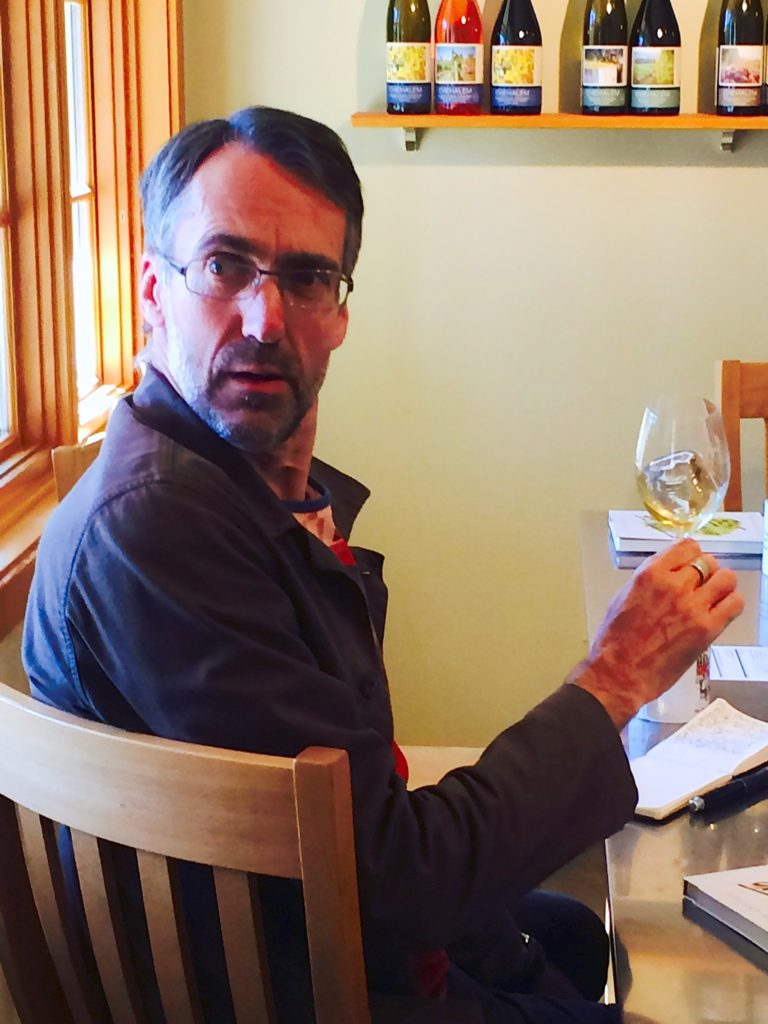 Although work on my movie was completed several months ago my thoughts have returned to it, because my producer and I recently submitted it for the 2017 Sundance Film Festival. We feel this would be an ideal venue for it given the unconventional nature of the work. Here is a brief introduction to the project which I began planning in 2013, and for which shooting and editing began in earnest early in 2014. Before leaving New York I did a small private screening for a group of friends and it was encouraging to hear how they found the result funny, but also informative and to see how well they responded to its distinctive style and tempo. Of course, not everyone will love it!

Of course, even the title of the documentary movie I made together with producer, editor and cameraman Klaus Lüttmer of Berlin in Germany will strike many people as abnormal. Either half of the title looks fine on its own, but the combination of the two halves is downright strange. That’s because the 65 minute movie tells a seriously strange story, and we felt it would be cruel to make viewers expecting a regular movie of the kind Hollywood churns out, when it’s actually light years removed from them.

Making this kind of movie wasn’t our intention at the beginning though. Then our goal was to make an entertaining 20-30 minute film about the Riesling grape, its wines and the global network of fans who drink and celebrate them. I’m a British wine journalist living in Berlin and New York and Klaus, who also makes wine in the Ex-East Germany, felt that I would provide a colorful anchor. Believe me, we wanted to tell a seductive tale of wine and food, funky winemakers and beautiful wine regions scattered around the world. However, the unexpected and shocking events that unfolded during the shooting swept us along in a gonzo direction far removed from our original plan. Or would you call it normal that some fans of one kind of wines threaten the lives of certain fans of another kind of wine?

We live in strange times and WATCH YOUR BACK – The Riesling Movie (Part 1) explores this situation with brutal honesty. When Klaus and I began shooting in New York City and Berlin in 2013 Klaus Lüttmer and I were rather naïve, but it wasn’t long before we realized that our movie could only end up being a dark and disturbing tale drenched in fear and paranoia. Sometimes that made it exciting to work on, but at other times I literally feared for my life as a group of fanatical Chardonnay fans pursued me across America from Venice Beach in LA to Manhattan in New York. Were they only trying to frighten me off promoting Riesling, or were they seriously intending to rub me out? It wasn’t clear.

A number of things made that last possibility seem plausible. The booming American wine market of the early 21st century was the scene of battle for market share and Riesling enjoyed a sustained renaissance there that culminated in a “Summer of Riesling” being celebrated each year in bars and restaurants coast to coast. On the other hand there are almost 100,000 acres planted with Chardonnay in California and the producers of the big brands of these wines form a lobby who didn’t welcomed any of this. No doubt they would have been delighted if all the Riesling advocates had been spooked into silence. Maybe the fanatics making up the self-styled Chardonnay International Army (CIA) were operating without industry support or financing, but their actions appeared to meet with the tacit approval of the Chardonnay lobby.

The prime motive of Klaus Lüttmer and I was to record these events in a form that accurately reflected their nature. Shooting “from the hip” with cameras small enough not to attract attention was often a matter of necessity, but as this strategy developed we quickly came to relish the edgy look it gave our movie. The fact that I ended up shooting large sections of the movie myself – I have a BA in Fine Art from a London art college, but I’m not a trained cameraman – accentuated the grungy aesthetic we locked ourselves into.

However discrete I tried to be about that material my activity with the camera was noticed by the thugs who were trying to intimidate me. To our horror this inspired them to send us a series of videos that made their threats gruesomely explicit. Fearing that it would only enrage them further we bit the bullet and included this material in our movie. It makes an extreme counterpoint to the thoughtful analysis of the development of the global wine industry provided by experts like economist Dr. Karl Storchmann of NYU, but this also seemed to say something important about the contemporary wine world. Wanting to include all those facets made the movie stretch and stretch until we reached 65 minutes.

The result is totally different from other recent documentaries on wine subjects such as Somm (dir. Jason Wise, 2013) or American Wine Story (dir. David Baker, 2014). Nor is there much similarity between our movie and the feature films Sideways (dir. Alexander Payne, 2004) or Bottle Shock (dir. Randall Miller, 2008). Our recommendation is that you see it and if you end up cheering for Riesling, then watch your back!

One Response to Berlin Wine Diary: Day 1 – WATCH YOUR BACK the Riesling Movie (Part One)