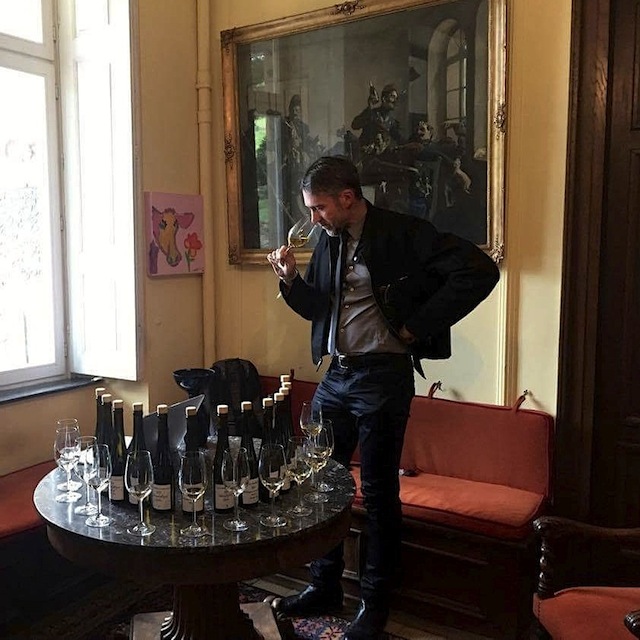 I make no apologies for using this photograph again, because here I am tasting one of the three 100 point wines, the 2015 Scharzhofberger Riesling Trockenbeerenauslese from Egon Müller-Scharzhof in Wiltingen on the Saar, in my extensive report on the miraculous 2015 and 2016 vintages on the Mosel for JamesSuckling.com. You need to be a subscriber to read the tasting notes and see the individual scores, but anyone can read the opening text and see which wines we tasted – there were almost 700. Here’s the link:

I’ve been tasting the young wines on the Mosel and its tributaries the Saar and the Ruwer since the 1983 vintage and I never tasted such a stunning range as those from the last two vintages during the long week I spent in the region last month with the managing editor of JamesSuckling.com Evan Mah. Firstly, the number of disappointing wines was very small although we spread our net wide to take in world-famous producers and rising stars, small estates and the largest in Germany’s most famous wine region. More important though is the slew of wines that scored 95+, including a couple of dry wines and six Riesling Kabinetts. The names of some of the producers up in that exalted realm may well be new to you, and the name on the label of one of those 100 point wines will come as a shock to many: Carl Loewen in Leiwen on the Middle Mosel. Congratulations to all the Mosel producers who have dedicated themselves to quality, originality and individuality in this complex and fascinating region. You made this report possible!