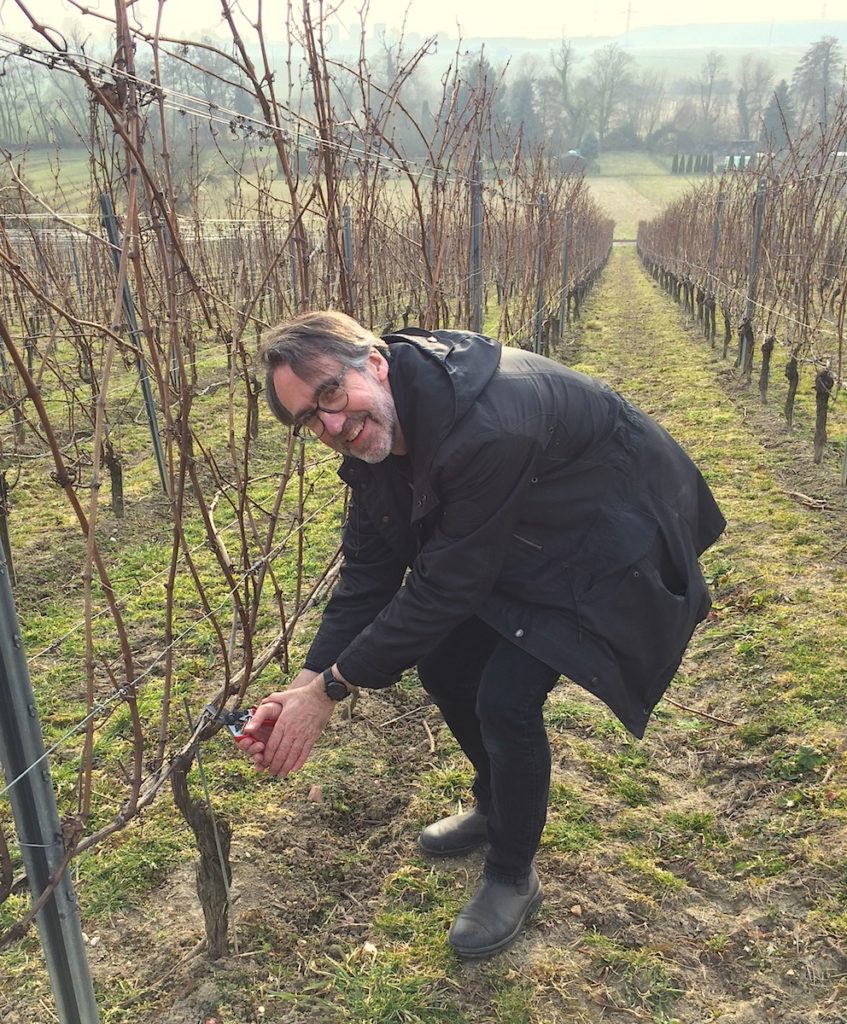 Yesterday, my assistant Peam Saisombat, a young Thai woman studying winemaking at the famous Geisenheim wine university, and I pruned 6 rows of Riesling vines in the Nonnberg site of Weingut Flick in Wicker at the eastern end of the Rheingau. Reiner Flick has leant to us them for the rest of this year so I can make a Riesling wine from in his cellars. And we’re doing all that in front of the camera for the feature length documentary film WEIN WEIBLICH.

The deeper I get into this beautiful and crazy thing the more I ask myself how did I get in so far so fast? Yes, I live in Germany and I’ve been writing about wine every since I arrived here a quarter of a century ago, but I’m not a young woman winemaker on the Rhine, and that’s what WEIN WEIBLICH is all about. How should I translate that title into English? Literally, it means wine womanly, but I feel happier with Wine, Women & Rhine because it tells you about the three essential ingredients of this revolutionary project. Revolutionary? Which other movie showed in gritty close-up how vines are cultivated and wine is made with a predominantly female cast? None that I know. For more information see our German language website:

I can’t deny that right from the beginning I never hesitated, and from the moment that Marco Schulze first pointed his camera in my direction in Restaurant Heimat in Frankfurt on December 6th, 2017 there was no turning back. In spite of that, there’s also no doubt that Christoph Koch and Gunnar Swanson of the film production company frames2art are equally responsible for my current predicament. We’re all guilty as charged!

Guilty? Yes, of taking the feminization of wine in Germany seriously. I remember that around 1990 I got my first commissions from magazines to write stories about women winemakers. At the time this seemed like an important thing to do, because there were rather few of them and they often struggled for recognition. However, during the next decade the situation for women in the German wine industry changed dramatically for the better. As a result I changed approach to watching out I didn’t miss the talented, then treating them exactly like the guys. In spite of this when I began a year as a guest student in Geisenheim/Rheingau in October 2008 I was pleasantly surprised to find nearly half the students were women. Now they’ve got a better position in the German wine industry than in that of almost any other major wine producing country. But why make a movie about all that?

I don’t think it would have happened if I hadn’t met Christoph and Marco back in the spring of 2007 at the Darmstadt/Germany HQ of the email-provider T-Online. There, with a minimum of technology and time we shot what is still my most successful YouTube video (see: www.youtube.com/watch?v=L8J8tBreHTQ) with around 10,000 views. Not bad considering it’s in German without English subtitles. I returned to that studio a couple of times and developed a great creative relationship with them, but then our paths separated. Fast forward to an Italian Café in Wiesbaden on February 9th, 2017 and my first conversation with Christoph in a decade. He convinced me that although I was very well aware of the wine winemakers the wider public’s awareness of the feminization of wine was lagging well behind. That provided compelling logic for his proposal to shoot a 100 – 120 minute movie introducing the world to this social and cultural change in Germany. 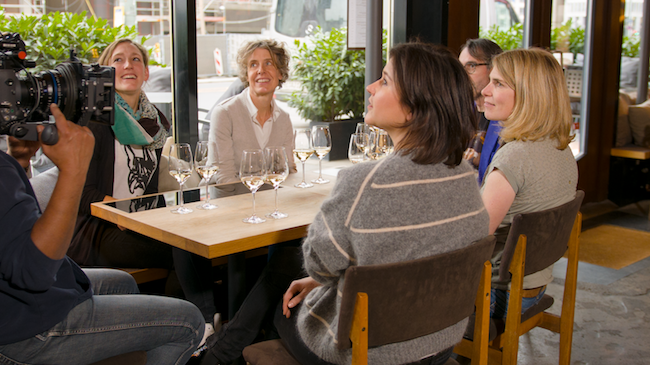 Now I’m in the same filmmaking boat with four successful thirty-something women winemakers: Theresa Breuer of the Georg Breuer estate in Rüdeheim/Rheingau, Dr. Eva Vollmer of the eponymous estate in Mainz-Ebersheim/Rheinhessen, Katharina Wechsler of the eponymous estate in Westhofen/Rheinhessen and Silke Wolf of Shelter Winery in Kenzingen/Baden. Their names are familiar to anyone who closely follows the astonishing renaissance of the German wine industry since the last turn of the century (the most important theme of my writing).

When we told this quartet we wanted to follow them over a period of about 18 months as they each produced a dry Riesling wine, from pruning of the vines through to the finished wine being tasted for the first time (in July 2019) they accepted the challenge, but collectively demanded I do the same thing. It’s true I once made an experimental wine but it was a dry Müller-Thurgau and that was back in 2009. That’s why yesterday, I suddenly found myself with a pair of old vine pruning shears in my hand. So help me God!

German wine usually comes in six packs, so we decided to add a young woman winemaker at the very beginning of her career to add a yet younger perspective. A casting day at the wine university in Geisenheim left us with an extremely difficult choice, because we had 10 strong candidates for this role. Finally, we decided in favor of 27 year old Carolin Weiler of the tiny Weiler estate in Lorch/Rheingau who abandoned a career as a kindergarten teacher to study wine with the goal of taking over her family winery. Another of the candidates, Peam Saisombat, became my assistant, and that made me feel a lot more confident about making my first ever Riesling.

All of this is unusual enough, but the way we have, financially speaking, thrown ourselves off the trapeze without a safety net is completely new to me. From spring 2010 through fall 2012 I co-wrote and anchored eighteen TV shows (30 minutes each) called Weinwunder Deutschland together with director Alexander Saran. That project was bankrolled by BR, the state TV network of Bavaria and was my largest source of income during that period. We started shooting WEIN WEIBLICH without any of the approximately 80.000 Euros we need to complete the project, a figure that doesn’t include any pay for the core team of Christoph, Gunnar and I, or for the women winemakers!

We seriously need your help. By giving us your financial support, however large or small, you will become part of our team and be able to follow our work on this daring documentary movie. Please visit out crowd funding page at: