London Wine Diary: Day 1 – IT LIVES! My 2018 Nonnberg Riesling for Wein Weiblich the Movie is fermenting! 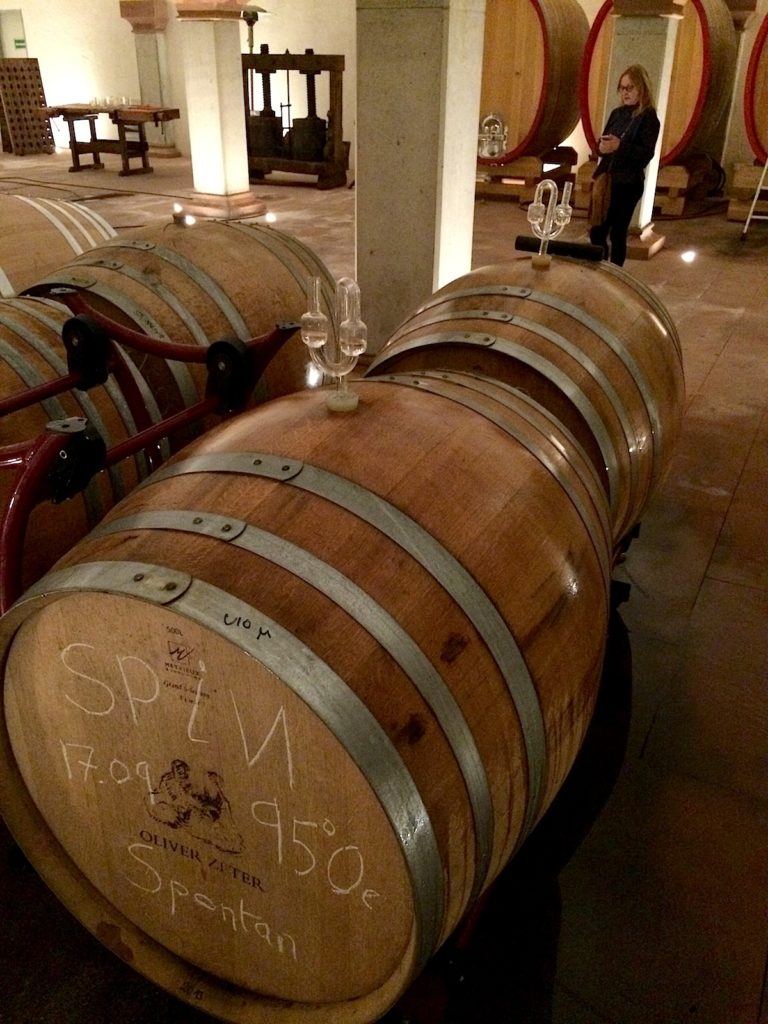 IT LIVES! My two 500 liter barrels of Riesling picked in the early morning of Monday, 17th September in the Nonnberg site of Wicker/Rheingau are now both fermenting. Both barrels were filled with the same must late on the evening of the day of harvest. The one at the front of the picture is very slowly undergoing spontaneous or wild fermentation, while the one behind it was inoculated with Heiligenstein yeast and is fermenting much faster. The goal is a bone dry wine and based on the most weight of 95° Oechsle (straight from the press) I expect the wine to weigh in at around 13% alcohol. Due to a pH of 3.5 in the must, which means very low acidity, I felt there was no option, but to add 1.5 grams per liter of tartaric acid. Some of you will hate me for doing that, because it’s not “natural”, but if I hadn’t done that the danger of an unwanted malolactic fermentation would have been high, and then the wine might have ended up tasting like melted butter. This is Riesling, not warm climate Chardonnay, so no thank you!

Sadly, there’s no point in describing how the fermenting wine tastes now, because it will change from day to day or even hour to hour. I will start talking about the aromas and flavors after alcoholic fermentation is completed and a small amount of sulfites have been added to prevent oxidation. I want the finished wine to live for at least a decade and for that there’s no serious alternative to adding sulfites. Then the wine and its flavors will gain a certain stability. I won’t be hurrying to add that sulfur though (by the way, none was added either to either the grapes or the must), because the longer it is delayed the more chance the wine has for positive aromatic development.

As those of you who have been following my work in the 6 rows of Riesling vines I borrowed for the year from Reiner Flick of the Flick estate already know, I am making this wine for Wein Weiblich aka Wine, Women, Rhine the movie. De facto I am in competition with four talented young professional women winemakers, each of whom is also making a 2017 vintage dry Riesling in front of the movie camera. As the only amateur winemaker in the group I am clearly the one who’s wine is most likely to bomb out in the final scene of the movie: a blind tasting of the finished products at Restaurant Heimat in Frankfurt in early July 0f 2019. At the beginning I was sure that I could only fail that test, then I acquired a very capable assistant called Peam Saisombat and that changed the calculation of my chances quite considerably. She is from Thailand where she already has a degree in agricultural science and is studying winemaking at the Geisenheim Wine University. 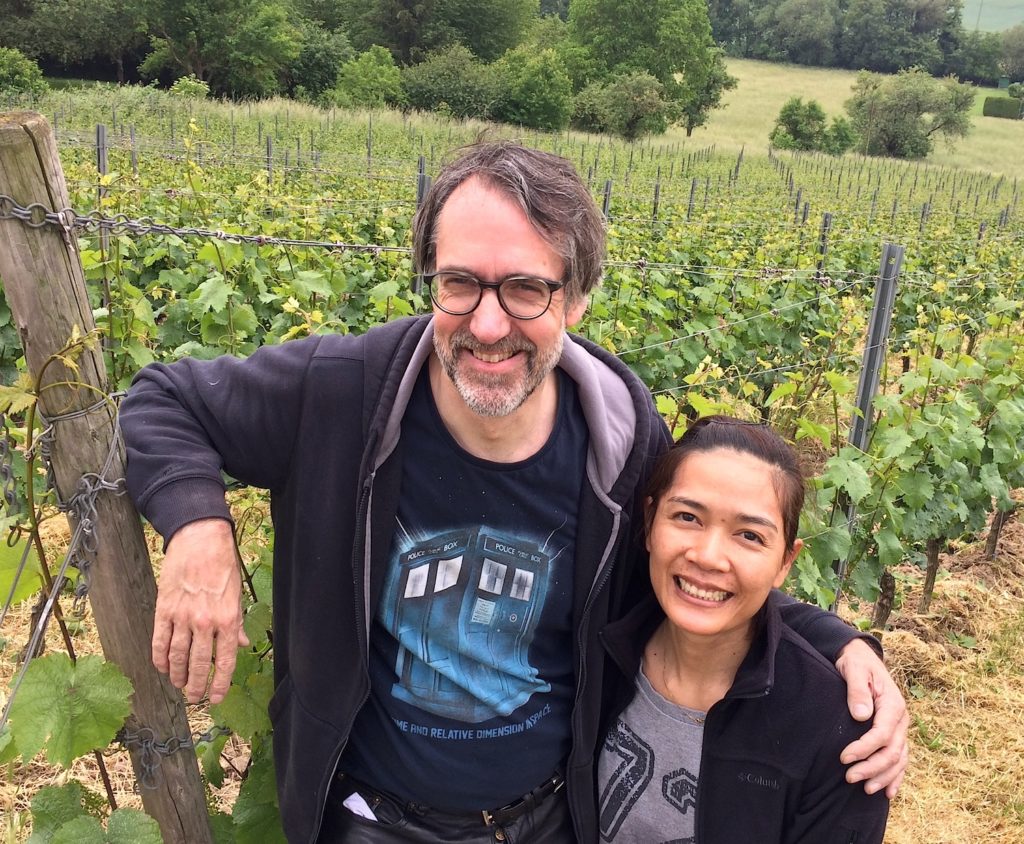 Here we are together in the vineyard after the end of a hard day’s work. To give you an idea of how precise Peam’s vineyard work is here are a few photographs she took to document work she did alone in the vineyard (necessary when I was in Spain in late June and in Italy in August for JamesSuckling.com). The first photograph shows the result of twisting the vine shoots around the top wires rather than cutting the tips off them as conventional winegrowers do. The theory behind not cutting the growing shoot tips is that they provide competition for energy and nutrients to the developing bunches, which remain smaller and looser than would normally be the case if the tips remain intact. The contrast to the rows of vines on the left of the photograph that Reiner Flick’s team cultivated is immediately obvious. The canopy of our vines is lower and I am sure that during the long hot and dry months of the summer they used less water than the vines on the left. 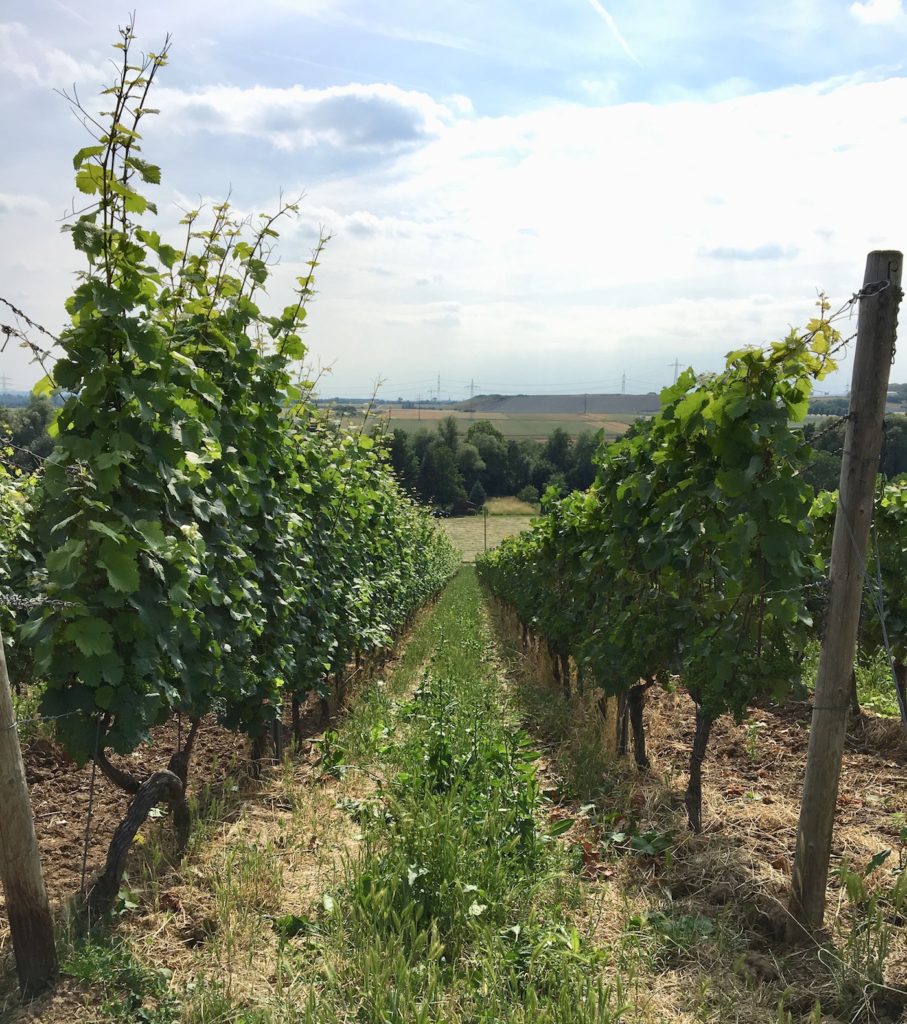 Something else that we did that was different to Reiner Flick was to “halve” the bunches of grapes that struck us as being too fat and compact. Because I was on the road Peam did this by herself. No knife was necessary, just two hands a sharp eye (which she certainly has!) She grasped the upper part of the bunch with her left hand, then twisted off the lower third with her right hand. The theory is that shocked by the wound this inflicts on the vine it tries to compensate for the lost fruit by stretching the bunch, which once again loosens it. A loose bunch is much less likely to rot and the berries at the back of it also get more light exposure. Here’s a picture that also gives an idea of how this procedure also reduced the yield somewhat. In fact, ripening as measured through the sugar content of the grapes progressed rather fast until the drought pulled on the brakes somewhat at the beginning of September. However, I feel pretty sure from the way the grapes tasted at harvest that the aromatic development during the last couple of weeks before harvest continued apace. 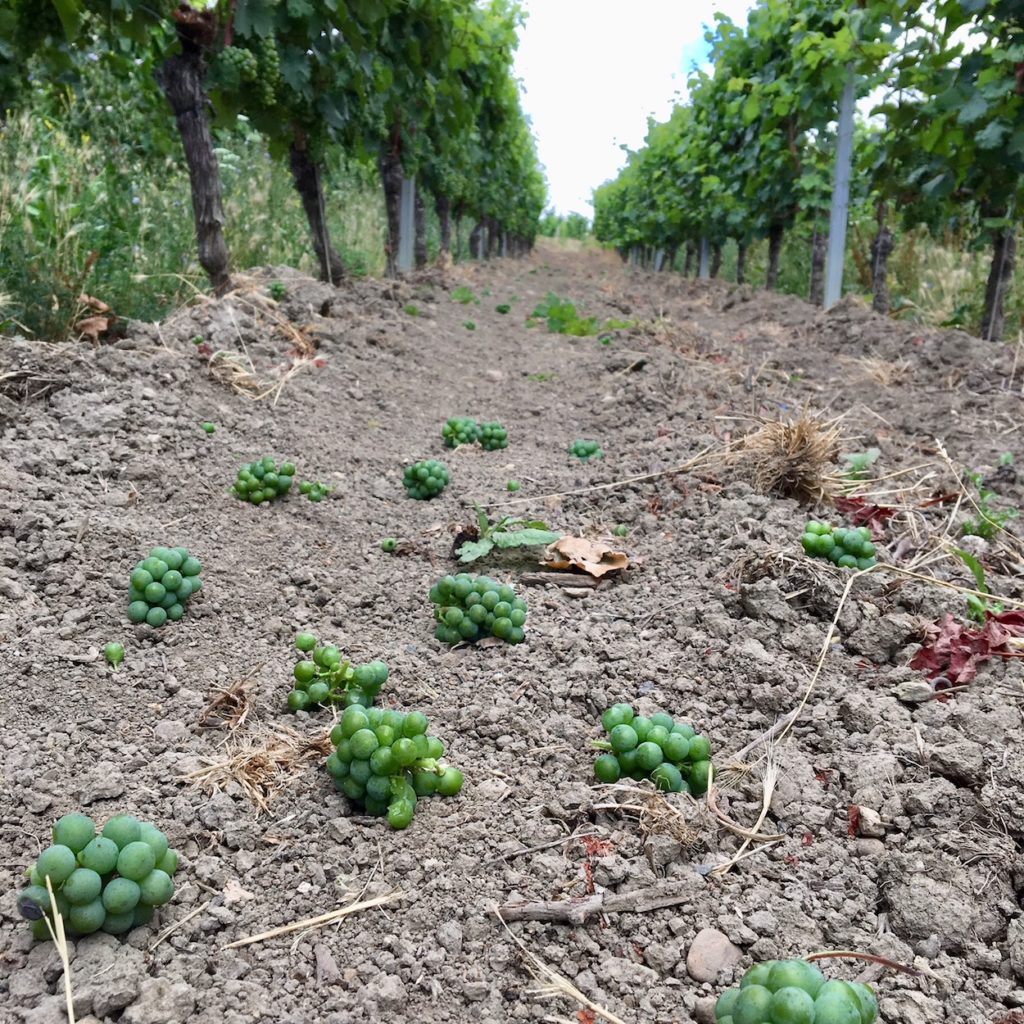 2018 is a really extreme vintage thanks to the heat and drought. My gut tells me that in some vineyards quality will be low because the vines were too stressed during the summer. My guess is that this will not only vary from village to village, but also from vineyard plot to vineyard plot depending on how well each has been tended over the last years. I think the special conditions in Wicker (in particular the very water-retentive soil), Reiner Flick’s very thoughtful cultivation and our own hard work prevented us being affected by that problem. If the very generous yield – much higher than 2017, 2016, 2015, 2014 0r 2013 – impacts quality is difficult to say now. The entire harvest team was in agreement that the grapes tasted really good at picking and we removed every berry we could find (it was only isolated berries) that looked less than perfect. It was less than 1% of the fruit!

The next posting will be all about how the two barrels of fermented wine actually smell and taste. I am expecting them to be very different from each other and hope that some kind of blend of the two will be best. It might be a 50/50 blend or maybe an 80/20. We shall have to wait and see. For more information WATCH THIS SPACE or go to: