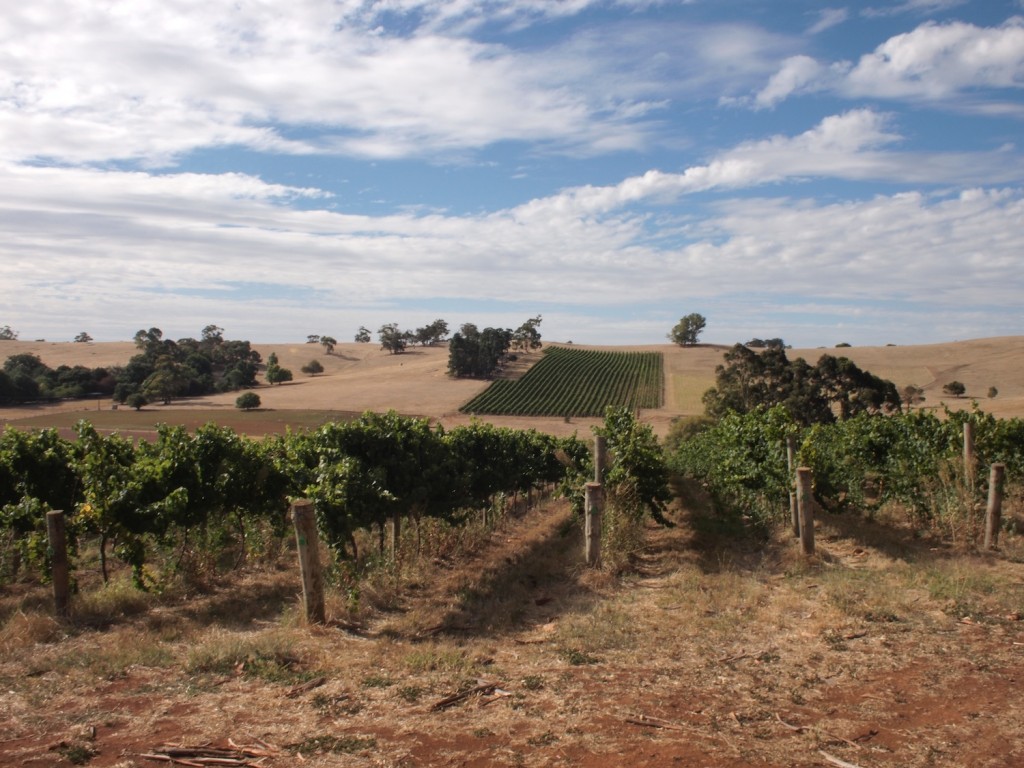 These Riesling vineyards are in the Clare Valley of South Australia, which on paper is warmer than the Barossa Valley. To find out how that works read on…

No numbers are more fundamental to winegrowing than heat summations. These numbers (there are various ways of calculating them, each bearing the names of their inventors e.g. Winkler, Huglin) express the total amount of warmth in an average year or a specific year in a specific location. The heat summation of a vineyard location is the bottom line of the entire winegrowing enterprise, because each grape variety requires a certain minimum amount of total warmth for the grapes to ripen. As I mentioned a few days ago: no ripe grapes, no good-tasting wine.

Riesling is supposed to be the ultimate cool climate grape variety and it’s certainly true that varieties like Cabernet Franc, Merlot, Cabernet Sauvignon, Syrah, Grenache and Carignan all require more total warmth in order to ripen (I list them in order of increasing warmth requirements for ripening). On the other hand, in Germany Riesling is usually picked later than noble varieties like Sauvignon Blanc, Gewürztraminer, Pinot Blanc, Pinot Gris, Pinot Noir and Chardonnay, so it is definitely not early-ripening. This means that Riesling requires quite a good amount of warmth to ripen fully.

In this connection it occurs to me that one reason Riesling has nonetheless been acclaimed as the ultimate cool climate variety is the way German winegrowers became very adept at making drinkable wine from half-ripe Riesling grapes. Why did that happen? Because before global warming made itself felt in Germany around a quarter of a century ago they had to. The last vintage in which winegrowers all over Germany struggled to ripen Riesling and make wines that didn’t taste sour and green was 1987! That’s the reason that the 2010 vintage was so mixed in Germany. Although the ripeness was high so, unexpectedly, was the acidity content of the grapes, which sent many young winegrowers unfamiliar into a tail spin. Some made serious mistakes in the cellar, because they were used to working with grapes and young wines with good ripeness and moderate acidity. Due to climate change, in Germany too low acidity in wine (though seldom in Riesling) is a more frequent problem than too high acidity!

I put together the table of heat summations (all for the growing season, all on the HDD system) in order to make at a glance comparisons between a wide range of different winegrowing regions possible. The idea is to try and answer the seemingly unnecessary question: is Riesling a cool climate grape variety? The regions which have a significant Riesling production are printed in bold, and the others are there to give a contxt. It’s worth taking a longer look at this, because I think it has something surprising to say.

The figures show that although Riesling doesn’t grow in the warmest regions of Australia or Southern France, it does grow in a range of climates from genuinely very cool parts of New Zealand, through the fairly cool climates of Germany and Alsace in France in to the much warmer climates of Washington State in the US, Western and Southern Australia. How can this be squared with Riesling’s status as a cool climate grape variety? I mean, the figures show Clare Valley is even slightly warmer than Barossa Valley is where many of those huge Shiraz reds Robert Parker slathers over grow!

This question became particularly pressing for me on my first day in Clare Valley back in 2000. It was almost 100° F and a warm dusty wind was blowing in from the desert. The Riesling vines in Jeffrey Grossets Polish Hill vineyard were obviously suffering from the heat (in fact they had completely “shut down”), yet the Grosset Rieslings had tremendous freshness and were as aromatic as any of the world’s other great dry Rieslings. The answer came at the end of the day when we climbed out of the swimming pool behind Jeffrey Grosset’s house and and got dressed as the sun was going down. Just in time! The temperature plummeted within minutes and there was no question of remaining outdoors any longer. Over dinner Grosset and his colleague Andrew Mitchell (pictured below with some of his Riesling vines) also explained that daytime temperatures usually moderated for the last 4-6 weeks before picking. 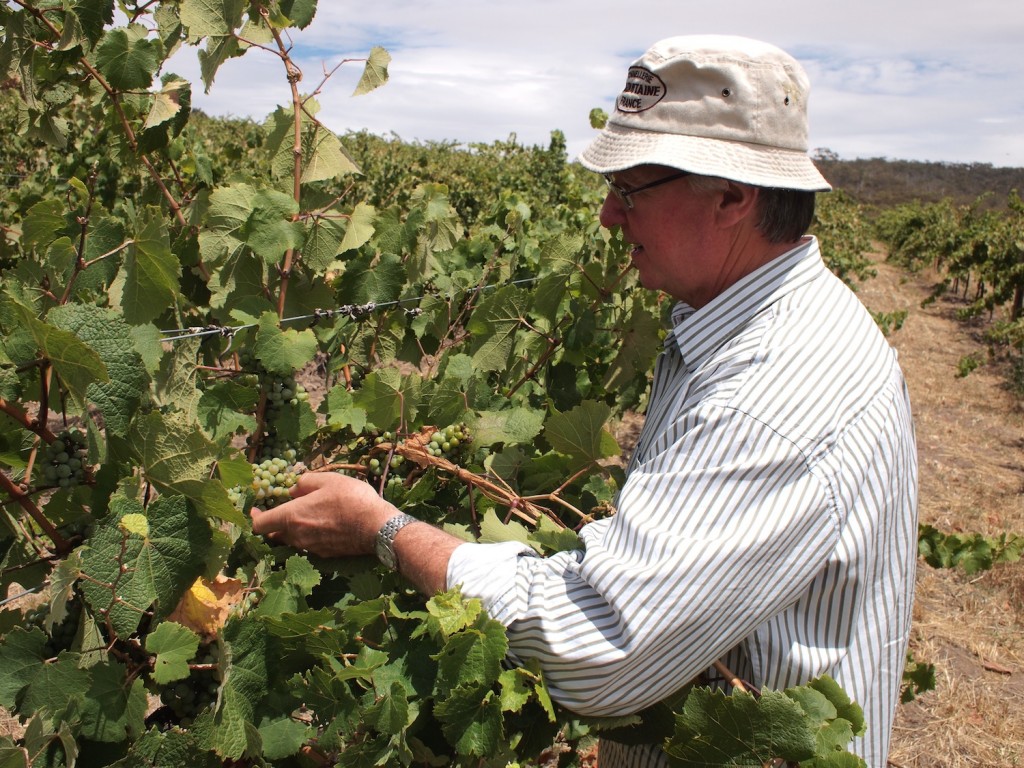 These factors are common to all the warmer regions where Riesling grows and are a crucial to their ability to produce exciting wines from my favorite grape variety. One problem with heat summations is that they give you no idea of the range of daytime-nighttime temperatures (technical name: diurnal variation). For example, in Barossa Valley the nights are generally milder than in Clare Valley. For Riesling in a generally warm climate this is less than ideal, because it leads to the loss of too much acidity during the ripening process and thereby to wines which don’t taste fresh enough (at least when compared to those which ripened in places with cooler temperatures. Cool temperatures – daytime or nighttime – help preserve acidity and certain aromas.

Another factor which heat summations ignore is the effect of vineyards with optimal exposure, since they give figures for weather stations not amongst the vines. The effect of exposure and inclination is particularly great for late-ripening grapes growing in northerly latitudes. Riesling on the Rhine and Mosel is a perfect example of this constellation of factors, and that’s why the best sites for the grape there are brutally steep south to southwest facing hillsides. You have to add nearly 300 points to the heat summation for the Geisenheim/Rheingau weather station (at the edge of town) to get a realistic figure for the heat summation of, say, nearby Schloss Johannisberg’s most favored slope (which brings it up to about the figure of Bordeaux!) The same applies in Central Otago in New Zealand – another great Riesling region, pictured below – where depending upon exact location the heat summations range from just 850 to 1100. 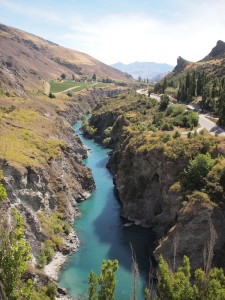 All of this leads me to the conclusion that Riesling is rather a special grape variety, since it needs quite a bit of warmth to ripen fully, but too much warmth during the ripening process makes the wines taste less interesting.  It may sound like a contradiction in terms, but Riesling is a warmth-loving grape which also needs to fear the sun, at least the wine grower must fear the sun if he is in a warm region or it is a particularly warm year in a generally cool location. For example, in 2003 due to the “Summer of the Century” the heat summation for Geisenheim in the Rheingau was equal to the average heat summation is for Montpellier in Southern France! A once in a century exception? No. The heat summation for 2006 in Geisenheim was slightly higher still!  That, of course is the influence of climate change. However, I’d say that any climate which fulfills the unusual combination of conditions needed to grow exciting Riesling seriously cool!