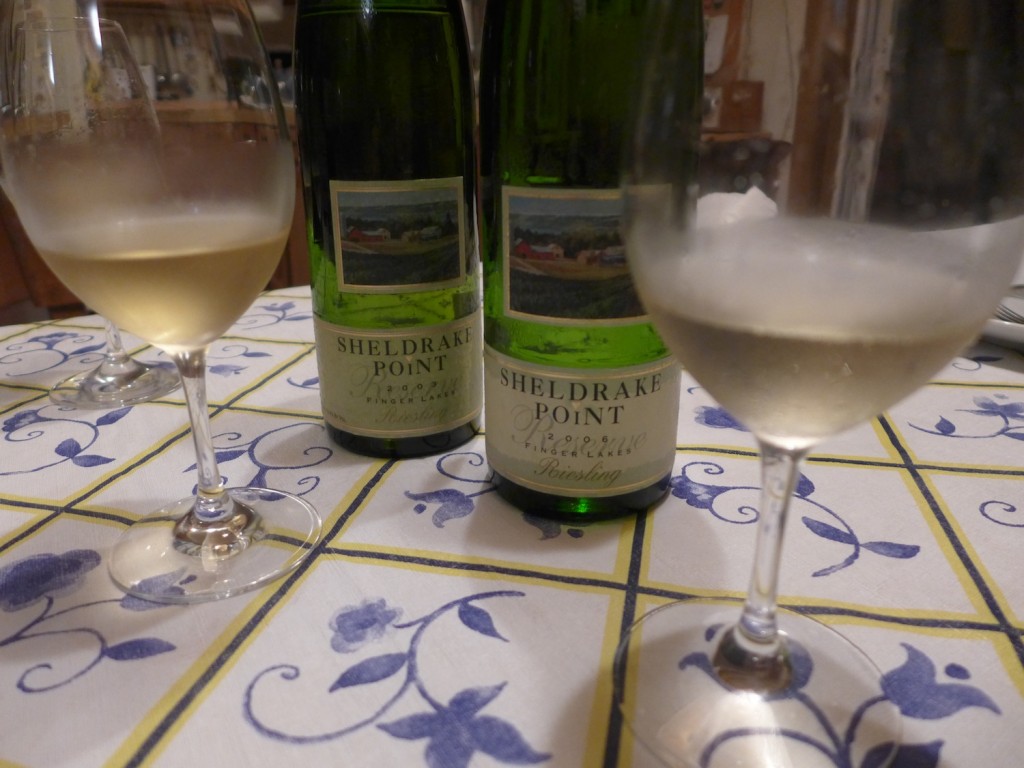 In England where I grew up and was raised we say, “the proof is in the pudding”, meaning that theories are fine, but the crucial test is how things function in the real world. Last night Bob Madill of Sheldrake Point Vineyards here on Cayuga Lake in Upstate New York  and I undertook such a “pudding” test took place on the dinner table. Bob pulled out of his cellar two mature vintages of Sheldrake Point’s ‘Reserve’ dry Riesling, 2003 (the first vintage) and 2006. The point was not to prove that these wines can keep for that length of time, rather to show that dry Rieslings from the Finger Lakes with a high natural acidity content which taste austere (but not unripe) as young wines can develop very positively in the bottle. The 2006 was always a sleek wine with a pronounced acidity, but it has gained a lot of elegance since I first tasted it in its youthful. The patina of mature aromas was delicate rather than dominant, in no way masking a lemony freshness that keeps the wine very lively. And it was that balance of fresh and mellow which made me linger long enough to find many subtle herbal and rooty (for example celery and parsley root) nuances in the wine. In my book that adds up to dry Riesling greatness, and I’ve tasted a bunch of dry Rieslings of this vintage from various part of Europe which were not as impressive as this wine. 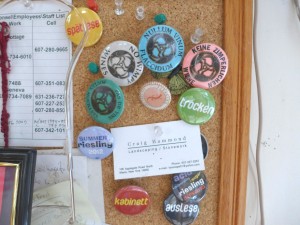 In contrast, the 2003 was bone dry and had a slight bitterness in the back of the mouth. At first it seemed very mature, but, as so often happens with mature Rieslings, after leaving it some 20 minutes in the glass it became more lively (although this counter-inuitive, since contact with the air means oxidation and that ought to make the wine seem older/more tired). It was a good first shot at what the 2006 does so well, and has become the house style here. I can’t wait to taste the 2012 ‘Reserve’ dry Riesling again, which passed the “pudding” test with flying colors the first time I encountered it back in March. These are wines which show what this region can really do with dry Riesling, and as Bob Madill said last night, “we’re just scratching the surface”. More about the enormous potential of this region tomorrow.

One Response to On the Riesling Trail: Day 1 – Finger Lakes Revelation