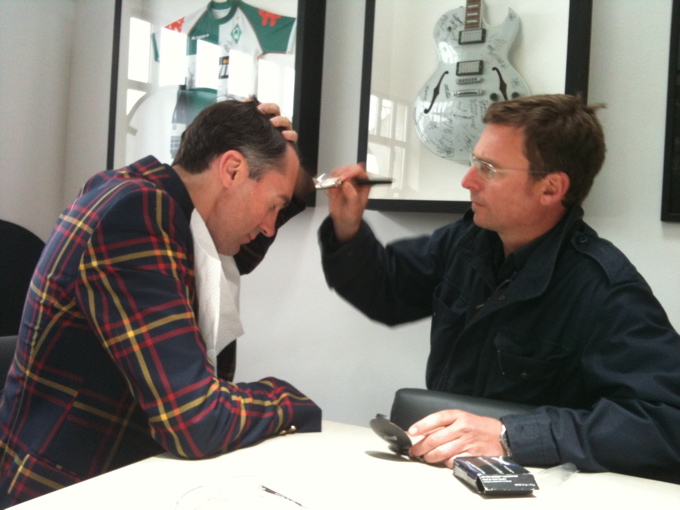 Until now many people have known me as the British wine journalist living in Berlin, others as the wine columnist of the FRANKURTER ALLGEMEINE SONNTAGSZEITUNG or as the author of many books on wine (mostly in the German language), but at 16:30 Central European Time on Christmas Day all that will abruptly change +++ Then the first episode of WEINWUNDER DEUTSCHLAND will be shown on the BR3 channel (also on www.br-online.de) and untold thousands of unsuspecting Germans will suddenly think of me as the funny Englishman in the boldly-checked jackets +++ The above photo by camera assisstant Florian Bschorr on location at Weingut Tesch in Langenlonsheim/Nahe with director Alexander Saran (who doubled-up as our make-up artist !) shows me slightly differently from how you’ll see me from the 25th December on the small screen +++ A German colleague once said to me, „one claims that one doesn’t want to burn down the forest, then you find yourself playing with matches“ and that’s exactly how I feel about this TV-project +++ I always said that I didn’t seek fame, just wanted more people to read my work, but now I’ve done something which stands a serious chance of turning me into a houshold name +++ Maybe it was a good thing that due to the travel chaos I couldn’t fly to Munich on Monday morning for the press conference for the first series (of 6 episodes) of WEINWUNDER DEUTSCHLAND, because that way the newspaper journalists couldn’t compare the on-screen Stuart Pigott with the real me and find the latter lacking +++ It turns out we’ve already created a controversy before a single second has been broadcast, a couple of paranoid people in the organic wine scene threatening legal action against us on the basis of a couple of words in a BR press release ! +++ On the other hand we feel the growing public anticipation for the first show about wine on German TV that dares to entertain as well as inform, also with a picture quality far above the norm thanks to cameraman Sorin Dragoi +++ When you consider how German television is stuffed full of dumb cookery shows and narcissistic celebrity chefs, it’s absurd that wine has gained so little space and even less imagination during the last years, but that, of course, is our Big Chance +++ This was something we didn’t think about much on location though, because there was always so much pressure on +++ It only really hit me when I was in the studio of Megaherz in Munich at the beginning of the month to record the voice overs with recording engineer St. Ingo +++ In spite of the poor quality screen I saw the cut version of our work on, at the end of the first day’s work I suddenly thought, „Shit, it doesn’t only function very well, it is also very different from everything else I’ve seen on TV lately !“ +++ Of course, whether you like it or think it’s shit, is up to you and the last thing I want to do is to push you in any direction, but take a look at the second picture from Florian Bschorr and tell me you don’t want to see the first show 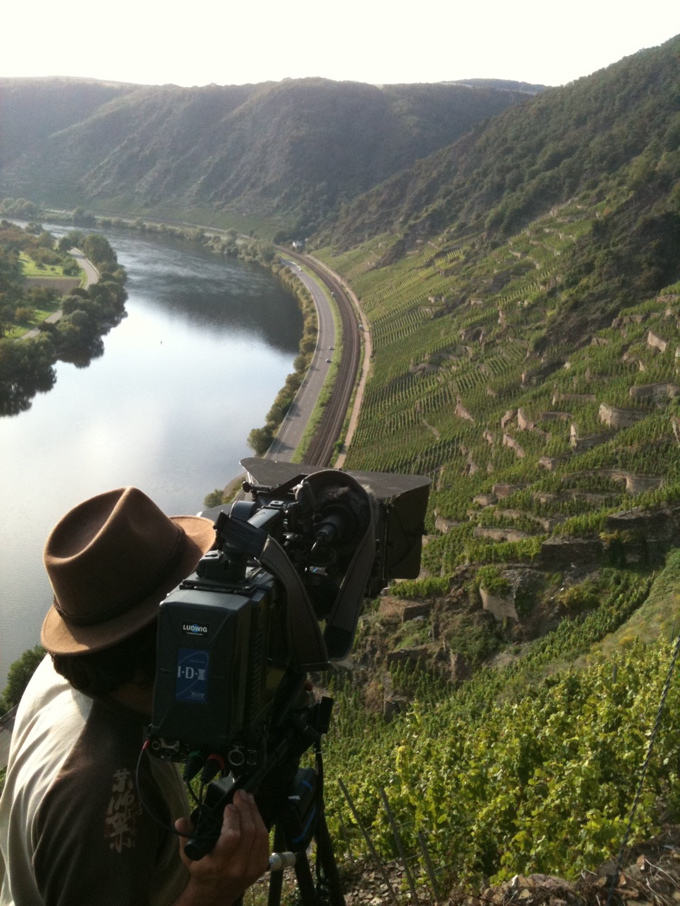