My apologies for the delay in getting this story to you, but I refuse to put half-baked material up on my blog, so when the appointments are stacked up as they were the last few days here in the Willamette Valley of Oregon, then it’s necessary to wait. You see, the purpose of this location in cyberspace is to give that old-fashioned thing considered opinions and – however amusing or entertaining the material sometimes is – thoughtful analysis of what’s going on in the world of wine. You’ll also need some patience to read through to the end of this blog posting to find out who the young man pictured above is!

Tuesday night the 5th Riesling Rendezvous conference in Seattle dissolved in a deep pool of wine, beer and cocktails after three days of Deep Immersion Riesling Group Therapy. From all the happy faces I saw I’d say that this was eminently successful and that enormous amounts of positive energy were exchanged between people from all points on Planet Riesling. Suddenly, the global Riesling community was no longer virtual, but real and the Riesling spirit of openness and mutual support (and criticism) was palpable. Dear Mr. Trump, Dear Mrs. Clinton, please note the remarkable possibilities this grape offers, and choose the true path of Riesling before it’s too late!

As at the previous four events many of the most exciting moments were the big surprises in the blind tastings of dry and sweeter Rieslings. This time the big winner was Canada, a Riesling producing nation with about 1,000 hectares / 2,500 acres of vineyards where the leading producers have recently made a leap forward in vineyard management and winemaking. A couple of the producers who’s wines shone – Cave Spring in Niagara/Ontario and Tantalus in Okanagan/British Columbia – were already known to many of the participants of Riesling Rendezvous. However, Martin’s Lane and Synchromesh both from the Okanagan/BC (and both in the tasting of off-dry and sweet Rieslings) were not well known and their wines also wowed the crowd. How they tamed some of the highest acidities of any wines out there and achieved a startling balance was a minor miracle. That is just another sign of the dynamism of the global Riesling community.

Then there was the 2015 Dry Riesling from Scriptorium, the very first vintage from Sean O’Keefe’s new project on the Old Mission Peninsula in Northwestern Michigan with its floral and exotic nose, and a great juiciness. That the wine was bottled just two weeks ago didn’t show at all. At the other end of that scale were several dry German wines from the 2014 vintage that were still very youthful and shy, like the Idig GG from Christmann in the Pfalz and the Morstein GG from Wittmann in Rheinhessen. They clearly needed more time to show their best, unlike the 2014 Kastanienbusch GG from Rebholz that wowed with aromas variously described as licorice and violets and prototypic raciness.

Although the reaction to the wines from the Finger Lakes in Upstate New York was not marked by quite the same degree of astonishment they also made quite an impact too. Just imagine being a young winemaker like Kelby Russell of Red Newt Cellars and finding that your new high-end dry Riesling – 2014 The Knoll, the second vintage of this wine – was placed between the 2014 Kellerberg Smaragd from F.X. Pichler and the 2013 Schütt Smaragd from Emmerich Knoll, two of the most famous dry Rieslings from the Wachau in Austria with track records going back decades. The amazing thing was that although The Knoll is built on a smaller scale than those muscular (but ravishingly beautiful) Über-Rieslings it easily held its own between them.  Although it’s placing at the beginning of the dry wines blind tasting was less challenging the 2014 Dry Riesling from Ravines also shone and had a harmony many people in the audience didn’t realize was possible in the Finger Lakes.

Does the last wine in a blind tasting have a psychological advantage due to its favorable position? Maybe, but that doesn’t alter the fact that at the dry Riesling blind tasting the 2012 Ürziger Würzgarten GG “Reserve” from Dr. Loosen had great succulence, elegance and vitality. For a number of colleagues I talked to this was the wine of the tasting. 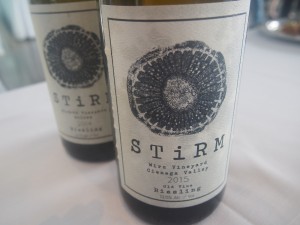 The other thing that these events are great for are the astonishing discoveries that just drop out of the sky. This time that was Ryan Stirm of the Stirm Wine Co. in Santa Cruz, pictured above, who has just made some of the most striking new dry Rieslings in California. I say “striking”, because these wines were controversial due to their textural richness and rather supple acidity and 13.5% natural alcohol (in part due to high grape ripeness and in part due to malolcatic fermentation). Is this what dry Riesling should taste like? Clearly not for some people, but for me this is just another possibility within the expansive stylistic range of the Best White Wine on Earth. The 2015 Wirz Vineyard Old Vine Riesling (planted 1964) from Stirm is not yet released yet, watch out for it!

Many thanks once again to Chateau Ste. Michelle in Washington State (the world’s largest Riesling producer) and Dr. Loosen of the Mosel for hosting this great event that combines seriousness with a dangerous amount of fun for everyone who attends!