Die Burgstrasse, the main drag of the pulsating metropolis of Eppstein 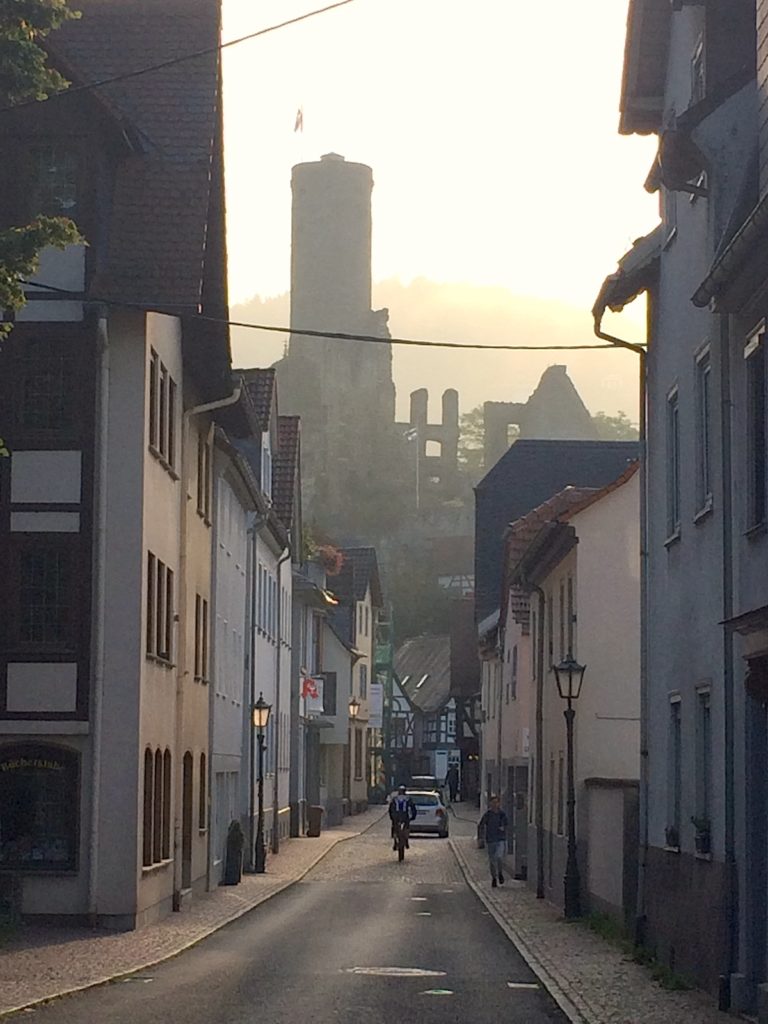 Many readers of this blog and many of my acquaintances still don’t realize that at the end of October 2016 I was suddenly thrown out of my apartment share on Bedford Avenue in Williamsburg/New York City. As a result of the short notice and the heavy workload resulting from me joining the JamesSuckling.com team that summer I couldn’t find a new place in time. Therefore four years of regarding New York City as my second home ended abruptly at 8am on October 31st 2016 when I stepped out of the door onto Bedford Avenue for the last time. This harsh blow was softened by the fact I’d already found another second home in the world’s least well-known major conurbation, the story of which begins here: Welcome to Weltstadt Eppstein: Part 1

I snapped this atmospheric photograph recently at the end of my morning run through the mean streets of my new second home. It shows the Burgstrasse, the main drag of the pulsating metropolis of Eppstein close to the much less important nearby city of Frankfurt, which is unjustifiably far better known. The main reason for that fame seems to be the fact that Germany’s largest airport was named after that city instead of Eppstein, plus all the ugly towers erected in Frankfurt by major German banks before the fallout from the Financial Crisis made many of them look really dodgy. How much more beautiful is the tower of the Burg Eppstein castle that crowns one of the massive slate outcrops dotted around this city! Unlike those Frankfurt-based banks it can’t fail, because it already fell down (and was partly taken down for use as building materials) leaving the imposing ruins I can see from my desk. Eppstein über Alles!

Of course, for those who never heard of Weltstadt Eppstein – in English, world city Eppstein – before this blog posting that last statement might look seriously daring and in urgent need of supporting evidence. The conventional journalistic way of proving such statements is to wheel out all kinds of imposing statistics – seven, eight and nine figures long! – but this is also exactly what those Frankfurt banks do to support claims of their own importance. I suggest that given how dodgy they are this bigger-is-better logic is highly dubious, and I also refuse to get sucked into the childish worshipping of rows of zeros. Eppstein doesn’t need a pile of statistical bullshit in order to stake its claim to greatness. Just look at the street in the photo and you know this is a happening place.

I have to admit that when I first started making the kind of extended visits to Eppstein that I’d previously been making to New York City something seemed to be missing up here in the metropolis of the Taunus Mountains. When I stepped out of my apartment onto the sidewalk of Bedford Avenue in Williamsburg on any day or evening I was confronted by the highest density of hipsters anywhere on Planet Cool. This empirical observation was recently backed up by MIT when they tested their revolutionary new hipstometer on my block and the device exploded after the reading immediately went right off the scale! When I first arrived in Eppstein the hipster density was exactly zero and I felt as disorientated by this as an astronaut having his first experience of weightlessness!

Then came a miracle, what I now call the Great Eppstein Miracle! It happened one day when I was on the way to the nearby Rheingau winegrowing region. As I walked to the local railway station (the S2 line provides a quick connection to big, bad Frankfurt) I spotted an authentic hardcore hipster on the Burgstrasse. Then I saw a couple more of them get into the train. At first I thought this might be some kind of anomaly or my eyes were deceiving me, but since then I’ve often seen hipsters on the streets of Eppstein and clearly several of them now actually live here. Since the frequency of these sightings is increasing I’m forced to the conclusion that my new second home is slowly morphing into an alternative version of my previous second home. Eppstein is cool, or at least it will be one day rather soon.

Now you’re probably wondering what all of this has to do with wine, the prime focus of this blog. I promise you that if I told you the answer to that question now you would be amazed by the connection between Eppstein and your own wine consumption. However, revealing that now would take all the suspense out of the story of my new second home, and you might not bother to continue learning about the world’s least well-known major conurbation. That’s why you must wait for Welcome to Weltstadt Eppstein: Part 2 for that extraordinary revelation.